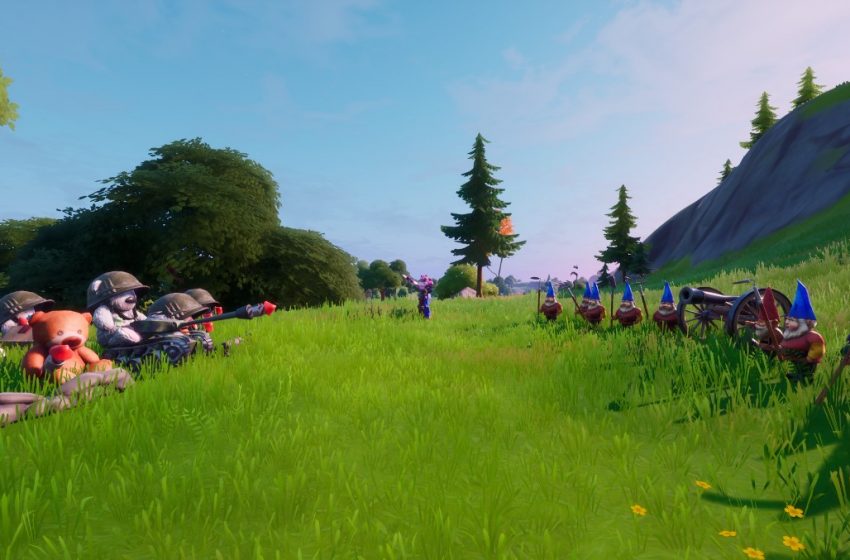 The Gnomes and the Bears are still going at it in Fortnite, which means a new secret challenge. If you can find where the Gnome and Bear armies are facing off, you can intercede and stop the madness.

The first thing you will need to know is where to go. As usual, things are happening close to Weeping Woods, so head to the point marked on the map below.

When you get there, you will find the Bear, and Gnome armies have both taken the field, and it looks like a bloody battle will soon be underway. The good news is that you can put a stop it all. Walk up to the bear’s tank and interact with it to disarm it, then do the same to the Gnomes cannon.

Now, they can’t kill each other, and you will have scored yourself some extra XP. Is the end of all the fighting, and will peace finally happen between the two sides?

It feels unlikely, as they have had a secret war all season, with casualties on both sides. There have been kidnapping, torture, daring raids, and now a full-scale battle between them, so I imagine this bad blood is not over yet.

If anything, the only thing that has kept anyone alive has been player intervention, and without us diffusing the situation, then more Bears and Gnomes would surely be dead.

We assume that there will be more violence on the way, and it will once again be up to us to be the voice of reason.

When is the exact release time for Serious Sam 4?

Bethesda back catalog could be coming soon to Xbox Game Pass

Xbox Series S gets a price cut in Japan