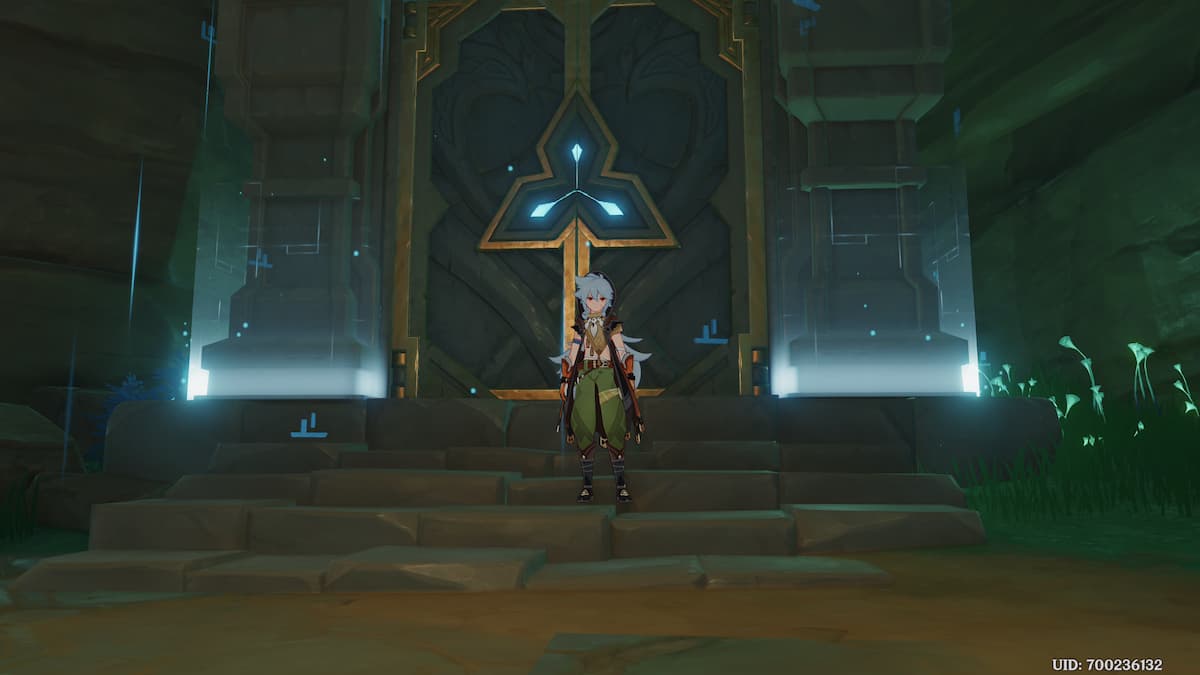 In Genshin Impact’s new region of Inazuma, an underwater mystery awaits. Players have noticed a teleport point and a domain resting beneath the sea to the north of Inazuma, and they are wondering how to get inside.

In this guide, we will show you how to do just that, but it is a long and involved process that will require quite a bit of work. First, make your way to the Araumi region on the north of the island.

Here you will need to activate four electro pillars which will allow you to activate the cube in the center of the area, near the round tower wrapped in roots. This will then open up a tunnel underneath the round tower. This is the same process that will get players to the Araumi Barrier for the Cleansing Defilement mission, so anyone who has already done that can just drop straight down.

Opening the Round Tower at Araumi

For the people who need to open the round tower, there are four different electro pillars you will need to activate. Two can be found very near the central cube, on the southern side of the tower ruins. You just need to hit them both with an electro ability to activate them.

The second pillar can be found behind the round tower, surrounded by a cube puzzle. It is a good idea to switch to a Bow user here, so break out Amber if she is the only one you have. Hit the blocks in the following order:

Once that’s complete, hit the pillar with an electro ability. Finally, the last electro pillar can be found down toward the coast.

With that done, drop down into the round tower and scan each of the three Earth Kitsune’s there with your Memento Lens. Three switches will appear on the wall behind them, so interact with those to open up the floor beneath you. Dro down into the room below and head left for the barrier puzzle, and right for the next cube puzzle to continue on toward the domain.

When you get to the cube puzzle, head to the back of the room and turn around. Hit the cube on the front left twice, then hit the cube on the back right twice. THis will cause a chest to spawn in nearby, and the water level in the hole in the floor beside it will receed.

Drop down into the water and swim all the way to the end of the corridor, then go up the steps. Turn around to find another cube puzzle. Switch back to a bow user if you need to , and hit the central cube twice to solve the puzzle. Turn around and use the door cube to open the grill behind you, go down the stairs and then go to the left, all the way down to the circular door.

Open it, then follow the long corridor toward a boss room that houses the Perpetual Mechanic Array. Float across the room to the stairs on the other side, and head up them. You will come to a large cavern with a teleport point in it that you should activate.

Keep moving through and you will come to a room with a puzzle on the floor. Step on the one raised block and a large number of blocks will pop out of the ground. Move all around the outside to the right, then when you reach an already lit up square, step onto the inner line and move all the way around on the left. Move into the next room and do the same thing, except head right on both the tracks. If you are confused, the video embedded above can help you.

And that’s it, the door to the Empty Boat of a Thousand Gates will rise out of the ground and you can interact with it to open it.