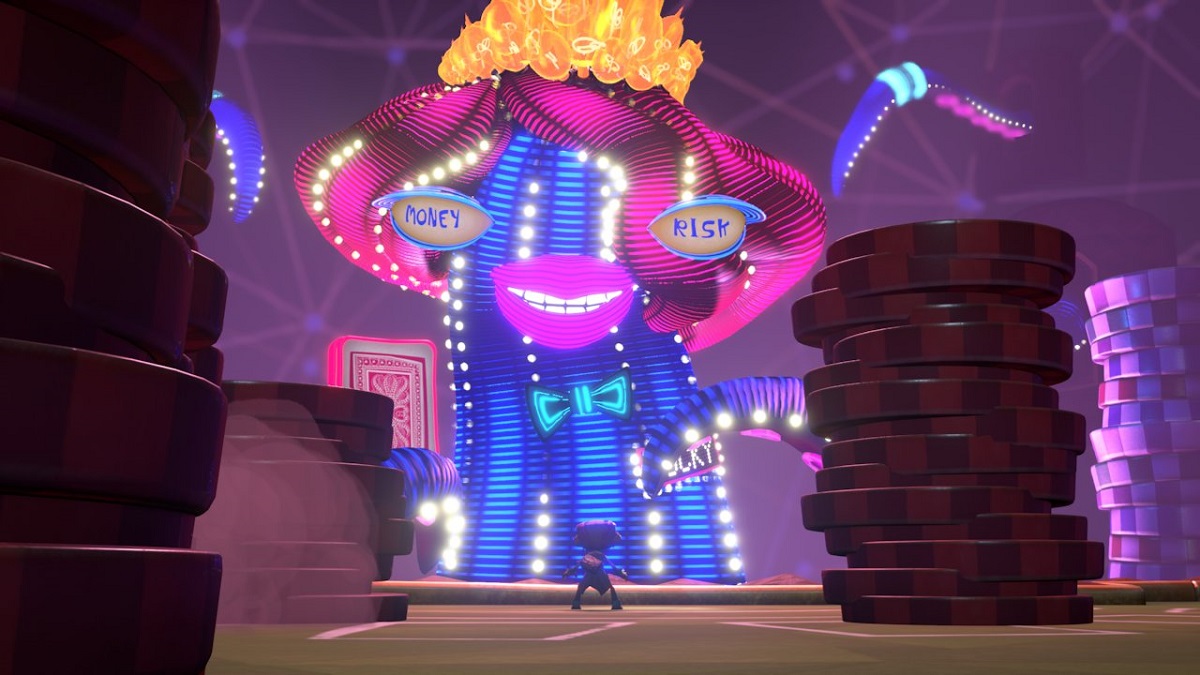 Her bountiful highness Lady Luctopus will be causing trouble for you in Forsythe’s head, and you’ll certainly need help if you don’t know what you’re doing. Her bombs and other tricks up her tentacles will keep you on your toes. Here’s a step-by-step way to beat Lady Luctopus in Psychonauts 2.

During the first stage of the fight, she will start drawing bomb cards. When this occurs, she’ll begin to barf out bombs across the arena. Make sure you avoid them. Now, hold up on your D-Pad to bring up the psychokinetic abilities screen. You’ll want to select the telekinesis ability that’s on the top of the wheel. Change it for something that isn’t useful right now, like the pyrokinesis skill.

Next, find a bomb you can pick up with your telekinesis powers. While avoiding obstacles, aim it at the blue tentacle on the right-hand side that’s holding two of your fellow interns in card form. One of its saps looks like a stereo speaker. Throw a bomb at it to activate a cutscene and the next phase of the battle.

After this, Lady Luctopus is dazed. Climb up on the platforms to the right embodied by table chips (not the potato kind) after using your Mental Connection. Ignore the enemy to the right and use the heart-shaped trampoline to get up to the higher platform. Now, use your PSI blast to eliminate the purple wall in front of you. Continue forward and jump inside her head. Beat up the green heart to deplete her health.

This is when it gets a little tougher. A handful of cards will block the bombs you’re sending to the tentacle to the left. In addition, Lady Luctopus will be sending a volley of attacks your way, so use the dodge roll when you can by pressing B (or the circle button on PlayStation systems). You should also watch the red lines on the ground so you can track where the cards will hit once they’re thrown towards you. After attacking the left tentacle twice, you’ll save two more interns. She’ll initially block your way up to her head with the cards, but she’ll relinquish them after a few seconds. Zoom your way up and be snappy as she’ll attack you as you’re trying to PSI blast her blockade.

You may be low on health at this point. Go to the back of the arena behind the chips, and you’ll see some green boxes. Attack them to get some much-needed health. It would be much easier if you upgrade your health bar before this fight.

In the third phase, she’ll threaten to shred the cards that the interns embody. Oh no. Before you carry on, equip the levitation ability as she will electrify the entire floor with defibrillators.

Float around on your levitational ball and keep rolling around to avoid incoming attacks like the card sweep. The electricity will fade in about 30 seconds to a minute. She’ll also switch the locations of her tentacle. Once the last two interns are saved with the bombs again, follow the same steps, and you’ve finished the fight.