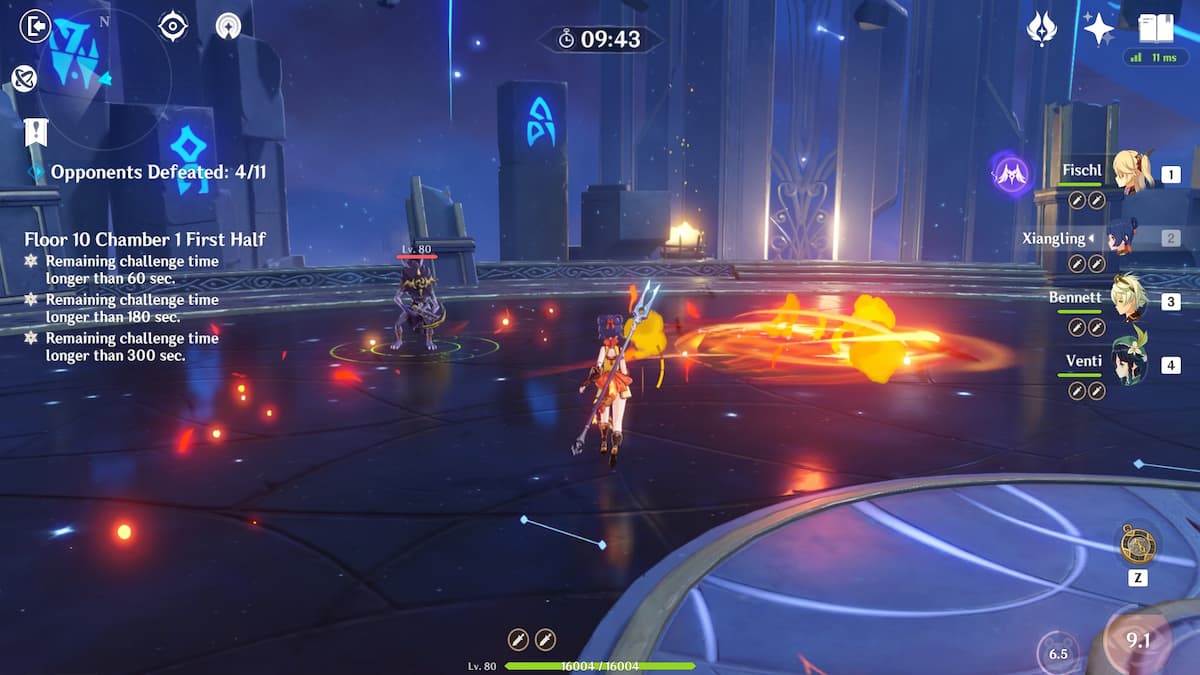 Once you complete Floor 9 of the Spiral Abyss, you can move onto Floor 10 to continue your journey on some of Genshin Impact’s hardest content. Like the last floor, Floor 10 has “three chambers,” each containing different fights. Defeat each chamber within a certain amount of time to get the maximum amount of stars, and maximize your rewards.

Just like Floor 9, Floor 10 has a “Leyline Disorder” to consider. For Version 2.1 on Floor 10, the “Leyline Disorder” grants buffs to the enemies through a Leader mechanic. One enemy is designated as the Leader, while all the other enemies are designated as an Attendant. Each Attendant alive gives the Leader buffs that stack; elemental and physical resistances. The Attendants also restore HP to the leader every 12 seconds. It’s important to kill the Attendants before focusing on the leader.

Floor 10 of the Spiral Abyss has lots of enemies that can be displaced by crowd control abilities. In general, your characters should be leveled up to at least level 70/80 with strong Artifacts. Consider these characters to take with you:

The most difficult part of this floor is likely the first half, in dealing with the Dendro Samachurl. The little green goblin will place vines all around you, dealing lots of damage and stopping your movement. The first wave of enemies are not so hard, but the second wave is when the Samachurl’s come in. Focus on the Hydro Samachurl’s first as they can heal the other enemies. Then, focus your energy on wiping out the rest of the enemies.

In the second half, if you brought Chongyun or Zhongli, the Stonehide Lawachurl’s Geo shield shouldn’t be a problem. The enemies on this floor aren’t so threatening, so long as you get rid of the shields. (Note: Do NOT put Zhongli on a permafreeze team — use one or the other. Zhongli’s Geo ability breaks the Freeze reaction, rendering the permafreeze useless.)

For both halves, having a character like Sucrose, Kazuha, or Venti helps tremendously. Grouping up the enemies and then unleashing lots of AoE damage helps you clear this floor quickly. If you don’t have two Anemo characters for both halves, consider slotting your Anemo character on your first team to deal with the first half. Having a permafreeze team for the second half is a fine way to kill the enemies quickly.

This is where your elemental reactions need to be on-point. These two enemies aren’t too hard once you know how to dodge their attack patterns and defeat the second phase. The Abyss Lector and Abyss Herald both have second phases once they reach a low HP threshold. Once they reach that threshold, they will not take any damage, and instead generate an Electro and Hydro shield respectively.

For the first half, you can actually safely whittle down the Abyss Lector’s shield with a character like Yoimiya, or even Amber. His abilities are easy to dodge from a distance, and both characters are capable of taking down his shield from afar. Otherwise, you can just spam elemental reactions and get his shield down. Beware, if you take hits from his attacks, your elemental burst gauge will drop, lowering your overall ability to take down his shield.

For the second half, a permafreeze team helps greatly. Once the Abyss Herald generates his Hydro shield, you can keep him permanently frozen. This is because he’s inflicted with Hydro the entire time. Not only will he be unable to attack, but his shield will take tons of damage from the Freeze reaction.

Once you obtain at least five stars from this chamber, proceed onto Floor 11 of the Spiral Abyss, which presents a new mechanic that tests your healing abilities.