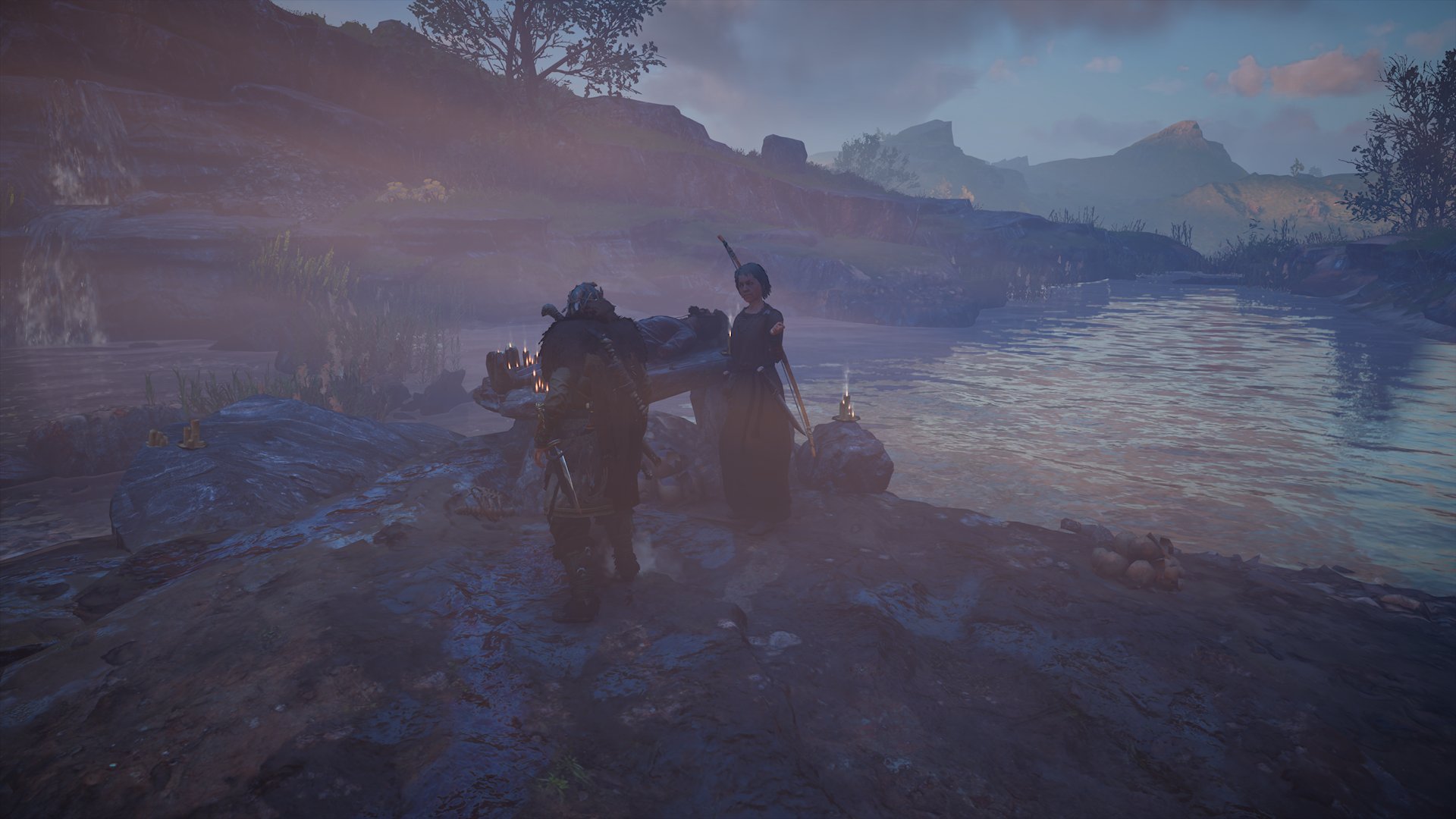 Counting Sheep is the longest quest in the Assassin’s Creed Odyssey crossover story in Assassin’s Creed Valhalla. You unlock it by completing Night and Day, which is the last time you’ll see Kassandra and Eivor working together until you finish this quest. This guide explains how to complete Counting Sheep, including all shard locations to help you get through it as fast as possible.

You’ll start the quest with an angry Eivor wanting to prove herself to Kassandra. She wants to find all five shards without Kassandra’s help or the hindrance of the mad warriors that follow her everywhere. The first shard location we went to was the closest, Hungladder. This location is at the top of the map.

Hungladder is a mining town that’s seen better days. The people there went mad and blew each other up with explosives before setting fire to what was left. First, you need to work your way through the town and kill all the enemies in your way. Then, look along the main path at the bottom of the village. You’ll see some stairs that go underground below some very creepy iconography. Follow the path and kill the enemy before picking up the first shard from the stone.

The second shard we found is in Inverarish on the right-hand side of the map. When you first visit the area, you’ll be directed into a location called brother’s cave. Inside you’ll find some snakes and a note indicating that the brothers have taken the shard to the nearest town, where they plan to sell it.

As you exit the cave, you can use Odin’s Sight to identify the brothers’ path to Inverarish. Follow the footsteps into the town and the houses the brothers visited. Inside, you’ll find yet another note explaining that the brothers had a falling out, and now one of them is running away with the shard.

Keep following the footsteps, and things take a turn for the worse. One brother killed the other and then themselves. You can find the shard up in the trees on a platform. You’ll need to fire an arrow at the dangling blocks to clear the path before you can reach it.

The third shard is at Fairy Pools at the bottom of the map. As you’d expect, you need to look behind the waterfall here to find a stone where the shard should be. Interact with it, then leave and head to the center of Fairy Pools.

There should be a woman on the rock in the middle of the area. Speak to her, and she’ll ask you very nicely to enter the water so that she can sacrifice you. However, you have a few options as to how you respond. You can buy the shard from her for 500 silver, antagonize her and attack her, or use your charisma points to convince her to hand over the shard as long as you have three points. We used charisma because the old woman had two nasty-looking wolves with her that we didn’t fancy fighting.

The fourth shard is in Dan Ardtreck, a location at the bottom of the tip on the left-hand side of the map. Finding this one is relatively simple. All you need to do is kill the mad warriors, then read any notes you can find. They should tell you to look towards the water for the shard. Using Odin’s Sight, you should be able to find the shard underwater just off the shore in the wreck of a boat.

The final shard is located at the top of the map in the tip on the right-hand side at a location called Excavation Site. It’s an area where you won’t immediately be in combat with the mad warriors, but you need to be cautious. There’s an entrance to an underground cave within one of the excavated structures. Head inside and kill the enemies there. Then, you need to blow up the destructible wall to reveal the fifth shard. There are some explosive pots on the road leading to the Excavation Site, but you can also use your explosive arrow ability.

The quest will end when you pick up the final shard. After that, you’re into the final stages of the crossover story.