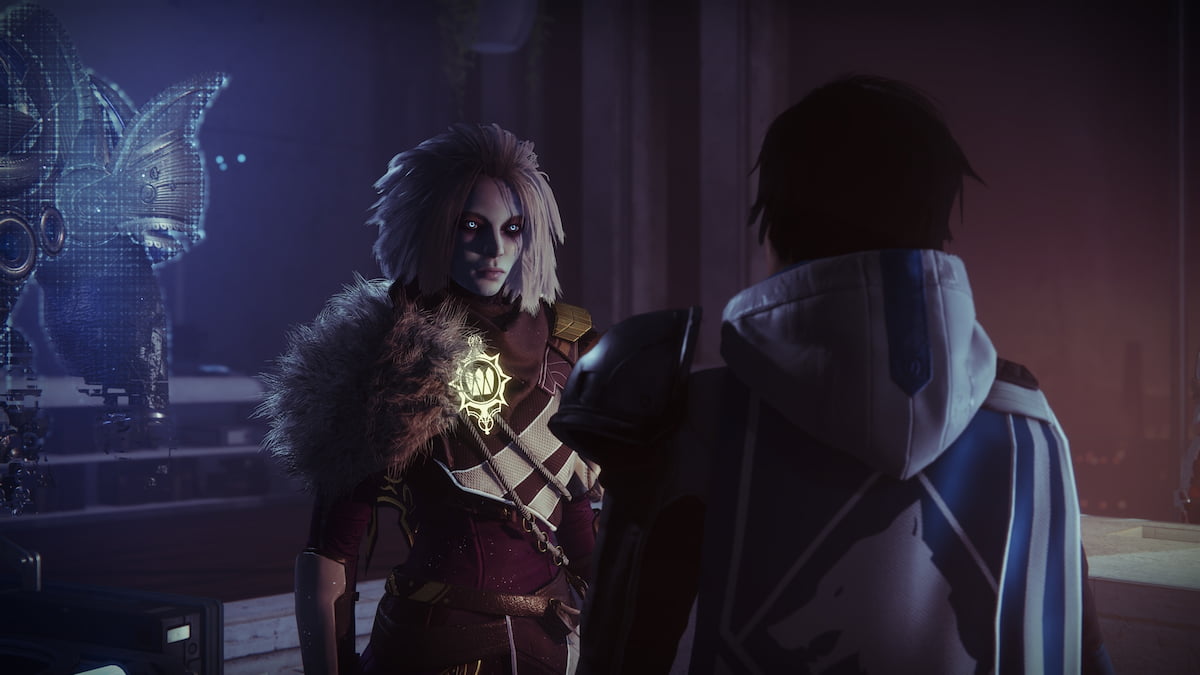 The Season of the Seraph has arrived in Destiny 2. You will be working alongside Ana, Clovis, and Osiris to protect the Warmind’s multiple uplinks from several forces as they attempt to control them, likely to tip the balance toward The Witness before they arrive. This season, you will be working on the More than a Weapon quest. Here’s what you need to know about how to complete the More than a Weapon quest in Destiny 2.

All More than Weapon quest steps in Destiny 2

You need to work through several steps to complete More than a Weapon. Many of these quest steps unlock on Tuesday, when Destiny 2 resets, so don’t expect to finish this quest when you grab it.

The first step of this quest will have you speaking with Mara Sov. You can find her next at the holoprojector with a message for you.

Once you’ve spoken with Mara, make your way to the Heist Battleground on the moon, and complete the mission. This will be one of the weekly activities you work through as you play Destiny 2 during the Season of the Seraph.

The next step, you’re going to need to acquire 500 Seraph Key Codes. These Key Codes come from the Heist Battleground quests you completed in the previous step. You acquired half as much as you needed. You’ll need to repeat the previous activity and prepare to protect another Warmind facility. However, if you’d prefer, you can complete other activities in Destiny 2, such as running Strikes, Crucible or Gambit matches, completing dailies, or other patrols in the game.

The next step is for you to unlock a Seraph Chest. You can do this by going to the H.E.L.M. and completing one of the Heist Battleground activities in the playlist on the right side of the screen. You need to make sure you work through this activity, or a Seraph Chest will not appear at the end.

Now that you’ve gone through that, you now work on Operation: Archimedes. This is where you have the option to go it alone or with a fireteam, and complete one of the larger facilities in the system. You must have completed the other steps to gain access to this mission, which is available on the H.E.L.M. menu.

It is now time to make your way back to Ana Bray at the H.E.L.M. and speak with her on a holoprojector for the next step.

After speaking with Ana at the holoprojector, turn around to speak with the Exo Frame and have a conversation with Clovis.

After speaking with Clovis and receiving your weekly rewards, turn back to interact with the hologram projector and listen to the message at the terminal.

These are the first steps for the first week’s quest in Season of the Seraph. Return next week to the next ones.

The next steps have arrived, and you can now make your way back to Clovis at the Exo Frame in the H.E.L.M.

This step is for you to speak directly with the Clovis Exo Frame, explaining what the next steps are going to be. You will have to make your way to the Heist Battleground on Mars.

The Heist Battleground on Mars is available on Savathun’s Throne World. Your character will need access to this location before they can join it.

After you’ve completed the Heist Battleground: Mars activity, it’s back to grinding Seraph Key Codes if you have not already. You will need 500 before you go forward with the next step.

With your 500 Seraph Key Codes, it’s time to dive into another Heist Battleground activity at the H.E.L.M. where you will need to open up a Seraph Chest at the end. We recommend making sure you use the mods to protect yourself and take on the various Champions that could appear during this activity.

Upon opening a Seraph Chest, the next step will have you working on Operation: Diocles. You can start this operation in the H.E.L.M. to the bottom right of the Heist Battleground playlist.

With Operation: Diocles wrapped up, return to the H.E.L.M. There is a holoprojector recording you need to hear to advance in this quest.

Now that you’ve spoken with Ana at the holoprojector, the next step is to return to the Exo Frame behind you and speak with Clovis.

It’s time to take a step away from this quest and for the rest of it to appear in Destiny 2’s next weekly reset.

It’s time to return to the H.E.L.M. and speak with Clovis to hear what you need to do next.

Before you can go forward, make sure to collect at least 500 Seraph Keys, and unlock the next step in the quest for you to access Seraph Chest during the Heist Battleground activity.

Now that you have the required keys, make your way to the Heist Battleground activity, and unlock the chest.

Upon completing this task and unlocking the Seraph Chest, return to the H.E.L.M. to interact with a holoprojector to receive the next step. When you complete this portion of the quest, you will earn the Revision Zero, and gain access to Operation: Seraph Shield.

It’s time to go through the fabled Operation: Seraph Shield quest. You should find it available on the H.E.L.M., next to the other Heist Battleground activity. It will be a lengthy quest with several puzzles, so be prepared to take your time going through it.

When you finish Operation: Seraph Shield, return to the H.E.L.M. to speak with the Exo Frame to unlock the ancient prototype weapon.

That was the final step for this week, and you will need to return for the next series of tasks for Destiny 2’s next reset.

With a new week comes new steps for the More Than a Weapon quest. Start by heading to the H.E.L.M. and speaking with Clovis at the Exo Frame.

If you don’t have 500 Seraph Key Codes, make sure to go out and grab some by completing activities throughout the system, with Strikes, Gambit, and Crucible matches being your best options.

It’s back to Heist Battlegrounds with you. Complete any one activity from the Heist playlist node in the H.E.L.M. and spend your Key Codes at the Seraph chest.

Head back to the H.E.L.M. and speak with Ana via the Holoprojector across from the Exo Frame. She has a juicy plan she’d like your help with.

There’s now a new node on the Cosmodrome called Operation: Son of Saturn, which has you defeating Fallen on the Vostok Crucible map that also plays host to the Iron Lords’ Iron Temple. Once they’re defeated, relight the torches at the three Control points, then head across the bridge to the Iron Temple itself. There will be one more torch and several investigation points around the area. The final one will be on the east side at a dead and broken Ghost. Rasputin himself will contact you, and you’ll be able to enjoy a new cutscene.

Head back to the H.E.L.M. and speak with Clovis one more time. Suffice it to say his time as an “ally” is over.

Ana will need a moment, but Rasputin also knows she needs someone to talk to, so head to the Holoprojector to talk her down a bit.

Head back to the Exo Frame, newly inhabited by everyone’s favorite Warmind, and debrief with Rasputin. He’ll tell you to continue as you have been doing while he considers the next steps.

That’s all for Week 4 of the More Than a Weapon questline. Come back next week for more.

Following the events of Clovis being pushed out of the Exo Frame, and Rasputin taking over, it’s time to return to your work with Osiris and Ana. You will need to start this week by speaking with Rasputin at the H.E.L.M.

After you speak with Rasputin at the H.E.L.M., make your way to the Holoprojector and talk with Osiris.

The next step after speaking with Osiris will have you completing the weekly Heist Battlegrounds mission where you can unlock a Seraph Chest, but before you can do that, for this step, earn at least 500 Seraph Key Codes.

When you have at least 500 Seraph Key Codes, you can start the weekly Heist Battlegrounds mission, and you can unlock the Seraph Chest when you reach the end.

Once you’ve completed the Heist Battleground mission, and opened a Seraph Chest, make your way back to the H.E.L.M. to speak with Elsie Bray at the Holoprojector.

After you’ve had your conversation with Ana, return to Rasputin and speak with it at the Exo Frame.

You will need to return next week to continue through the rest of the steps.

It’s time to return to Rasputin and figure out your next move. Make your way over to the H.E.L.M. and speak with the Exo Frame.

Before you can proceed, make sure to have at least 500 Seraph Key Codes in your inventory. This is required to make it to the next step.

Now, complete one of the Heist Battleground weekly missions, and you must reach the end with your fireteam. When you reach the end, there is a Seraph Chest you can unlock using the Key Codes you’ve acquired.

After unlocking the Seraph Chest, it’s time to make your way back to the H.E.L.M. to speak with the Exo Frame. However, Mara Sov and Osiris are already there, discussing how it looks like the Hive forces are attempting to bring about a ritual. They depart to advise their respective parties about what to do next following this revelation.

Once you’ve listened to the conversation between Mara Sov and Osiris, make your way to Zavala’s office for an emergency meeting. You can find it in the Tower. There, a cutscene plays out with a Vanguard meeting about what to do with Rasputin and the Warmind.

Following the conclusion of the meeting, your Guardian will return to the H.E.L.M. where you need to share what happened with Rasputin, and exchange how to best move forward.

After speaking with Rasputin, you will need to return next week to figure out what to do next with the Vanguard.

Return to the H.E.L.M to speak with the Exo Frame once again for the final week of quests.

Turn around to the Holoproject to speak with Ana, after you’ve spoken with the Exo Frame.

You must obtain at least 500 Seraph Key Codes to complete the quest. If you already have them in your inventory, you can skip this step.

With the Seraph Chest looted, it’s time to embark on the next mission, Operation Sancus. You can find it in the Cosmodrome, on the right side of the map.

The last thing to do for the More than a Weapon quest is to return to the H.E.L.M and give Rasputin the encrypted files he had you obtain from the Cosmodrome. He’ll begin to work on them, and they should be safe in the Vanguard’s possession.