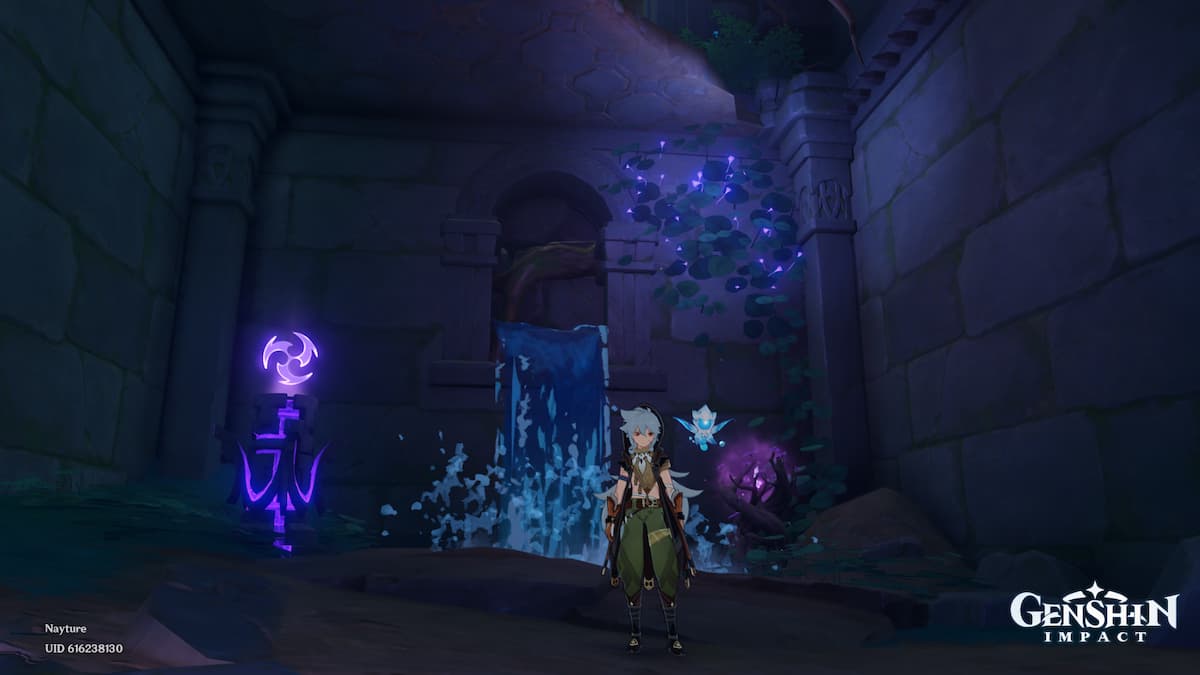 With Orobashi’s Legacy Prologue and Part 1 done, we must now move onward to Part 2. Part 2 is very similar to Part 1, with the primary difference being a change in location. This Ward for Part 2 can be found close to the Serpent’s Head, just to the south of the Momiji-Dyed Court Domain. Once here, you must observe the Ward, just like in Part 1. You will find that this Ward is also in disrepair, and will require a “Serpent’s Head: Rock Pillar Warding Stone” and a “Serpent’s Head: Rock Pillar Pearl”.

The catch here is that these two objects are hidden in different places this time. As such, we will first look for the “Serpent’s Head: Rock Pillar Warding Stone”, which is not inside of a Sacred Stone Puzzle, but rather it is hiding in a nearby ruin. This ruin is almost immediately to the left of the Ward location (if you are facing the Ward). It is a rectangular hole with a Thunder Sakura Bough next to it.

Collect an Electrograna from the Thunder Sakura Bough, and then glide down the hole. This Electrograna will deactivate an Electro-Barrier that would otherwise block your path. Then activate the mechanism nearby to lower the water level in the ruin.

With the water level lowered, prepare to fight. You must defeat three Ruin Destroyers, then solve the Electro Cube Puzzle (which will almost certainly be disturbed during combat, meaning you’re on your own for this one). This will open the hatch near the staircase, where you must go next.

Once you go down the hatch, beat up the Hydro Slimes that appear and then claim your prize (the “Serpent’s Head: Rock Pillar Warding Stone”) at the base of the small waterfall.

Now, we can go and get that “Serpent’s Head: Rock Pillar Pearl”. It is located in the middle of the triangular body of water directly to the west of the Ward. Once there, find the Sacred Stone Mound at the top of the hill and aim it toward the west, and have it angled at the middle elevation.

Now climb/glide/use the Thunder Spheres to get to the Mirror you just struck, and rotate it to face west and be level with the horizon. This will guide the Electro shot across the water again to the higher of the two Thunderbearer mirrors that are opposite the waterfall.

Once here, aim the higher Thunderbearer Mirror downward and to the east, so that it is targeting the mirror directly below it.

Then go to the Thunderbearer Mirror near the overhang, and turn it north and even with the horizon, so that it fires across the water at the only mirror we haven’t interacted with yet.

Now finally we can finally rotate this last mirror to face west, and be at middle elevation. This should make it target the barrier at the center of the puzzle, thus marking the end of our mirror rotations, for now.

Lastly, strike the Sacred Stone Mound and watch the cutscene with the Electro shot bouncing around and striking the barrier, freeing the pearl. Go and claim the pearl and submit the two items you have acquired to the Ward, thus completing Orobashi’s Legacy Part 2.