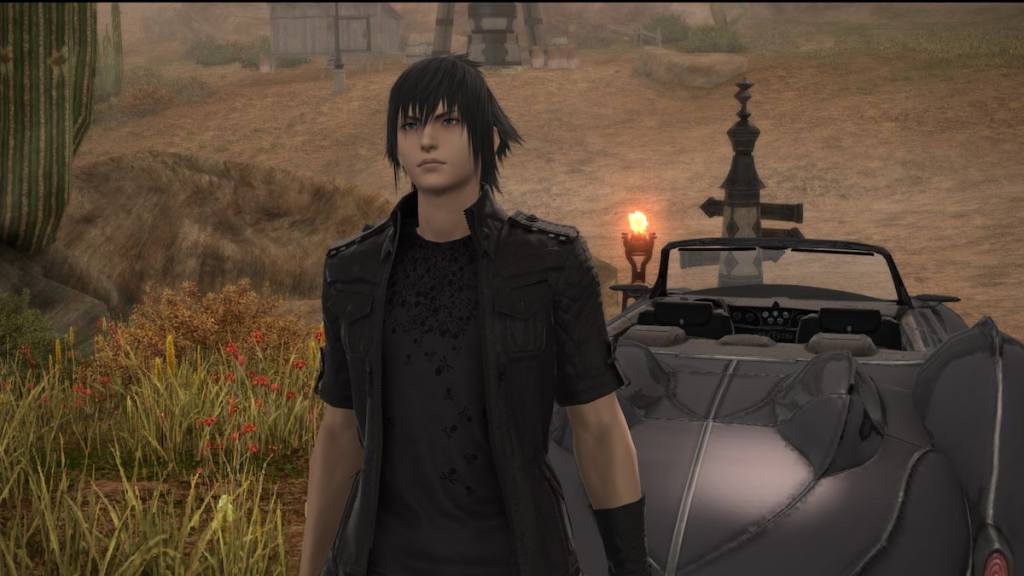 For those interested in completing A Nocture for Heroes in Final Fantasy XIV Online, the event returns in 2021, where you’ll receive a quest called The Man in Black. It’ll be the first quest of several where you’ll be able to earn the entire outfit called the Lucian Prince’s outfit, featured in Final Fantasy XV, worn by the primary character. You’ll start this event by speaking with Kipih in Ul’dah, Steps of Nald.

When you meet up with Kipih, they’re going to ask you if you know anything about a black vehicle spotted in Thanalan, alongside mechanical soldiers, informing you that many believe this to be a new type of upcoming weapon. You’ll have to investigate the sighting in Central Thanalan, at the Royal Allagan Starway south of the Black Brush Station. You should be able to teleport to Black Brush Station and head right over. When you arrive, look for a sparkling ‘destination’ icon on the ground, and interact with it to continue the event.

A cutscene will play out where your character encounters a Man in Black looking for a garage for his vehicle. The young man will ask about a garage, and you can suggest having someone at Iron Works or Cid look at it for him. You also offer to help him move his car in that direction, where he reveals his name to Noctis.

Upon reaching Iron Works, Cid will arrive, keen on investigating the vehicle. Cid, and the other workers, won’t have any idea about the vehicle, and Noctis seems pretty confused about where he is right now. During the conversation, Cid mentions the mechanical soldiers spotted nearby, and Noctis offers to go and investigate them with you. You’ll teleport back to Black Brush Station, and then you’ll want to go to the east to find Noctis.

When you arrive at the location, you will need to wait for the fate to arrive called Like Clockwork. Shortly after that. You need to make sure to level sync with it to participate in the event. Once finished, return to the northwest, to a new destination. You’ll need to look for a small ‘destination’ icon on the ground again.

After interacting with the highlight, another cutscene will play out with Noctis. Then, when Noctis asks what to do next to get back, you can choose to talk with Cid or Kipih. You’ll have to go and speak with the chosen party after the conversation is finished, and they shouldn’t be too far away at Black Brush Station. When you’re finished, the next step is to return to Kipih in Ul’Dah and complete the quest. You’ll receive the Lucian Prince’s Fingerless gloves as a reward, and you’ll unlock the next quest, In the Dark of Night.