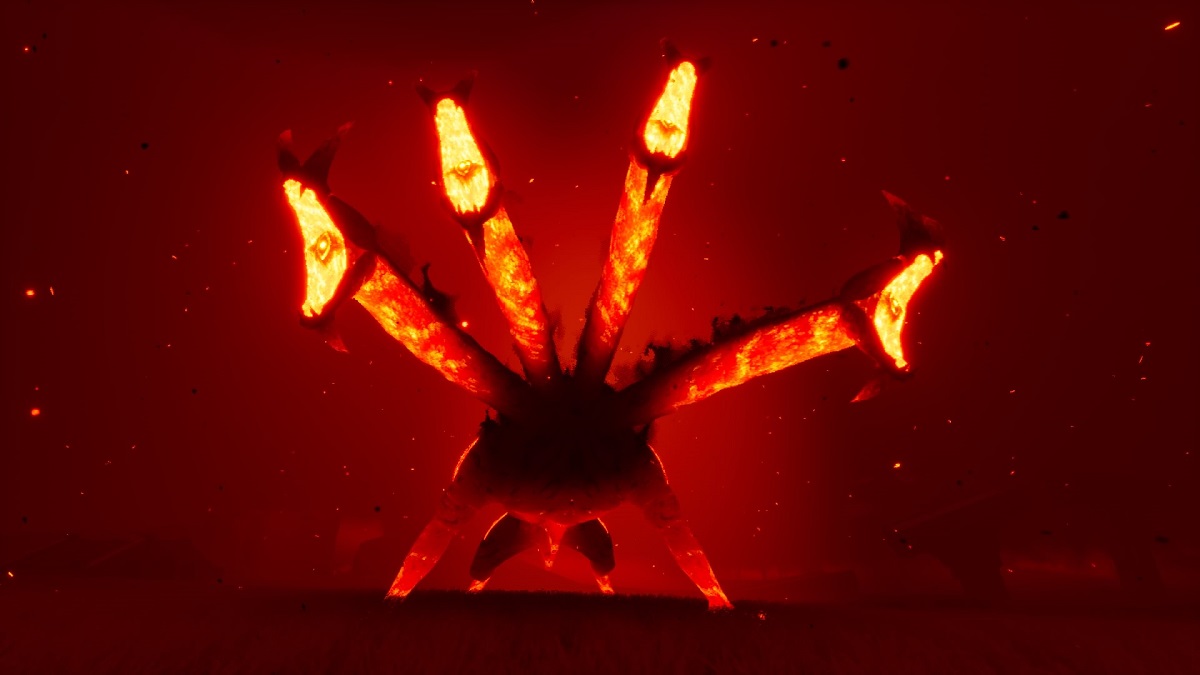 Nimue is arguably the toughest boss battle in The Pathless. This hydra-based monster can be beaten, though, as long as you pay attention to its attack patterns and don’t get frustrated if you get beaten back a few times.

To initiate the fight, you need to light the three obelisks on the Great Plain. You must acquire six snake tokens — two for each obelisk — to light them. These are scattered across this region, but you can use your spirit mask to help you find them. Once the beacons are lit, you can confront Nimue.

The first phase is a chase sequence. Nimue will go runoff, so dash after her. Use the talisman targets to refill your dash meter as you go. After you catch up with her, start destroying the targets on her leg., You should break two before Nimue runs faster. Continue to chase her, and make sure you avoid any fire-based attacks she throws at you. Once you reach her again, shoot the other two leg targets. Use your falcon’s special ability to deal significant damage and move the fight on.

Nimue will retreat to a coliseum and take up residence in a lava pit. Each of Nimue’s four heads will now attack you in turn. Their attacks are random, so it can be difficult to predict which one to deal with. Her heads can sweep across the floor to knock you over, lunge to bite you, spit fireballs, or throw volcanic rocks into the air that can land on you. Her fire-based attacks are easy to evade, but the sweep and lunge moves only give you a second to react. Stay focused and use your jump, glide, and dash abilities to outmaneuver each attack.

After a head has attacked, you will have a two-second window to lock on and fire an arrow. If you hit the target in its mouth, the head will burst. Repeat this pattern until only one head remains. However, be aware that Nimue’s heads can regenerate if you don’t dispatch the others quickly enough. The final head will perform a lunge move, so dive out of the way. Shoot an arrow at the last target, and Nimue will fall backwards.

Your falcon buddy will circle the pit to see if Nimue has been beaten, but it will get caught in a lava globule. Nimue will return with seven heads now. It has the same attacks as phase two, plus an additional lazer-focused lava attack. Dash in one direction and shoot the talisman targets to evade this move. Avoid Nimue’s other attacks as before as well, and destroy four of its seven heads to have a chance to rescue your falcon.

When Nimue retreats, shoot the targets on either side of the lava globule. You should have enough time to hit both but, if not, repeat the steps above until you get another opportunity. Once both lava targets are down, your falcon will be released and spin-off to the opposite side of the coliseum. Nimue will return and will only use her lava lazer attack from now on.

For the final phase, you need to reunite with your falcon. Use the jagged rocks as cover from Nimue’s attack, and platform your way to your falcon. Use the talisman targets to dash across areas of lava when Nimue isn’t attacking. Once you reunite with your falcon, you will unleash a light attack on Nimue to defeat it for good. Watch the resultant cutscene to cleanse her, and you will get the Cadence of Nimue as a reward. This gifts you an extra falcon flap, and flaps will now recharge faster after you land from a glide.