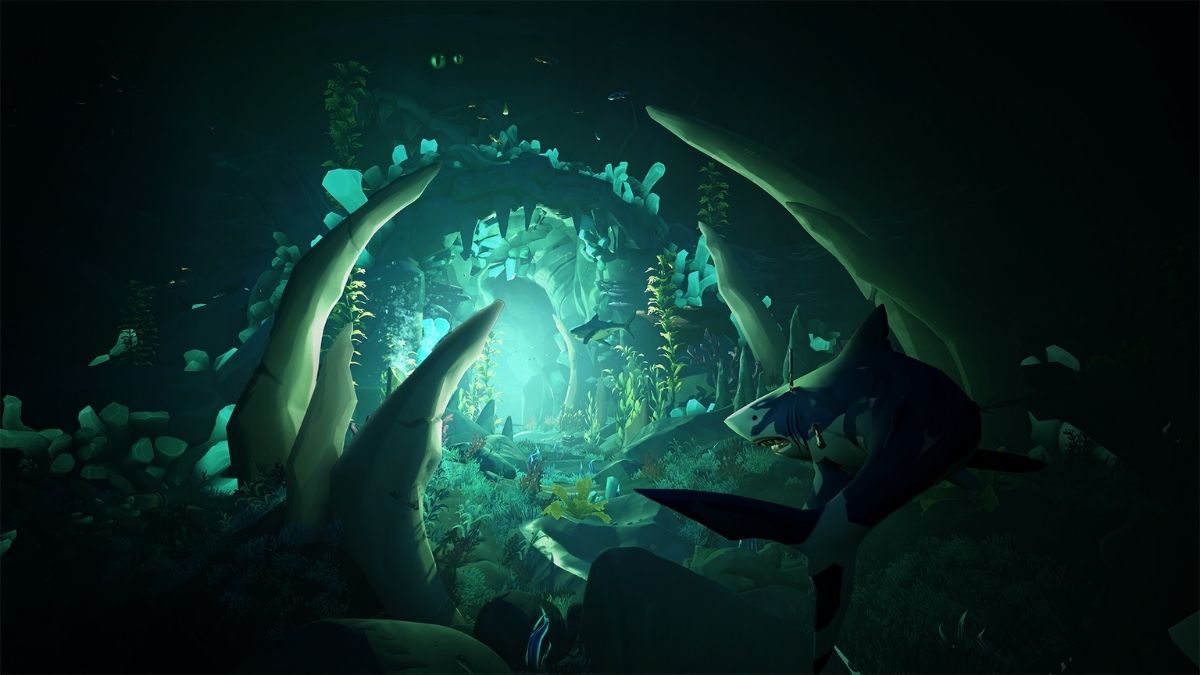 The best part of Sea of Thieves’ Season Four content has undoubtedly been the Six Shrines of the Sunken Kingdom, which see pirate crews exploring beneath the waves to find journals and treasure if they’re quick and skilled enough to solve the riddles within.

Where is the Shrine of Tribute?

The Shrine of Tribute is located in The Ancient Isles. From Plunder Outpost, head west to coordinates G18. As you approach, there will be blue and purple lights in the sky. Drop anchor in the lights and get ready for a swim.

How to enter the shrine

Once in the water, you’ll spot the shrine as you swim down. Head to the east side of the shrine. The entrance will be at the bottom. There will be a stone-circled staircase surrounded by blue glowing coral. The staircase will lead you to a door. It’s locked, but there is a lever inside the staircase that will open the door and allow you to enter the Shrine of Tribute.

Swim through the now opened tunnel and then head straight down. You’ll enter a large room. On the east side of the room, there is a Siren Statue puzzle, just below the Sunken Merfolk statue, which you should use to store treasure as you collect it treasure as you find it rather than travel back and forth to your ship.

Take a look at the Siren Statue mural. There are three different positions for the arms:

Before you leave this room, be sure to check the journal sitting on top of the collapsed wall. Once you’ve read it, head south and swim through the tunnel. You’ll pass through several rooms until you come to a room with lots of that same bright blue coral you saw at the entrance. The second journal entry is at the base of the Undersea Vent.

Once you have this journal, continue down the path (you’ll start turning to go north eventually) until you reach a fork in the road. Take the left path (heading west) until you reach the first Siren Statue. You’ll spot that it is carrying a gem, so you’ll want to hit it until its arm is lifted up.

Once that is done, you can head back to the first path you were on and continue going north. You’ll find the Siren Statue with the conch shell but we don’t need it right now. Go down the eastern path. You’ll find a room with a lot of red coral. Look to your right and you’ll spot a stone lip with the third journal on it.

Head back to the conch shell Siren Statue and take the south exit into a large chamber with a stone statue on a throne. Behind it will be a crack in the wall with lots of bright red coral around it. Enter the crack until you find the stairs. Head up until you reach the air pocket. There is a Siren Statue with coral in its hand. Whack it until it is in the middle position.

Go back to the room with the statue on the throne. Go up the stairs on the side of the chamber — you’ll find the last Siren Statue. Hit it until it is in the low position.

Go back to the Siren Statue with the conch shell and hit it. The water level will rise and you can access the higher levels of the room with the throne statue.

Head up to the top of the chamber with the throne statue. Head west and find the room with treasure, and remember to visit the Merfolk Statue if you need it. Have a look at the floor. The raised portion will soon become important.

Go south and get ready to do some platforming. Jump along the upper path toward the south side of the room. As you move along, you’ll spot another raised floor section.

On the other side of the statue, you’ll see a mass of coral in front of you. On top of it is the fourth journal of the Shrine of Tribute. Directly beside the journal, you’ll find the final raised bit of floor. On the far south side of the room, there will be more treasure to grab.

Now that you’ve got a feel for the path, you want to run along and press those raised floor tiles quickly. Once they’re all down, the statue seated on the stone throne will move. The good news is that this will reveal the next area to explore. The bad news is that a bunch of Sirens will need to be dispatched before you can move on.

Go into the room opened up by the moved statue. You’ll find even more treasure in there as well as the last journal entry. Though you’ve completed the Shrine of Tribute, be sure to collect all the treasure you can carry, and make good use of the Merfolk statue near the entrance.