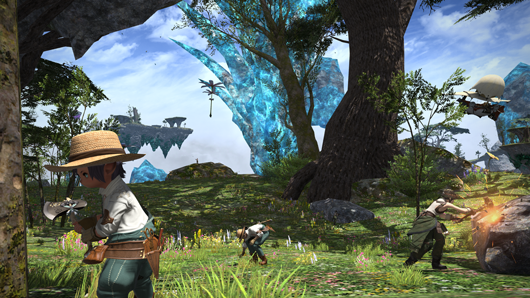 FATEs or Full Active Time Events are great for earning seals, gil, experience, and other goodies. They are typically combat scenarios where players will need to fight bosses or complete escort missions. FATEs are often used by players to grind experience, so it is easy to find groups of players waiting for extra members to jump in and complete the mission.

Unfortunately, these grinding groups become rarer as you level up. If you start at a lower level, around 49 and under, you can farm FATEs in Horizon, Dragonhead, or Quarrymill to gain a lot of quick XP and Seals with other players. You can also make a few friends while you are at it.

Joining a party when completing a FATE will give a lot more rewards than trying to do one solo. At the more popular farming locations, you can just shout that you are looking for a group, and someone is bound to ask you to join theirs.

If you don’t like playing with a party, Hunting Logs are one of the best ways to earn Seals while playing solo. Hunting Logs are very straight forward missions. Kill a specific number of certain creatures, get rewarded. Grand Companies have hunting logs that reward large amounts of Company Seals as you complete each entry. There are three ranks of Hunting Logs for the Grand Companies. If you complete every log, you will end up with a grand total of 20,775 seals.

Many of the Hunting Logs for the Grand Companies will require you to go to a dungeon to hunt the creatures you need. This will let you earn some loot from the dungeon that you can exchange for seals later.

Dungeon’s typically drop a lot of gear that can be used for getting Seals. Gear can be donated to the company by talking to the Personnel Officer. Please note that you can only earn seals this way if you have reached the rank of Sergeant Second Class or higher in your company. Don’t be afraid to be greedy when doing a dungeon run.

Simply choose some dungeons at or near your current level and keep running them to gain plenty of loot. Whatever you don’t need can be turned in for seals that you can use to purchase Grand Company items. We love this method because not only can you gain a lot of seals, but it is also possible to get some decent gear out of the dungeons. Seals are awarded at roughly 12x the level of the item you are donating. Once you reach around level 45, you can easily get a ton of seals from a single run.

Retainer’s are your best friend when it comes to gaining Seals. Once your retainer reaches level 10, you can assign them to do a Quick Exploration. These quick explorations take about an hour to complete, and your retainer will bring back a lot of gear that you can donate to the Personnel Officer. Once you give your Retainer’s some decent gear they will be able to bring back more loot and start paying for themselves on each quick trip.