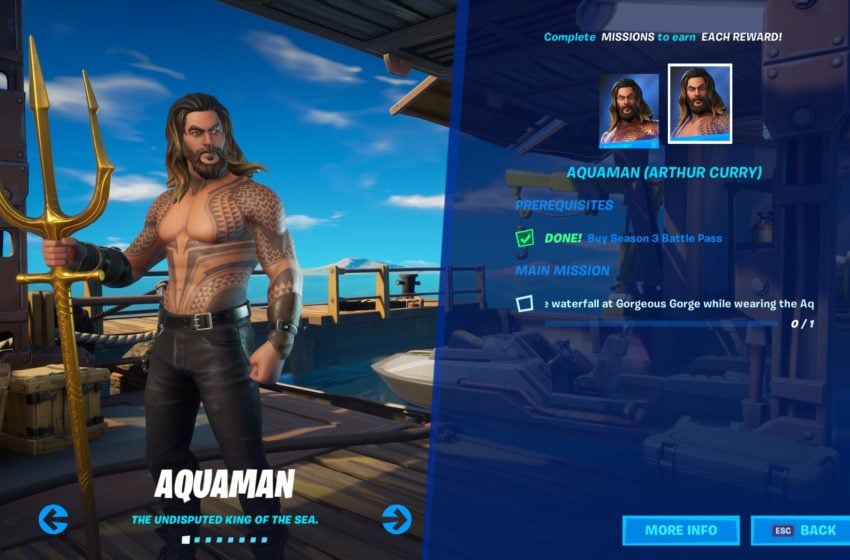 The Fortnite Season 3 battle pass has a new heroic guest appearance, where players can assume the role of the Justice League’s own Aquaman. He’s a perfect fit for players who now have to contend with a mostly submerged map, and there are two versions of him. Both versions bear a strong resemblance to Jason Momoa, the actor currently portraying the DC hero on screen. The first skin features Aquaman in his heroic orange and green outfit, whereas the Arthur Curry version features a shirtless, tattooed Aquaman in a more casual outfit.

You won’t be able to obtain either of these skins until you purchase the Season 3 battle pass. You can do so from the main Fortnite skin when you first launch the game. It will cost you 1,000 V-bucks to grab, which equates to $9.99 USD. After you have purchased the battle pass, you gain access to the skins, but you still need to complete challenges that will become available throughout Season 3 to unlock them.

How to get the Aquaman skin

The first of the two skins you can unlock is the heroic Aquaman skin, which is his iconic orange and green outfit. It may look similar to the classic animated get-up, but it looks more like a layer of scale armor than it does skin and tights. You will need to unlock this outfit before going after the next one, and there are five Aquaman-themed challenges you need to complete.

Each Aquaman challenge unlocks every week following the Season 3 release. We won’t see the last challenge until we’re a month into Season 3, but these tasks do not have a time limit. You have until the end of Season 3 to finish them.

How to unlock the Aquaman (Arthur Curry) skin

The second of the two skins will only unlock after you have received the first one. After all of the challenges are released and completed and you earn the first Aquaman skin, you need to be wearing it and dive over the waterfall at Gorgeous Gorge. You can find Gorgeous Gorge southeast of the center of the map.

You can choose to complete the challenge by making it your priority in a match, or casually doing it when you find the time. Regardless, if you do it while wearing the Aquaman skin, you can unlock the Arthur Curry version and freely wear whichever as you wish.