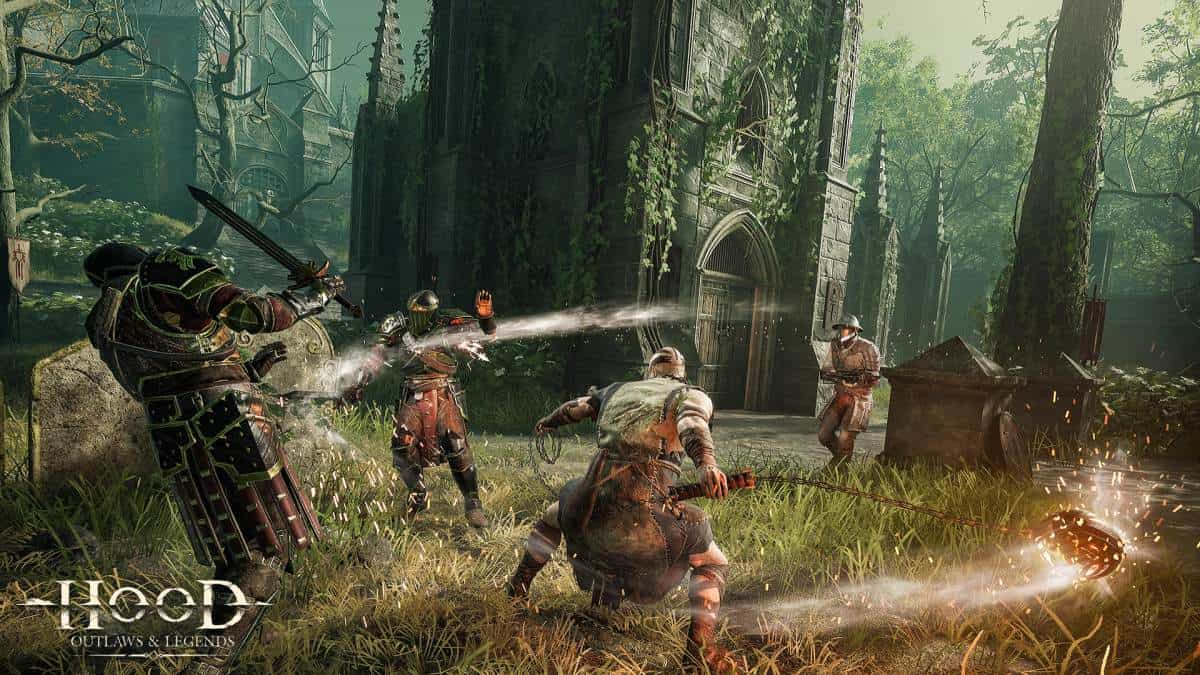 Tooke is the default support character in Hood: Outlaws & Legends, but he is not here to heal and uplift his allies. Wielding a heavy incense burner as a deadly bludgeon, this excommunicated holy man does the lord’s work by driving enemies out of hiding and into early graves, and parting the State from their ill-gotten riches. This guide goes over everything you need to know about playing Tooke in Hood: Outlaws & Legends.

Tooke’s weapon of choice is a status symbol from his past life as an Inquisitor-in-training for the State. The censer has a long chain and is the perfect weapon for fighting ranged characters and controlling team fights. Tooke’s light attack has a wide area of effect, and while it deals less damage than John’s hammer, it can effectively disrupt groups of enemies and leave them open for Tooke’s allies to finish off. Chaining multiple hits on the same enemy inflicts higher damage with each consecutive hit.

The heavy attack has a decent range and can be used to stumble players, letting you close in on them. It also forces blocking enemies to momentarily drop their guard on hit, though the attack’s recovery animation is too long for Tooke to be able to follow up effectively. Tooke’s melee attacks work best when his teammates are around to take advantage of the crowd control he sets up.

Tooke’s leap attack is an overhead swing that has less range than his regular heavy. To make sure you land Tooke’s heavy attack and leap attack, lock onto your target with the appropriate key or button.

Tooke’s unique throwable in Hood: Outlaws & Legends is the poison flask. It produces a large cloud of translucent smoke which temporarily impairs the vision of anyone caught in it; this effect remains active for a couple of seconds after leaving the area of effect. The gas also rapidly drains the stamina of all players standing inside the cloud. Both effects apply against all players, friends, or foes. Naturally, Tooke’s poison is an incredible denial tool at the winch. The gas also disables State guards, similar to Marianne’s smoke; this remains true even if Tooke takes the Medicinal Potion perk.

Tooke has possibly the best set of abilities of any character in Hood: Outlaws & Legends. He passively regenerates stamina faster than other outlaws and can thus chase longer, fight better, and winch more. As long as you manage your stamina properly and don’t let it run out, you can become an unmovable obstacle to the enemy team, either picking them apart by yourself or locking them down in protracted fights to give your allies more time.

Tooke’s active ability, Instinct, is also great. On activation, it instantly heals a large amount of health for you and nearby teammates. It’s usually best to hold off on using this ability until you can heal at least one other player with it. The ability has a short activation animation that gives nearby enemies just enough time to line up a headshot or get in a hit and potentially stun-lock you. This is all the more reason not to use Instinct when fighting alone.

Instinct also reveals enemies in a small radius around you for a duration, highlighting them even if they are hiding in bushes or behind walls. Enemies can avoid detection by crouching, though you can take this away by picking the Innate Insight perk.

Like every Hood: Outlaws & Legends character, Tooke can take a couple of different perk combinations to focus his gameplay on a particular role.

It’s important to note that while certain perks give Tooke new strengths, they also limit his effectiveness in other areas. For example, including the Medicinal Potion perk in your build will prevent you from suffocating enemy players and keeping them off the winch. Similarly, taking the Pastoral Aid perk lets you winch even faster when expending stamina, but makes you capture spawn points slower. When taking a specialized combination of perks, make sure not to distract yourself from your intended playstyle, unless you want to throw away any advantage your chosen perks would normally give you.

While Tooke is designed as a supporting character in Hood: Outlaws & Legends, he is flexible and powerful enough to do everything on his own. With his abilities, he can stay on the move, control objectives, clear guards, and lock down enemy players. He moves swiftly, fights viciously, and can even open locked doors noiselessly. Tooke can also carry and extract the chest faster, making him a serviceable alternative to John. There is simply nothing this itinerant monk is bad at.

Whether alone or with his team, Tooke’s favorite place to be is at the center of big brawls, where his censer can stagger multiple enemies at a time and force them to scatter. He shines in the late game, when team fights break out constantly.