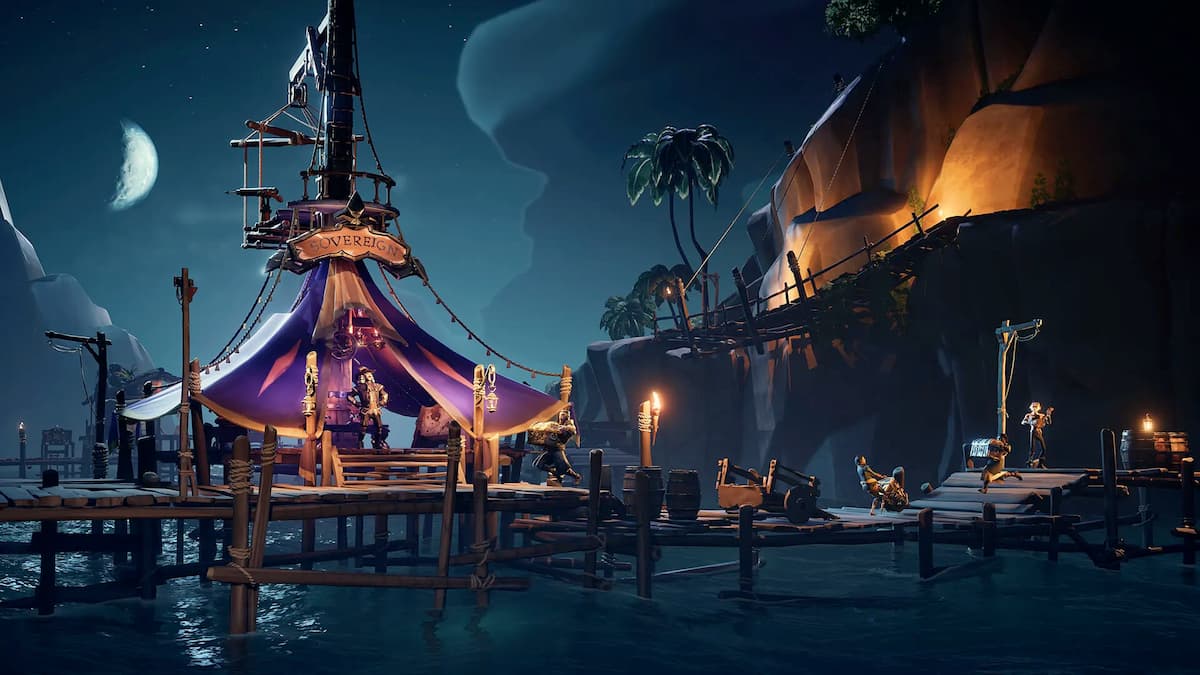 Cashing in your loot in Sea of Thieves can require a lot of footwork, usually requiring you to carry each piece of treasure by itself to the appropriate merchants on an Outpost. Luckily, the Sovereigns are a Trading Company that can completely expedite the process for Captained crews. You can turn in almost any of your loot to the Sovereigns, and you’ll make the same amount of Gold or Doubloons as usual. Here’s how Captains can take advantage of the Sovereigns in Sea of Thieves.

Where are the Sovereigns in Sea of Thieves?

There is a separate dock for the Sovereigns at each of the seven Outposts in Sea of Thieves, distant from where your ship spawns. You may have noticed that these docks were before Season 7, but now they are decored with a fancy purple tent — you can’t miss it. For reference, here is approximately where each Sovereign tent is at each Outpost, using the Tavern as a starting point:

Why should you turn in to the Sovereigns?

Keep in mind that you can only make use of the Sovereigns’ services if you are the Captain of your ship, or are in a Captained crew. Call the Sovereigns classy or snooty, but that’s how it is. You also cannot sell treasure for Reaper’s Bones or Hunter’s Call. That said, turning in loot at the Sovereigns is a much faster process and will save you time for more adventuring afterward.

How to turn in loot efficiently to the Sovereigns

Not only can you turn in all of your loot to the Sovereigns, but their dock and tent have helpful features that speed up the selling process even more. With an elevator and a harpoon, you can put all of your treasure in one big pile.

First, walk to the mast of the Sovereigns’ tent; climb the ladder on it. You’ll reach a platform with harpoons and an elevator; behind you on the mast is a lever that will lower the elevator, but don’t pull it just yet.

Assuming your ship is parked at the Sovereigns dock, you can then harpoon treasure off your ship and place it on the elevator. Once all of your treasure is in one big pile, pull the lever to lower the elevator and climb down to the bottom of the tent.

Now you can turn in all of your fine treasures to the fancy Sovereigns NPC without taking too many steps. There’s also a lever on the back of the bottom of the mast that you can use to lower or raise the elevator.

Are the Sovereigns at The Reaper’s Hideout?