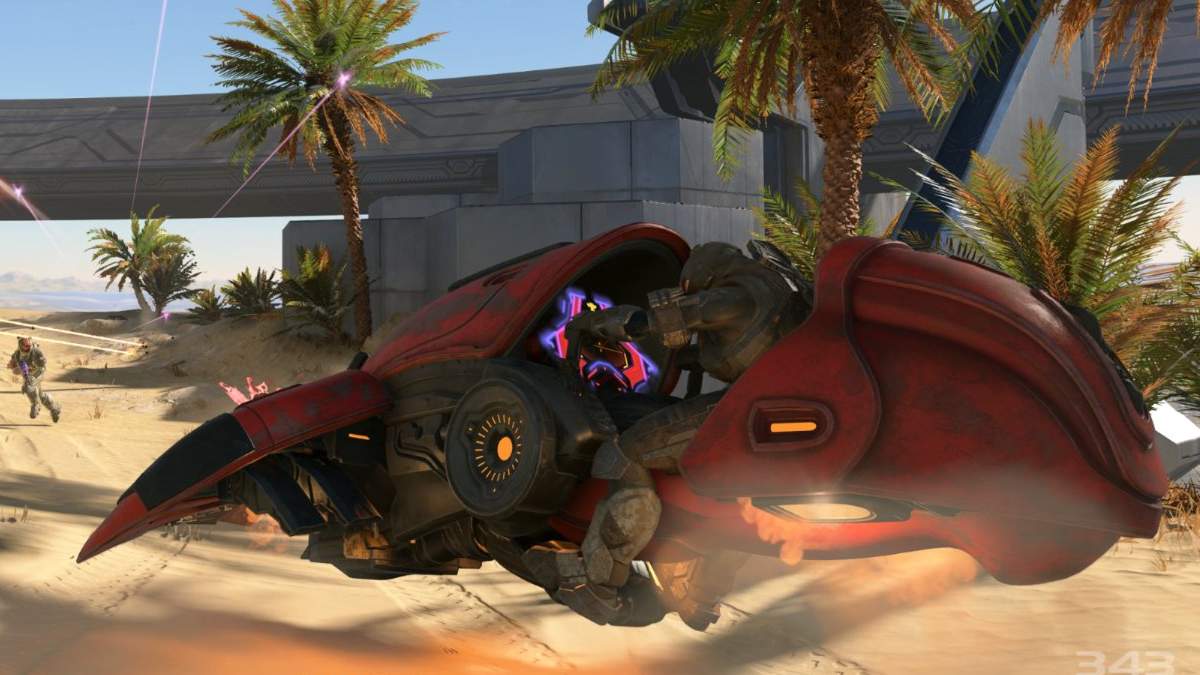 Ghosts have been a mainstay in Halo titles dating back to Halo: Combat Evolved. In Halo Infinite, the alien hovercraft returns with a Banished coating similar to what it had in Halo Wars 2. Unlike the iconic purple sheen synonymous with Covenant Ghosts, Banished Ghosts are bright red and a bit more tarnished. In this guide, you’ll learn how best to use these speedy death machines to rack up kills in Halo Infinite.

To drive a Ghost, you need to walk over to the driver’s seat, wait for the Drive Ghost prompt to appear, and hold X to drive. Once inside, use the Left Thumbstick to move around and the Right Thumbstick to adjust the camera. Unlike UNSC land vehicles, the Ghost will hover over the ground as you drive it thanks to its anti-gravity systems. Combine that with its speed, maneuverability, and small size, and you’ve got a vehicle that’s perfect for reconnaissance and hit-and-run tactics.

Related: How to use the Brute Chopper in Halo Infinite

Though the Ghost easily glides across surfaces on its own, players can hold Left Trigger (LT) to activate a boost. The Banished Wraith and Chopper also have a boost feature, but the Ghost’s is unlimited. You’ll know you’re boosting when red-orange streaks of light are coming off both wings of the Ghost. Use the boost to traverse long distances at rapid speed. You can even ramp off of hills and objects to get some major air, but make sure you don’t accidentally flip it.

The Ghost has a set of rapid-fire plasma cannons mounted on its wings, allowing you to hold Right Trigger (RT) to fire. There’s no overheat, but the plasma rounds travel relatively slowly, meaning you’ll have to get close to nail a lot of your shots. The rounds are also not very powerful, so we wouldn’t recommend using it for anti-vehicle endeavors unless you’re peppering from afar. That said, the guns are good for taking a Spartan’s shields down and killing them somewhat quickly if you can nail all of your shots.

While the Ghost’s boost is often used for fast transit, it can also be used to splatter opponents in combat. The Ghost isn’t heavy enough to splatter an enemy the normal way, so the boost is necessary. Line up your target, time your attack, and boost away. Many players are likely to jump out of your way, as the boost takes a couple of seconds to reach full speed. Try faking out opponents or using stealth to get the drop on them.

A major downside to the Ghost’s combat capabilities is that it’s relatively weak. You get the most protection from the armored front, which is still pretty soft. And even then, you’re wide open from the sides (like the Chopper). To maximize your time in a Ghost, use it for what it was made for in the lore: reconnaissance, travel, and hit-and-run on single targets utilizing stealth and speed.