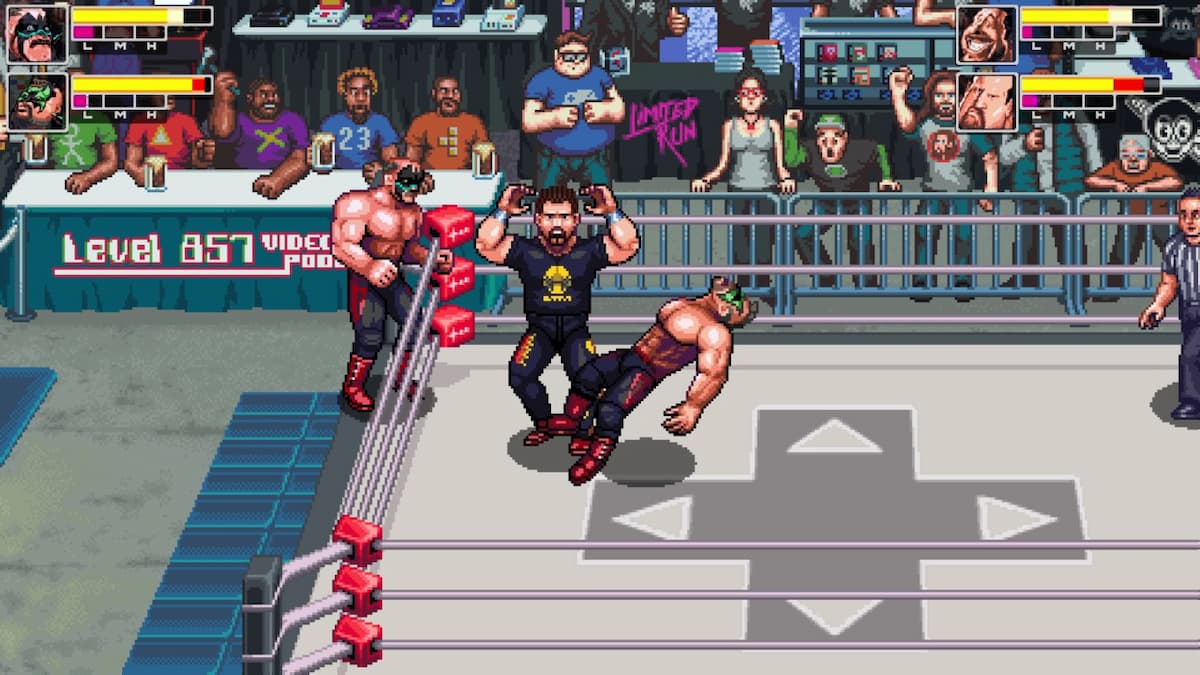 RetroMania Wrestling bills itself as the official sequel to Wrestlefest, the 1991 arcade wrestling classic. With its simple controls and fast-paced action, it certainly feels like it belongs in the ranks of those old-school brawlers. However, the game does suffer from a lack of an effective tutorial. If you’ve found yourself struggling to win tag team matches, try some of these tips.

Just like in real life, tagging in and out of a match is incredibly important in RetroMania Wrestling. This is because you can recover damage when you’re out of the ring. As you get beat down, your life bar turns from yellow to red. If you can tag out, you’ll recover some of that health, but if you stay in, it’ll go away completely.

On top of that, if you aren’t switching in and out, your tag team partner won’t build any of their grapple meter. If you have to switch to them at the end of the fight, they won’t be able to land high-impact moves. In our experience, this can quickly lead to the CPU turning the tides and stealing a victory.

Make sure to keep both characters topped up in both health and meter if you want to secure the victory.

Don’t be afraid to get out of the ring

Even if you’re able to manage both your wrestlers effectively, you still might struggle to win some matches. RetroMania Wrestling is a tough game even though the controls are simple. The CPU can come out of nowhere to clutch a win from the jaws of defeat.

One tactic we’ve found helpful is to hop out of the ring. Importantly, you have to do this near your tag team partner. Once your opponent follows you out, your partner will start pounding on them, while you can jump back into the ring and build up your meter by taunting.

Not only are you getting a nice reprieve from the CPU’s tactics, but you also might just win via count-out. A win-win if we’ve ever seen one.

When you go for the pin, your control switches to your partner

Of all our tips, this is the most important one that the game doesn’t make immediately clear. When you finally go to pin your opponent, your control switches to your partner. You’ll need to act quickly as your opponent’s partner is coming to break that pin-up.

Wrestling fans know this old song and dance. It’s a mainstay in tag team wrestling. You beat a guy down and seem to have the victory locked up. Then, at the last second, their partner elbow drops you, and the tides shift. RetroMania Wrestling lets you stop that and ensure victory by slapping around that partner before they can get to your pin.

It’s a welcome mechanic because it means you’re not relying on your AI to rush out and save the day. However, the game doesn’t tell you to do it, so you might catch yourself unable to secure the pin early in your time with the game. If that’s the case, make sure you take our advice and protect yourself. That’s what a good tag team partner is for anyway.

Follow the tips, and you’ll quickly become a proficient tag team wrestler in your quest to capture the NWA World Championship.