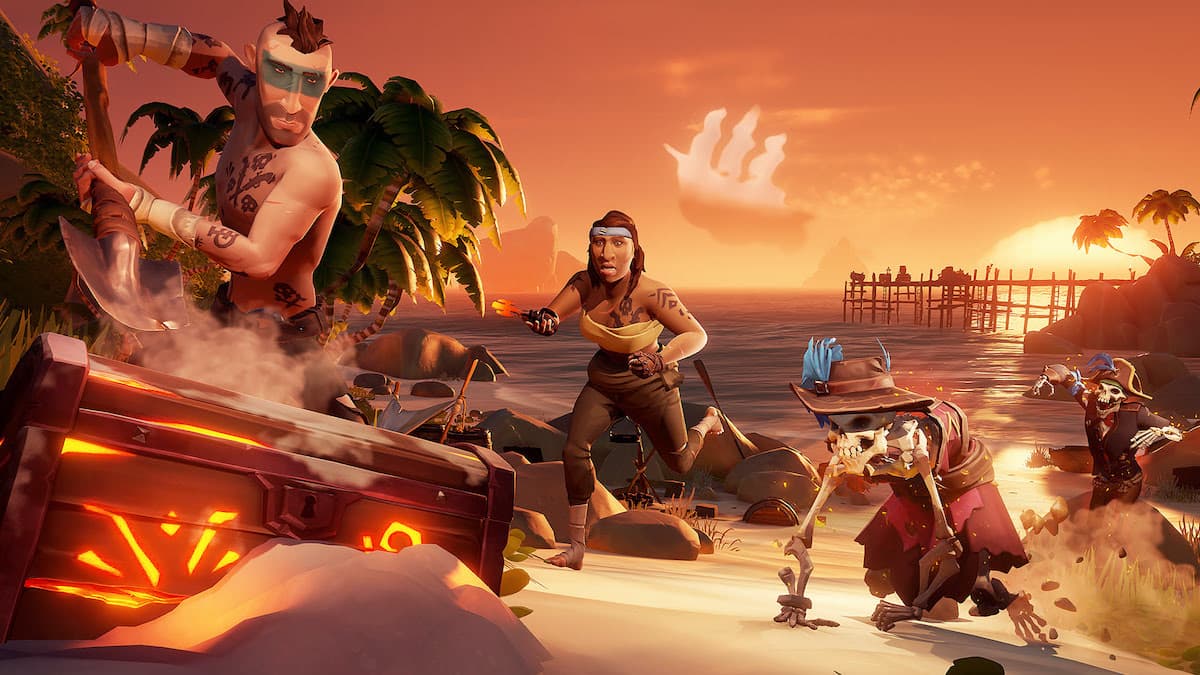 Online pirate game Sea of Thieves is all about plundering and looting, but always expect resistance and opposition as you jump from island to island. When you’re not battling real-life players, you’re fending off attacks from NPCs, with different mob types putting up a fight on land or giant creatures attacking your ship on sea.

Skeletons are most common and basic enemies in the game, coming in a number of different varieties. The normal white skeletons will be wielding flintlocks, blunderbusses, or cutlasses, with some eschewing weapons to claw at you instead. In small numbers, these skeletons rarely pose a threat, but in swarms, it is easy to get overwhelmed. Be sure to attack the firearm-wielding skeletons first, and you can block cutlass and claw attacks with your own cutlass.

Skeletons take a few hits for them to shatter completely, but you can also use firebombs and blunderbombs against them. Be wary of skeletons that pop out of the ground with gunpowder barrels — try to hit the skeleton itself and not the barrel. Otherwise, you may get caught in the barrel’s large explosive radius, but hopefully take a lot of the other skeletons out too. Skeletons can also eat food to heal, so attack them to interrupt their healing animation. Plant-covered skeletons can heal with water and rain.

Gold Skeletons move slowly, but they are resiliant to hits from your cutlass. One of their weaknesses is water — gather water with your bucket and splash the gold skeletons with it. They will rust, and you can easily off them with a blunderbuss shot. It may be easier, however, to lead them into bodies of water and let them rust in there. Alternatively, firebombs and cannonballs are also very effective tools against Golden Skeletons.

Ghostly skeletons will only be tangible if exposed to light — shine your lantern at them and you can hit them with regular attacks. You can fight these skeletons normally during the day. In the Fort of the Damned, you will fight a variation of these Shadow Skeletons called Shadows of Fate, and they will require different lantern colors from the Flames of Fate to make them tangible. Make callouts when playing with friends and coordinate which colors you will need to use.

These higher level skeletons have the same tactics as regular skeletons, but they will have more health and take more hits to kills. These captains will have a red name above them, and you’ll find them during Order of Souls voyages, fort battles, or randomly in the world. Captains can drop Captain’s Orders quests, bounty skulls, and gold pouches. You may also find other captains like Ashen Guardians, who will drop more valuable loot.

Related: How to defeat Ocean Crawlers in Sea of Thieves

These creatures from the ocean depths come in three different varieties, all with different strategies for defeating them. They have a chance of dropping Siren Gems.

These tanks are slow, but they pack a punch. Crabs have an AOE attack that kills in one hit, and they can produce shields for their fellow Ocean Crawlers — they’ll be immobile and vulnerable during this, though.

These Ocean Crawlers will glide gracefully and shoot electric orbs at you. Once they are covered in electricity, any of your attacks on them will electrocute and damage you.

These clamheads will charge at you, so attack them after they make their move and trip. They can also produce green spores, which affect your vision and inflict minor damage.

Related: How to defeat Phantoms in Sea of Thieves

Phantoms will wander islands, and they are a lot more wiley than skeletons. These ghost skeletons will teleport around, hitting you with their cutlass and charge attacks with the occasional gunshot. It won’t feel like you’re hitting them with your cutlass, but a few sword slashes will cause them to float up and essentially deflate and dissipate.

Related: How and where to find and defeat Sirens in Sea of Thieves

Sirens will spawn if you’ve been in the water for a time, and they will usually come in swarms, led by a Siren Leader. They will slash at you and shoot bubbles at you; you’ll be slower swimming around in the water than you would running on land, but you should still be able to dispatch them with cutlass swings and gunshots. They may drop Siren Gems, and Siren Leaders may drop a Trident of Dark Tides.

Related: How to summon and find the Megalodon in Sea of Thieves

Sea of Thieves veterans are familiar with an ominous music cue while sailing the sea, which marks the arrival of a megalodon. There are five fives of megalodon, all of different colors and rarity, though the strategy against them will remain the same. It will circle your ship, vulnerable to cannon fire, and the music cue will change once it charges and tries to attack you with its teeth. Unload your cannons at the megalodon — if you hit it enough while it charges at you, you will interrupt its attack. The Trident of Dark Tides is very effective against the megalodon — perhaps too much so.

Related: How to find and beat the Kraken in Sea of Thieves

If there aren’t any other world events at the moment, there is a chance that a kraken may spawn on you in the middle of the ocean You will hear a music cue and the water surrounding you will become inky and black. Kraken tentacles will come out of the water and attack your ship. Attack the tentacles one at a time with your cannons, and avoid getting grabbed and dragged into the water.

Krakens will drop a good amount of loot upon defeating it, and you can also find and cook kraken meat — sell them for a good price at a seapost.

Snakes will be widespread on most islands, and they are able to spit venom or bite you. This will give you a poison effect, taking away health little by little for several seconds and impeding your vision. These snakes are easily killed with one hit, though, and some Merchant Alliance voyages will require you to cage them.

Sharks will appear if you are in the water for too long, and their bites are quite dangerous. If you’re brave enough, attack these sharks with your cutlass or firearm; a couple of blunderbuss shots should do it, and they will drop cookable meat upon death.