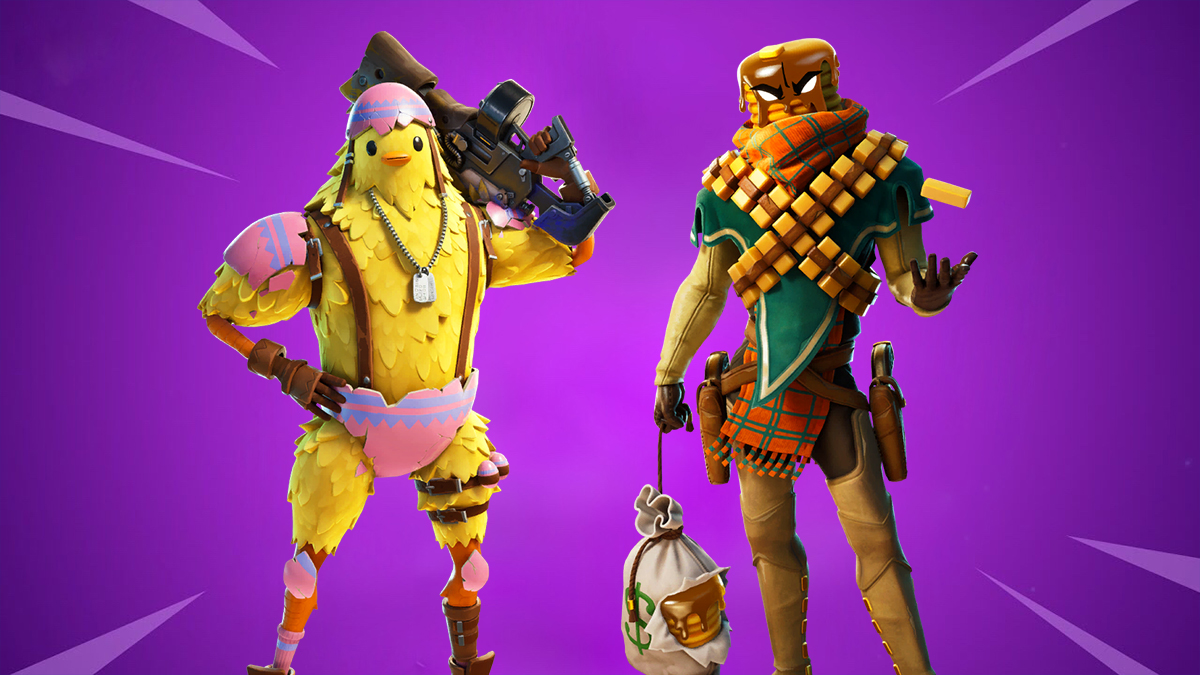 Fortnite’s meme game is strong, whether it’s silly in-game events or big crossovers with other franchises. We avoided including any preexisting characters here, but we’ve gathered a list of the funniest and best meme skins the battle royale game has to offer. If any of them get a chuckle out of you, then they probably belong in your collection too.

Cluck is literally an Easter egg. Normally that phrase refers to a hidden message or reference to some other property inside of a game, but in this case, he’s a literal chicken hatched from a pastel egg. Bonus points for having such a close resemblance to a marshmallow Peep.

Ol’ Hanz here made the list of the best 2021 Fortnite skins, and he was released as an April Fool’s Day joke that same year. Owing his popularity to a real-world stock fiasco, Hanz Stonks was created in response to the Reddit-GameStop stock market war. Those dead eyes would be intimidating across the battlefield at any time though.

Real-life Fabio has graced the cover of many a magazine and book, so it was only a matter of time before he found himself reference in Fortnite. In this case, he’s been turned into a totally shredded unicorn, which should make certain corners of the internet quite happy. Props for achieving such a fine physique — it can’t be easy to lift weights with hooves.

The level of derpy-ness in Fishstick’s face is unrivaled. Maybe he was inspired by the infamous South Park joke. Maybe he’s the result of the art team going out to a sushi dinner. No matter how he originated, Fishstick has been flopping around Fortnite’s island ever since his aquatic pals were introduced in Season 7.

There are a lot of animals on this list, but J.B. is the only primate. He’s a reference to real-life space monkeys: there’s a history of more than 30 of them being sent up in rocket ships during the space race. He could have easily been a goofy take on that subject, but instead Epic gave him a suave look and a name that spins his chimpanzee surname into something that sounds more like a Russian cosmonaut.

Similarly, a meme character called Major Mancake could’ve gone in a few different directions. Epic Games decided to make the major a wild west gunslinger, with fierce eyes that glare through his syrup-covered face. He was introduced as part of a Fall Guys crossover, and unlocking him means earning a bunch of other breakfast-themed gear.

It’s a cat with muscles. Need we say more? Seriously though, the internet loves cats, so a feline-like Meowscles was inevitable. Seeing such a buff body with an uwu face makes for a great visual gag too. Plus, his different color options mean that cat lovers can cosplay as their favorite breed.

Peely has been a part of Fortnite for a long time now, and like many other meme outfits on this list, including a banana suit in the game was bound to happen. It’s funny in its own right, but Peely is also a reference to Peanut Butter Jelly Time, one of the first breakout meme videos on YouTube back in 2008. That’s nearly a full decade before Fortnite even launched.

Rippley (along with his Sludge and Purple variants) is the only self-referential meme on this list. He’s a living glob of Slurp Juice, a healing item that hasn’t been regularly seen since Chapter 1. As a predecessor to the Slurp Legends costumes that came later down the line, Rippley stands tall as an originator and a creative reference.

Finally, we have Toona Fish. He might be a spin-off of Fishstick, but he’s so much more than that. First, the art style looks nothing like any other skin in the game. Toona Fish is modeled after 1930s rubber hose animation, with a look that resembles Mickey Mouse in Disney’s Steamboat Willie. It’s the most old-school reference in the game, and you’ve gotta love the smiling guitar he carries around. His name is a play on the word “tune,” after all.