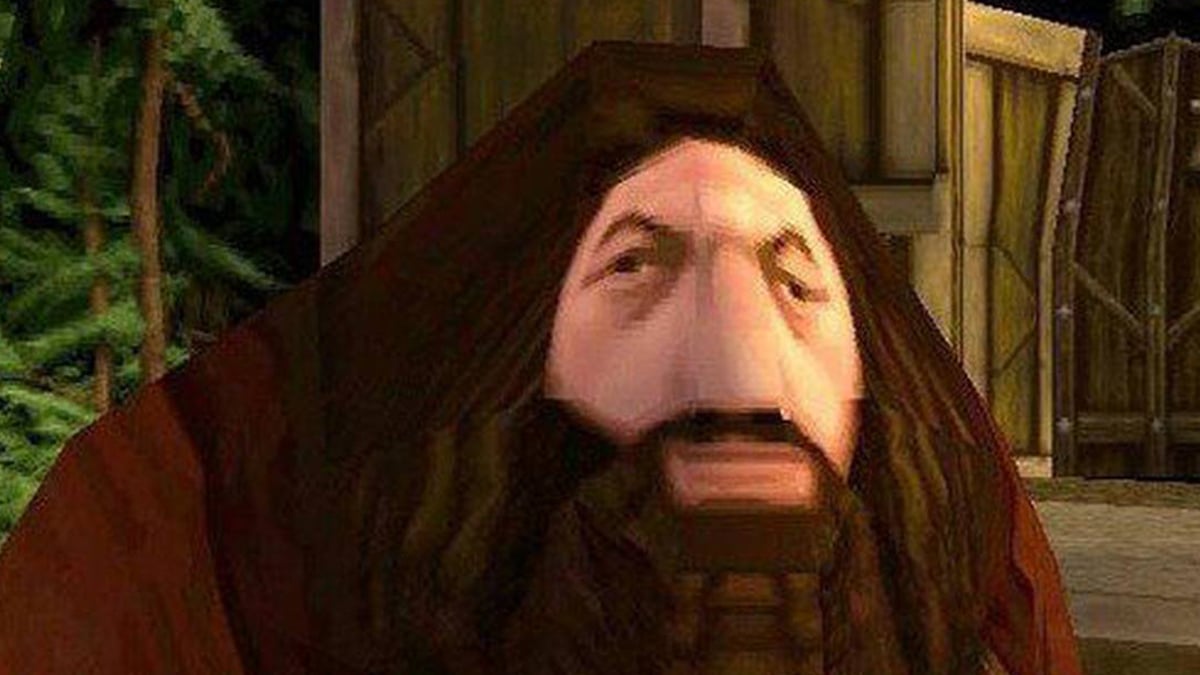 If you’ve spent some time on the internet, then you’ve probably come across the PS1 Hagrid meme. The sad face has been used in a number of memes and pithy responses, and it’s actually a lot older than you might think. Here’s where the meme comes from and some of the best jokes featuring ol’ Hagrid.

Related: What is the origin of the Press F to Pay Respects meme?

This particular model of Hagrid comes from the PlayStation 1 game Harry Potter and the Sorcerer’s Stone. During the adventure, you’ll do some quests for Hagrid, the Hogwarts groundskeeper. There are no great-looking face maps in The Sorcerer’s Stone on PS1, but for whatever reason, Hagrid looks extra sad. Actor Robbie Coltrane brought an endearing, fatherly aura to the character that made his bond with Harry so believable. In the game, his likeness just looks glum.

The image above is the first known meme of good ol’ Hagrid, but its creator is unknown. It’s 20 years old now. Yes, really — this image first appeared in a forum way back in 2012. The deliberate misspelling of “Haggord” is very in line with modern meme styles, and the rest of the line plays up the character’s heavy accent. We have whoever made this first image to thank for starting the trend, but it didn’t take off immediately.

YouTuber Benzaie put their own spin on the joke with a PhotoShop. During a Let’s Play series, they remarked on the model’s resemblance to a blobfish. The meme was starting to get more attention, but it hadn’t broken into the mainstream just yet.

It wasn’t until 2016 that PS1 Hagrid really started getting celebrated. Twitter user @Glock_Lesnar (whose account is now private), also picked up on the sadness of the character’s face and remarked on it. This was the watershed moment. Since this tweet (and others like it around the same time), the floodgates of PS1 Hagrid jokes, tributes, and all-around appreciation have been thrown open.

To kick off the best picks, we’re going back to Twitter. YouTuber @AlphaOmegaSin shared a glow-up of everyone’s favorite groundskeeper. If only raytracing could improve everyone’s facial features like this.

Twitter meme staple @YassifyBot also gave Hagrid a new look, using AlphaOmegaSin’s glow-up image. ‘Yassifying’ faces (giving them a full makeover with lipstick, eyeliner, and other bits of makeup) is funny enough as it is, but it’s something else to see the drastic contrast of a clean-shaven, done-up Hagrid. The beard shadow becomes a chiseled chin too.

It’s not just still images that get made though. Hoenn Trumpets created a full PS1 Hagrid mod for Super Smash Bros. Ultimate. Hagrid is mapped onto King K. Rool, which works thanks to their similar body shapes. It’s also funny to see the peaceful groundskeeper fire cannonballs from K. Rool’s massive musket.

Finally, we have another brilliant fan project. PS1 Hagrid’s Wonderful Adventure is a full-on album you can listen to on Bandcamp. The six instrumental tracks are based on the “comfy” vibes of Hagrid’s hut. We don’t know exactly who made this album since they credit themselves as “PS1 Hagrid,” but hats off to the producer who put these jams together.