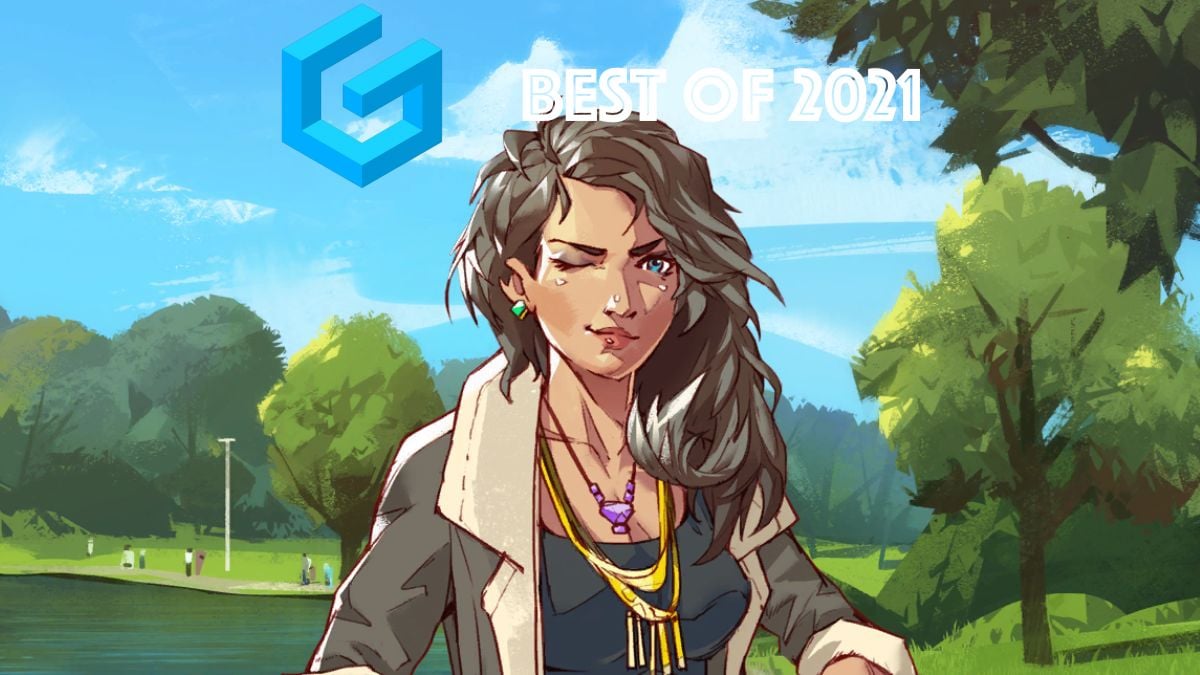 The fascinating thing about indie games is that they’re unlimited in what they can do. They aren’t held back by a big company that can dictate what can and cannot be in them, making each title that comes out in the genre different. This list has our top five indie titles released in 2021, all of which have a great story, engaging gameplay, and amazing overall quality to them that puts them over the rest of the titles released this year.

In a year in which many visual novels have been released, Gnosia stands out as one of the best of 2021. You play as an amnesiac crew member aboard the ship. Some of your crew members are malicious beings known as Gnosia and it’s your job to find out who. The catch? Every time you find out who the Gnosia is, successfully or not, you are brought back to the beginning, repeating each day with additional crew members and conditions. It’s your job to find out more about who everyone is, the underlying circumstances of the time loop, and how to break out of it.

The gameplay is much like the beloved tabletop game Werewolf where everyone is assigned roles each route. In some loops you’ll be a regular crewmate, in others you’ll be the Gnosia, or a different role like Guardian Angel. You’ll have to deduce who is lying and point out the real threat. Or, if you’re the bad guy, you’ll need to point the finger at someone else. If you’re a fan of social deduction games but always wanted an emotional tale attached to it, Gnosia is a story that will stick with you for a long time after you put it down.

Escape Simulator is an online escape room where you can play with your friends. Much like regular escape rooms, you are tasked with solving multiple puzzles, but the game takes it a step further by having a multitude of rooms for you to solve before you can reach the end. Just like in real escape rooms, you’ll have to search every nook and cranny in order to find keys or pieces to one of the puzzles in the room. The rooms that come with the game are creative and highly interactive. With the addition of community-made rooms, there’s new content constantly coming out for Escape Simulator that will keep you and your friends entertained for hours even after finishing the base rooms.

In Boyfriend Dungeon, you play as a young adult who moves into their cousin’s apartment for the summer. You’re there to get out of your comfort zone and finally start dating people. To help you gain confidence in yourself and get to know people, you go into dunjs to earn some cash with cool-looking weapons. But it turns out those weapons you’re wielding are the very people you can date. As you go through the game, you’ll hack and slash your way while getting closer to your shapeshifting weapon of choice.

The game has a diverse cast of romance characters, including non-binary romance options, and in a genre that’s heavily dominated by cis-gendered, white characters, it’s incredible to finally see more people in the world get represented in a tasteful way. Overall, Boyfriend Dungeon is a much-needed title in the romance genre that teaches players about the good and bad of dating, emphasizing that even with the bad, you shouldn’t let that stop you from being happy.

The popular tabletop game Gloomhaven found its way onto Steam this year. You take control of a team of mercenaries, who adventure throughout all of Gloomhaven to face the terrifying creatures that plague the land. However, if you’re not feeling up to playing the game alone, you can play with three other friends online, which is the best way to experience this game.

Each mission you complete, known as scenarios in this game, will unlock items in the shop and new missions, some of which are branching. So, if you decide to side with Jeksarah, a woman who wants to overthrow the government and replace them with the undead, not only will you be locked out of certain quests tied to the incumbent government, but the land of Gloomhaven will be changed forever. With 11 mercenaries to unlock, totaling 17 total playable characters, there’s a character for everyone. Gloomhaven is a comprehensive, incredibly tough game that’s faithful to its source material. For those looking for a challenging but rewarding experience to play with their friends, Gloomhaven is a title you all should pick up.

Originally a mod for The Elder Scrolls V: Skyrim, The Forgotten City is a time-loop mystery that’s now a fully-fledged video game packed with updated graphics and voice acting. You’re transported back 2,000 years to a Roman city. You’re told that in this city, everyone lives under the Golden Rule: if one person commits a crime, everyone suffers and is turned into gold. You’re then tasked with preventing the Golden Rule from being broken.

The game does a fantastic job at exploring the moral dilemma of having the perfect city with no crime. Although it sounds good on paper, you’ll come to realize just how hard that really is. No one is perfect in The Forgotten City — they’re all flawed individuals who might end up breaking the Golden Room, dooming everyone, and forcing you to start from the beginning. But thanks to the game’s wonderful time-loop mechanic, you keep all the information you’ve learned as well as the items you picked up. The Forgotten City is an incredible mystery that makes great use of the time-loop mechanic and it’s one game that you won’t be able to put down until the credits start rolling.