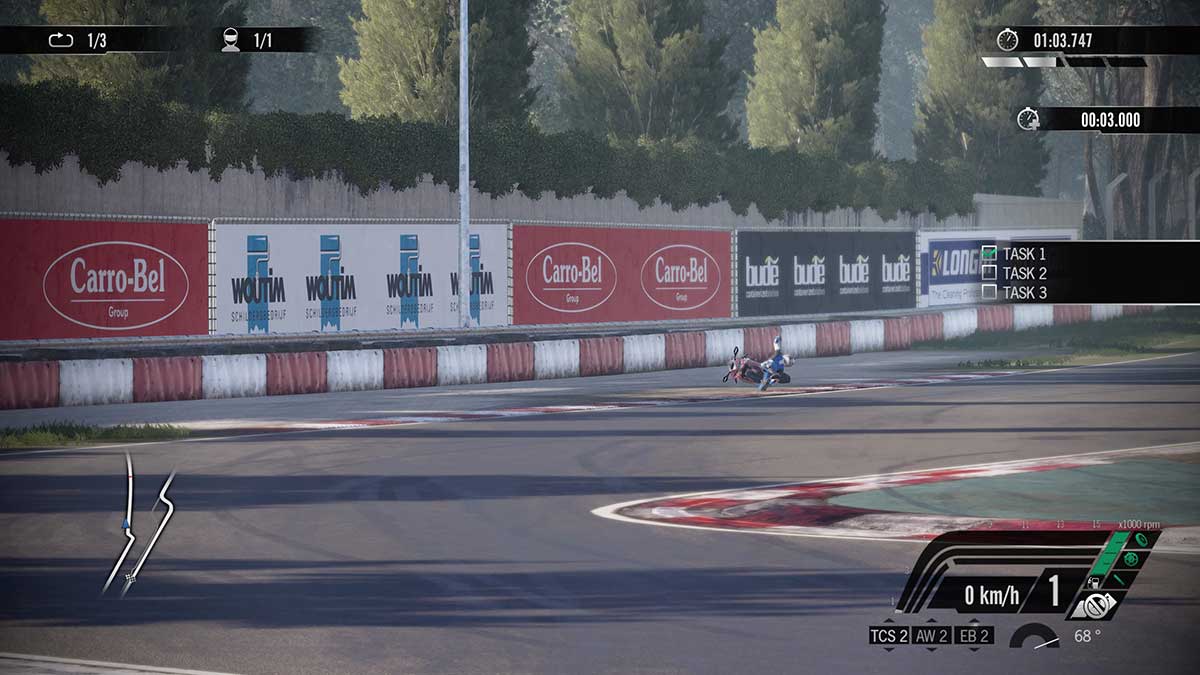 The early stages of getting into RiMS Racing will see you crashing and throwing your rider off their bike more times than you can count. It’s hugely frustrating and will make you want to quit the game. However, there are certain things you can do to stop falling off your bike and start enjoying the game more.

Grass and gravel are deathtraps

You should generally try to avoid leaving the track if you can help it. When grass and gravel are involved, it’s sometimes better to stick to your course and smash into a barrier because the death animation will be quicker than if you spin out and have to watch your rider and their bike skid out of sight. If you approach a corner and see yourself getting near either grass or gravel, give up and know that you’re falling off. The only chance you have is if you can keep driving straight and get back onto the track.

Other riders are out to kill you

If you’re close to the pack in a race, get away from them as soon as possible. If you touch another rider’s bike, it’s you who will pay for the crime. For some reason, the game’s AI doesn’t seem to detect you, so if you get in its way or get too close to it, there’s a 99% chance that it’ll ram you, brake so hard you ram it, or bash you off to the side. Whatever the case, you’ll fall off your bike. Look for the gaps riders leave when they’re trying to overtake. These are the best opportunities you have to overtake unless you can pass a few of them by on a good straight bit of track.

Corners can be nasty in this game. The best way to approach them is to stick to the speed the arrows on the track are telling you to and edge around corners at what feels like a snail’s pace. Brake and accelerate in quick succession to tighten your turn, then slowly speed up after a corner to avoid spinning out.

It’s far too tempting to pull the trigger all the way down when you’re out of a corner or see a good bit of straight road. If you do this, though, your bike may spin out and take your rider with it. So instead, you need to adjust to gently pulling the trigger, so you rev the bike up without causing it to throw itself forward from under your rider. This is particularly important after corners or slow periods because the huge difference in revs can have dire consequences.

Don’t be an idiot

This final tip might sound like a joke, but it’s not. Don’t try to cut corners at high speeds, don’t try to overtake on the grass, and don’t try to do anything that you’d do in Forza Horizon 4. This game is a motorcycle racing simulator. If you try to pull anything like that, it’ll throw your bike and your rider to opposite ends of the track. Skipping corners and jumping even slightly on a bump outside of the track will cost you precious seconds and make you feel as stupid as the ragdoll rider looks.