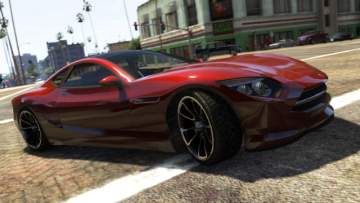 GTA V’s San Andreas has been filled with easter eggs and secret for the players to discover. Many have been found, many haven’t yet, but what we have seen so far is enough to write and publish a dedicated article on this matter: so here we go, take a look at all the easter eggs and secrets we found on the Internet about Grand Theft Auto V (now available on PC, too).

Back to the Future

Rockstar Games has hidden two references to Back to the Future film trilogy in Grand Theft Auto V. The first is the electro with “1.21 GW” inscripted on it: “1.21” is the same voltage required by the DeLorean. The second is the name of a church included in the game: “High Valley” is the name of a town appeared in the movies.

Trevor can buy a jacket very similar to the one of film Drive’s protagonist. The only difference between movie and game is the logo on the jacket: a scorpion in Drive, a crab in GTA V.

This one is my favorite. Once you complete a couple missions with Floyd, you will see an axe stuck in one of his apartment’s doors. It is a clear reference to the movie The Shining, when Jack Nicholson gets mad and tries to kill his wife.

Random even “Broken Deal” in GTA V is inspired to a scene from the movie The Old Place, where everything is identical: the corpses, the pick-up, the dead dog, etc.

Between hours 19:00 and 20:00, you will be able to see on one of the mountains a Thelma and Louise dedicated easter egg.

The film The Grey has entirely inspired one of the scenes you can see in a robbery mission.

Grand Theft Auto V includes a car called JB-700 that is clearly an easter egg dedicated to 007 – James Bond films. The car includes a series of gadgets you can use during your missions, and is clearly inspired to the iconic 007’s Aston Martin.

Furthermore, the license plate has the inscription “4G3NT”, a reference to the long awaited game by Rockstar Games. Once upon a time, it was supposed to be a PlayStation 3 exclusive.

In some GTA Online garages you might be going to buy, you will find front bumpers of cars clearly referring to Liberty City with their license plates.

Artwork from GTA Vice City being used as advertisements

A wall in the bar Yellow Jack Inn has many bills on the wall near the entrance. You will notice that those $100 bills don’t have U.S. President Benjamin Franklin face on it but a woman included in a famous GTA San Andreas artwork.

GTA V includes many references to Grand Theft Auto IV’s sole protagonist Niko Bellic. On Jimmy’s laptop, in Michael’s house dining room, you can even check his profile on the Facebook-like social network Life Invader, even though he doesn’t seem to be online. Remastered versions include more details in his profile: Niko works as a taxi driver in Bellic’s Cab company and there’s even a post where he wishes a happy birthday to his cousin Roman.

You can also find “Wanted” posters somewhere in Los Santos, with Niko’s photo and description: those posters were among the promotional material used by Rockstar Games before GTA IV launched in 2007.

Lester talks several times about Niko Bellic when he offers robbery opportunities to the protagonists of GTA V, referring to him as a good guy to do the job.

Finally, Yellow Jack Inn bar has a photo on the wall near the entrance where Niko Bellic guides a car that is not present in GTA IV.

In Los Santos you will find GTA: San Andreas’ CJ Grove Street gang. It’s not a coincidence that the painting on the wall says “welcome back”…

A snowman is hidden behind two doors in a building housing a refrigeration company in the East area of Los Santos.

Hurricane Sandy is referred to by various media in Grand Theft Auto V, that say a power hurricane has flooded Liberty City.

Rockstar Games wanted to include this also in remembrance of what happened in 2012, when Sandy forced to postpone the launch of GTA V’s second trailer.

Wall of the Wax museum

This is almost identical to the mural located in the vax museum in Hollywood.

A reference to Call of Duty

In the game, there are multiple references to a game called Righteous Slaughter 7, a mock-up of Call of Duty series being joked around because of its annual releases.

The game is being played by Jimmy, Michael’s son, and when he answers Franklin if he is playing it too, Franklin asks that he has given up after the second episode.

A link to Red Dead Redemption

Of course there’s a connection between Grand Theft Auto V and Red Dead Redemption. At Franklin Villa, you will find a book in the library dubbed “Red Dead” by J. Marston.

While at a first look you might think the book has been written by someone called John Marston, just focus on what happened in Red Dead Redemption and you will discover the real intention of this easter egg.

At a certain point in the game, John says his son Jack has a passion for reading and, while he can’t write, his son can and will eventually “write a book in the future”. Probably this is the book he was talking about.

There’s a reference to the three wise monkeys, too, from the fascinating oriental culture to Grand Theft Auto V.

After a robbery doesn’t work properly, Trevor, Franklin and Michael’s reaction is pretty like the three monkey’s when they discover their government is corrupt.

If you go under water in the northern part of the map, you will find another UFO-inspired easter egg. Well, it’s actually an UFO…

A reference to Alien

You can find an Alien-inspired easter egg in North Yankton. Turn right under the bridge once you are there.

You will find tanks, fighter jets and helicopter from the beginning of the game at a secret location reported on map in collector’s edition of the game.

The ghost on mount Gordo

It has become something of a urban legend but, yes, it actually exists and you can see it from the top of mount Gordo. You will see the ghost from 23:00 to 0:00 while it is levitating above a bloodstain.