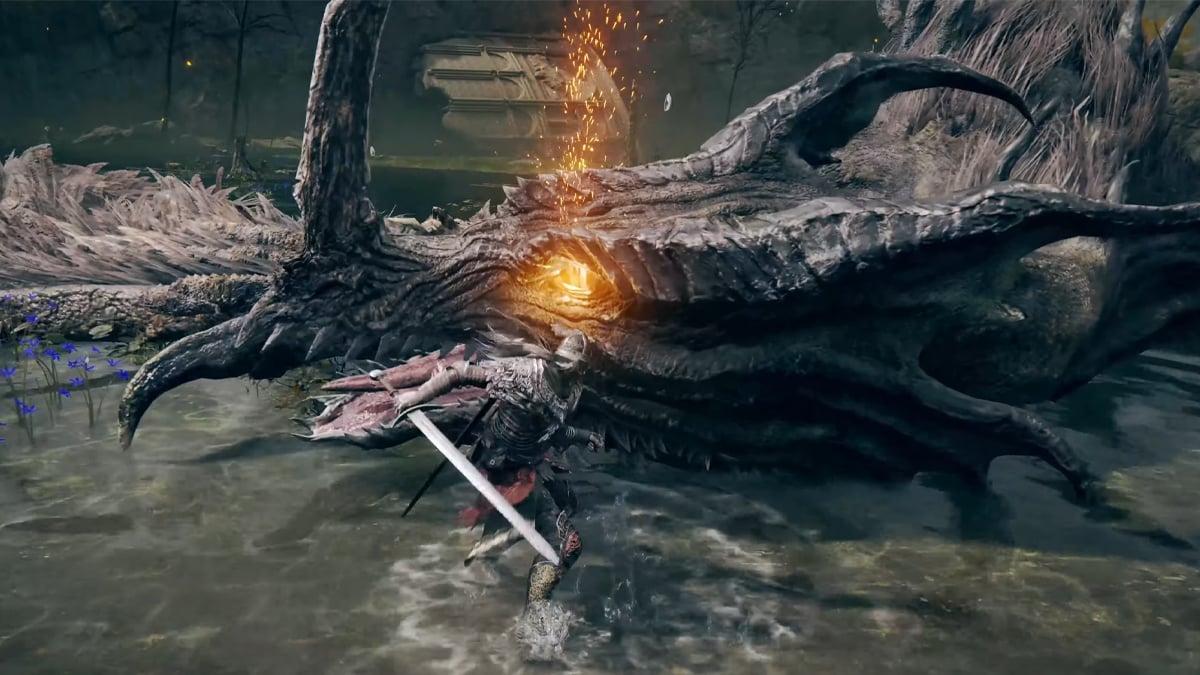 We’re getting closer and closer to Elden Ring’s release date. While we still have a few months to go before we can explore The Lands Between, From Software and Bandai Namco have given us a new opportunity to see the game in action. This time, it was a 15-minute demo packed with exciting stuff like Sekiro-style finishing moves, a new spin on bonfires, and a proper map.

The gameplay preview contained a few boss fights, the first of which pitted the player character against a giant dragon — this is from the team that made Dark Souls, after all. The dragon attacked with the usual claw swipes and fiery breath, but it’s how the hero delivered the final hit that’s particularly noteworthy: it was a deathblow very reminiscent of Sekiro: Shadows Die Twice. In that game, protagonist Wolf finished off bosses by wearing down their endurance and landing a brutal finishing move. It seems Elden Ring has a similar mechanic, as the dragon battle ended when our hero plunged their sword into the monster’s weak point: its eye.

Bonfires have been a staple of the Soulsborne series. While Bloodborne had Lanterns and Sekiro had Sculptor’s Idols, the principle remains the same. In Elden Ring’s case, our save points are called Sites of Grace, and they have a handy new feature — they can guide you to the next place you need to go. A beam of light will trickle out and point toward the critical path, but as the preview said, it’s up to you whether you want to follow it or explore at your own pace.

Speaking of exploring, we also got a glimpse of the game’s map. This is the first From Software game of this style to feature a proper map. What’s more, you can place markers on it to denote areas you wish to explore or an enemy you want to battle once you’ve leveled up a bit. These markers create beacons in the world, pinpointing exactly where you need to go to reach the area you marked.

This is also the first of these games to feature a proper crafting system. Weapons and armor could always be upgraded with various resources, but this preview showed our hero straight-up making arrows. Two kinds can be seen on the menu: Bone and Sleepbone — the latter of which can be used to knock an enemy unconscious if you’re taking a stealthy approach. Both these and their variants required different materials to craft, so there seems to be a wide variety of ingredients to find.

Those are the major takeaways from the preview, though there are a few more tidbits to glean. Remember those goofy pot monsters from the first Elden Ring trailer? Turns out at least one of them is an NPC named Alexander. We saw two additional bosses: Storm Veil’s Godrick the Golden and an unnamed knight wielding a massive rock shield and club on horseback. We’ll be seeing a whole lot more of these sturdy foes in the final game.

Elden Ring was recently delayed to February 25, 2022, but it’ll launch on PC, PlayStation 5, PlayStation 4, Xbox Series X/S, and Xbox One that day. A network test will also be held this month — here’s how to sign up.