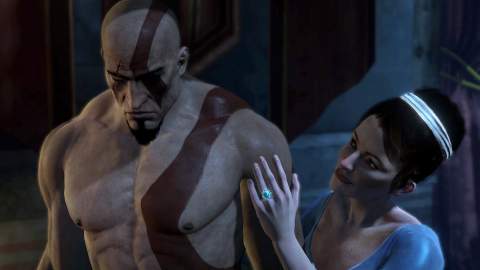 God of War is scheduled to launch on PlayStation 4 on April 20. This is going to be the first new God of War game to be released in 5 years. The last game in the God of War series was God of War: Ascension which was released in 2013 for PS3. What is interesting about this new God of War game is it is the reboot and Cory Barlog is returning as the Game Director. We have seen a lot of cinematic and gameplay trailer of the game (at E3 and other gaming events) and they all came from Sony and Santa Monica, but nothing came from the press via previews.

This status changed today – Spanish Website GameIt posted several never seen before God of War screenshots which new locations. You can check them out below, although the quality is not that good still PlayStation fans will appreciate anything that is related to one the biggest PlayStation exclusive release of 2018.

In addition to these screenshots, over 10 minutes of direct-feed (B-Roll) unedited and uninterrupted God of War (PS4) gameplay footage has been leaked as well. The focus is completely on the Combat and different ways you can kill enemies in the game. It’s worth a watch. Get it below before it is taken down. The better option would be for you to download the video and then watch it.

God of War is scheduled to launch on April 20. The game is expected to achieve GOLD status next week, gameplay length is said to be around 25-30 hours long, and there won’t be any microtransactions element in the game.

If you are planning to buy a PlayStation 4 to play God of War next month then we have a good news for you. Sony has announced a Limited Edition God of War PS4 Pro bundle. It carries a price tag of $399 and comes with – Full Customized 1 TB PS4 Pro Inspired By Kratos’ AXE, Leviathan Gray Dualshock 4 Wireless Controller With Insignia, and God of War Physical Copy And Digital Content. So what are your waiting for – Pre-order God of War PS4 Pro Limited Edition Bundle now via Amazon?