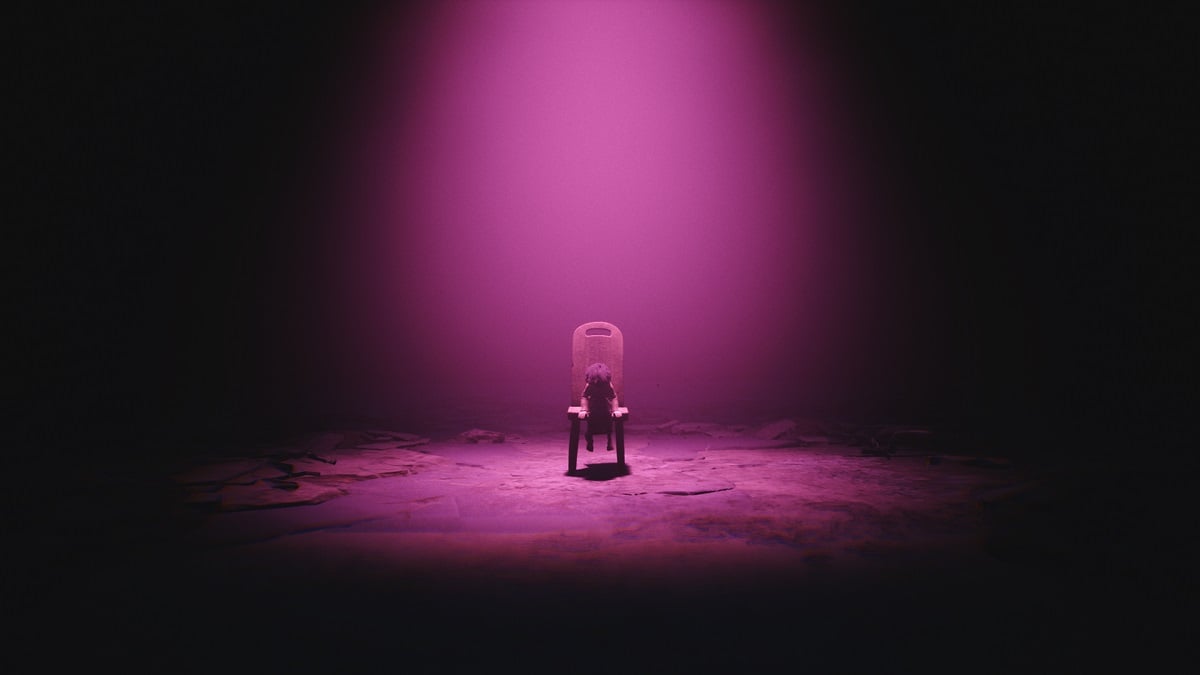 One of the most contentious issues in Little Nightmares II is its climax. After rescuing Six from whatever realm she has been trapped in, Mono and Little Nightmares’ protagonist make a run for it as a massive, purple goop monster — known by the Little Nightmares community as the Squirming Abyss — chases them to the exit.

After Six leaps across a huge gap to safety, you follow suit as Mono. As the bridge around you collapses, you jump to Six, who catches you. However, Six refuses to pull Mono up. After a few seconds, she inexplicably lets go of his hand, which results in him seemingly falling to his death. He doesn’t but, as the screen fades to black, we don’t know if he survives or not. Six exits the TV screen behind her to escape back to the real world.

Debates have raged online as to why Six betrays Mono in Little Nightmares II since it launched. After all, the pair have been inseparable since their first encounter, and they have helped each other escape a myriad of enemies. Why, then, does Six double-cross her new friend at the end of the game?

Six had to make a terrible choice

Fans of Little Nightmares will know that Six is plagued by an unabating hunger, which always seems to be more prominent when a shadowy, glitched version of her appears. It resulted in her eating a live rat and a nome in the franchise’s first game, and killing Lady — Little Nightmares’ antagonist — by biting her neck and absorbing her seemingly magical powers.

As Little Nightmares II’s secret ending shows, Six is still affected by this hunger once she returns to the real world. If she had saved Mono instead of letting him go, they might have escaped only for Six to end up devouring him too. In some ways, she had to make a terrible choice – save her friend briefly and end up eating him due to her condition, or let him fall to ‘save’ his life.

Six was being possessed by her shadow alter-ego

We know that Six has a shadow version of herself. As mentioned, whenever she gets hungry in either game, Shadow Six appears. It seems strange that Six never experiences hunger bouts during Little Nightmares II, and it could be that Shadow Six is actually possessing her.

It would explain a lot of her actions throughout the game. She wants to use the shotgun to kill the Hunter. She warms her hands by the incinerator as the Doctor is burned alive inside. She is seen breaking a mannequin patient in the hospital while she waits for Mono to return with a fuse to power an elevator. And she sacrifices Mono to escape alone.

If Six isn’t in control, and Shadow Six is, it might explain why her evil self elected to let Mono fall rather than save him from the Squirming Abyss. In the game’s secret ending, we even see Shadow Six appear before Six, and moments later, she is afflicted by her hunger pains again, which only adds fuel to this particular theory fire.

Mono had to fall to continue the Thin Man time loop

As we see in the game’s closing moments, Mono survives his fall. Surrounded by the Squirming Abyss, Mono climbs onto a wooden chair and uses his telekinetic powers to apparently force it back temporarily. Mono sits on the chair underneath the purple light that is linked to the Signal Tower, and fans watch on in shock as it is revealed that Mono grows up to be the Thin Man — Little Nightmares II’s antagonist who kidnaps Six in chapter four and who Mono defeats to gain access to the Signal Tower.

If Six had resisted her temptations to eat Mono, if she had saved him from falling, the time loop that Mono appears to be stuck in would end. As such, he wouldn’t grow up to become the Thin Man, kidnap Six, turn her into a monster, and then get defeated by his younger self before the cycle repeats itself. Mono has to be sacrificed to keep the timeline intact, so if Six had saved him, reality would have broken down.

Some fan theories have suggested that Six must sacrifice Mono to defeat the Squirming Abyss. The goop monster appears to be linked to all evil in Tarsier Studios’ horror series, and Six’s monster form might hold the key to beating it.

How? Well, Six’s time as a warped, giant monster in chapter five may have given her insight into how the Squirming Abyss operates. If she gained some insight, into its makeup and potential weaknesses, in her monster form, saving Mono would deprive her of that. This is because saving Mono would have broken the Thin Man timeline, and she would never have become a monster in the first place.

Hopefully, Tarsier Studios will develop a third installment in the franchise, which will provide some answers to our biggest questions.