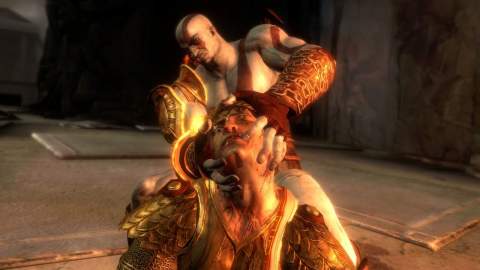 Niflheim Cipher Pieces will allow you access to the realm of Niflheim in God of War. Niflheim is filled with dangers and threats, but also some excellent rewards. Finding any four of the cipher pieces in the game will allow you to get the Niflheim Travel Rune. Bringing this to Tyr’s Temple will then mean you can unlock the Niflheim realm, via the World Tree. In this guide, we show you where to find each piece of the cipher.

Some of these pieces are not easy to get to, and may be in areas that have powerful enemies. It is best to take a slow and steady approach to collecting them, as there is nothing in Niflheim that you need early in the game. Some of them will also be closed off, and can only be accessed when you have unlocked certain abilities.

Ruins of the Ancient

The Ruins of the Ancient are home to one of the massive Soul Devourer Ancients. When you arrive on the beach, engage and destroy this hulking beast. Once you have defeated him, look for a pillar near the cliff. There will be a chest here that contains a Niflheim Cipher Piece.

The Alheim Tower is located in the northeast of the Lake of Nine. Dock at the beach here, then climb up onto the ledge that is accessible from the beach. There will be another ledge to your left. Climb up here and you will be able to see two of the red crystals that you can shatter with Shock Arrows. Destroying them will reveal a passageway that contains a chest. Within that chest you will find a cipher piece.

The Mountain will be familiar, as it is a popular topic of conversation between Kratos and Atreus. When you visit the Mountain for the second time, after finding Thamur’s Chisel, you will come across a new shop run by Sindri. In this area you will find a chest containing a cipher fragment.

In the southern part of the Lake of Nine, you will find the Lookout Tower. Dock at the beach here, then clear out the enemies that will spawn in. Use the nearby paddle statue to cause the spikes to retract. If you hit it four times, the spikes that block your path to the chest will retract. Make your way to the chest, then grab your well deserved cipher piece.

The Hall of Tyr

The Hall of Tyr actually contains two cipher pieces, and you can miss both of them if you don’t grab them while you play out this part of the story. They are very easy to find though, as they are out in the open in the rooms that contain the chains you are there to break. Snap the chains, then grab your cipher pieces. If you don’t get them here, you won’t be back in this room at any point.

At one point in the story, you end up sailing into the belly of the World Serpent. When you get to the chest that contains the item you came here for, be sure to grab the cipher piece in the other chest. The World Serpent is very kind to let us into his belly, but it’s something he is only willing to do once, so you might not want to miss this piece.

That is it, you now know the location for every Niflheim Cipher piece. Getting any four of these allows you access to the realm of Niflheim. Before you enter this dangerous realm, it is a good idea to read our Niflheim Guide. It is not like other areas of God of War, and can be a little tricky at first. For more guides, be sure to pay a visit to our GOD OF WAR GUIDE HUB.