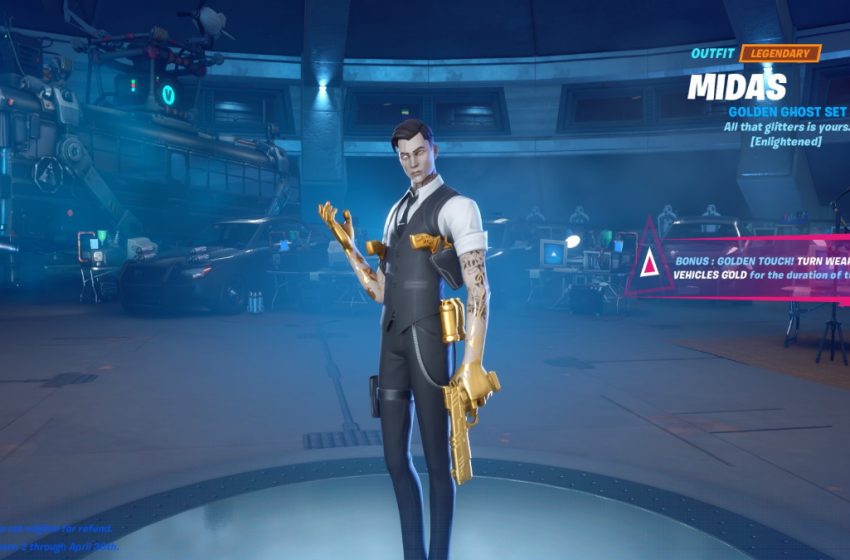 Here comes an update for Fortnite Chapter 2, bringing with it Season 2, where we have new challenges, such as taking down henchmen, disguising yourself as them, looting in particular locations on the map, and much more. The new season is all about secret agents and spies, and the head agent is Midas, who has a golden touch about him, which fits his name perfectly.

To receive Midas, you first need to make sure you have access to the season’s battle pass. The battle pass goes for 900 V-bucks, and this should run you $9.99 from the Fortnite store. You need to make this purchase first before making proper progress for the premium items on the battle pass, such as the worthwhile skins like Brutus and Meowscles.

Because Midas is the head agent of the season, he’s the final reward for leveling up the entire season pass. You need to reach level 100 on the battle pass to have access to him. It’s a hefty cost, but if you want access to the skin, you need to put in the work to do it. A great way to do is going through the challenges in the game, completing the medal punchcard every day, and keep up with the other activities on the challenge table.

When you gain access to Midas, every item, weapon, and vehicle, he touches turns to gold. You also must choose between the Shadow version or the Ghost version when you go to claim the skin. The notable difference is that Midas’ suit is black for the Shadow version, and his Ghost version’s suit is pure white.

You have until the end of Season 2 in Fortnite claim the skin. Make sure you purchase the battle pass to start on your progress early and start running through those challenges.

How to get vehicles in Halo Infinite