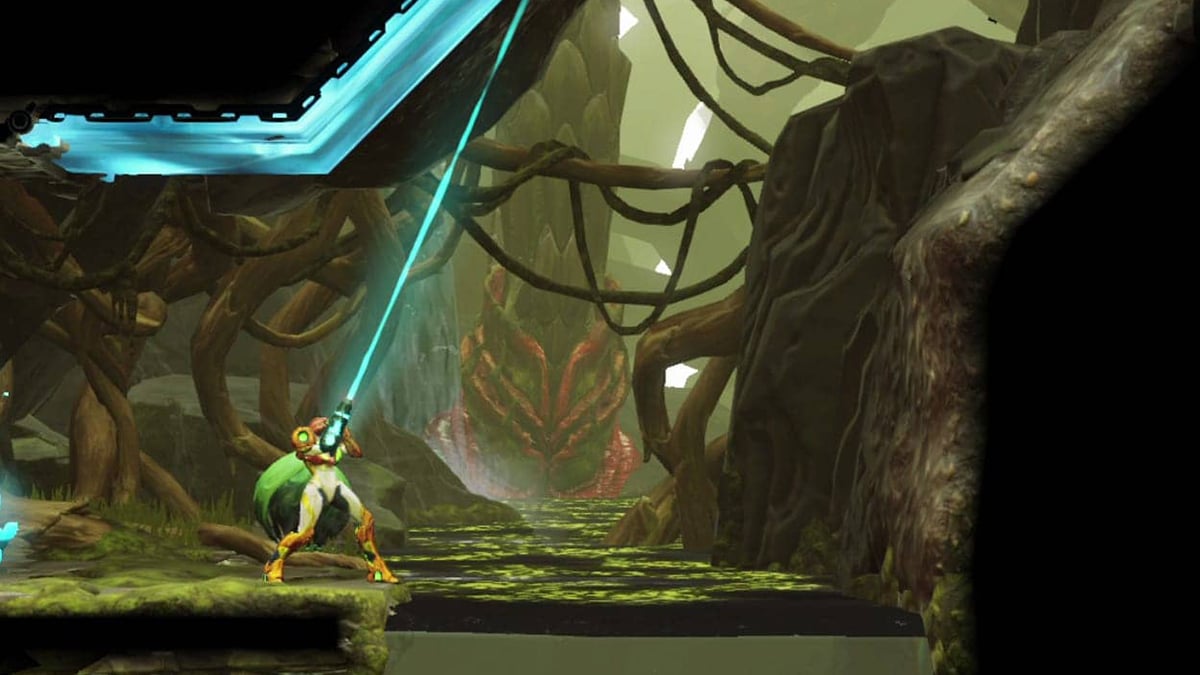 The forest area of Planet ZDR isn’t like the woods here on earth. For one, it’s full of alien monsters like the boss Golzuna and strange flowers that Samus Aran can use as temporary platforms. Two, it’s got a whole heap of collectibles to find among its branches and tunnels.

Collectibles in Metroid Dread include upgrades for your total Missile count, maximum health, and Power Bomb stock. If you want to find all the shiny secrets in Ghavoran, read on – we’ll help you track them all down.

You can get this Missile+ Tank right when you enter Ghavaron from the Burenia elevator. After pulling the Grapple Beam Block, drop down to the Total Recharge Station and enter the next room. There’s just enough space to charge up a Shinespark, so do that and launch yourself to the gap in the ceiling to grab the ledge. Roll on through with the Morph Ball to grab the Tank at the end of the tunnel.

After the golden Robot Chozo Soldier fight, head into the next room, but don’t start climbing. Instead, look to the bottom for a set of Bomb Blocks you can blow through. Follow the tunnels and blow through some other obstacles to reach a large chamber below. From the Spider Magnet lining along the wall, you can use the Grapple Beam to swing over a series of breakaway blocks (sadly what looks like a bridge to the Missile Tank can’t actually support Samus). Swing across the trio of Grapple Points to reach the ledge with the Expansion.

This is found on your way down from the Network Station en route to the Super Missile ability. You’ll pass a rotating plank and a magnetic box that block the path back – that’s how you know you’re headed in the right direction. Stop when you reach a large room with a flying whale enemy. There’s a Grapple Beam Block you can yank out of the way. Tuck into the hole it plugged to grab the Tank.

There’s a trail of Bomb blocks to the right of the Golzuna boss fight room. Use Bombs to blow through them and find a Missile Tank in the rock wall.

There’s a pretty easy Speed Booster puzzle in the room connected to the tram to Elun. Start from there, pull the Grapple Beam Door, and give yourself enough runway to sprint through. Hop up the platforms in the next room tom slam into the blocks in the left-hand wall and grab the Missile Tank inside.

This is found in a straight line up from the Save Station, past the flooded chamber and long Morph Ball tunnel. Climb up at the western end of that tunnel to find a fiery Enky, which you can destroy with an Ice Missile. Past that is a series of tunnels you can climb using the Morph Ball and its Bomb ability. The Missile Tank is found at the top of this winding path.

You can also get this right after you’ve beaten the Ghavoran EMMI and acquired its Ice Missile ability. Exit through the highest eastern door and hop up to the ledge in the next room. Use your new Ice Missile to destroy the fiery Enky blocking the way, and the E Tank will be yours.

Enter the next room past the Enky you just destroyed. Space Jump all the way up and around the passage at the top to find the Tank tucked in a corner.

This is found just below the Energy Tank, in the large open portion of the same chamber. Along the left-hand wall is a Grapple Beam Block you can yank away, but you’ll need to use an Ice Missile on the nearby flower first – it’ll wither away after just a second otherwise. While it’s frozen, yank away the Grapple Beam Block then fire a Missile to destroy its neighboring block. The Energy Part is inside it, so jump to the ledge and tuck into Morph Ball form to grab your prize.

There’s a Storm Missile Block right next to the Green Teleportal, but you’ll need to head to the room to the southeast to remove it. Freeze the flowers there with an Ice Missile to give you enough time to hop on and pop all the green targets before the flower wilts. With the Storm Missile Box gone, you can hop right up and grab the Missile Tank on the Morph Ball-sized ledge.

Start from the flooded chamber beneath the previous Missile Tank, but this time, use the Gravity Suit plus the Space Jump and Screw Attack to burst up through the blue blocks above the water. Open the Grapple Beam door and enter the next room, which is very tall. Space Jump your way up the left-hand wall to find a ledge. Grab it, hoist into the sloped Morph Ball tunnel, and grab the Tank.

Start from the Green Teleportal and Screw Attack your way up to tunnel above. You can cross over the Pitfall Blocks using Cross Bombs to get to the Missile Tank on the other side.

There’s a Missile Tank in the flooded cave right under the Map Station. Bomb your way in from the left, then leap up through the water to the ledge above. Destroy the blocks there, then use a Cross Bomb to zip over the breakaway blocks to the Tank.

There’s one more Missile Tank here, right next to the Burenia elevator. Drop into the water, shoot the block, and jump to the ledge to tuck in and grab it.

This one takes an awful lot of abilities to get, and you’ll need to solve a Speed Booster puzzle too. Starting from the flood chamber next to the Green Teleportal, use the Gravity Suit in conjunction with the Space Jump and Screw Attack to burst through the blue blocks above the water. From there, you’ll want to Speed Boost your way into the neighboring room, but you’ll need to open the Grapple Beam door first. Run through and ready a Shinespark jump in the tall room next door, then rocket yourself straight up the middle – you’ll reveal an upper tunnel when you break through the cave ceiling. Grab the ledge, roll in, and jump your way to the Missile Tank inside it.