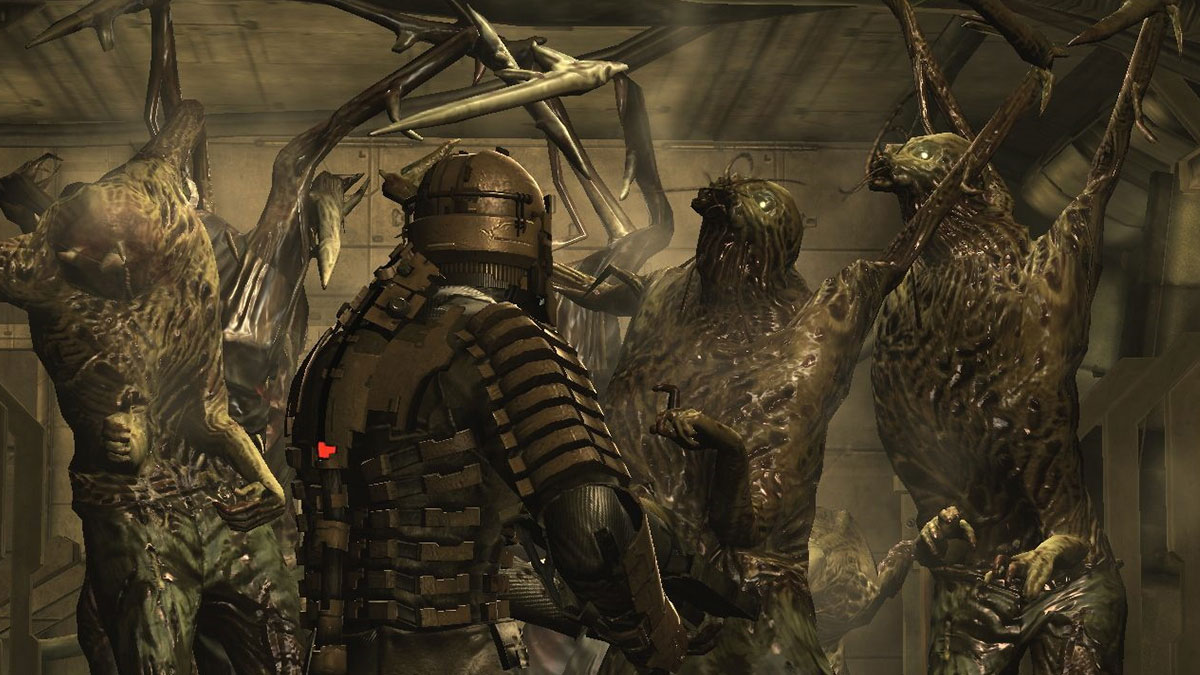 Horror games are meant to terrify you — that’s the whole point. Some succeed more than others, but even the biggest names in the genre have memorable moments that stand out amongst a sea of scares. We’ve compiled a list of some of the most frightening you’ll ever encounter right here. We focused on a variety of scares, which means you won’t see a flood of Resident Evil zombies or Silent Hill hallucinations. There’s just one game per franchise included, but that doesn’t make these moments any less terrifying.

Alien: Isolation sees Eleanor Ripley’s daughter Amanda exploring the Sevastopol space station, which is in the process of being decommissioned. That means there are raiders and rogue androids to deal with, but nothing compares to the classic Xenomorph. When the titular alien shows up, you have to run and hide — and it can still kill you through a locker if you forget to hold your breath when it leans in.

Amnesia: The Dark Descent – The Kaernk

Hiding is a central mechanic in the Amnesia series as well. Tucking into a corner and not looking at the monsters is how you survive each encounter. The Kaernk, aka “the invisible water monster” can’t be seen even if you’re looking right at it. Many players met multiple deaths during this flooded phase of the game before figuring out what was killing them. You can only tell where the Kaernk is by watching the water splash with the beast’s footsteps.

The Dead Space series has always been about dismembering aliens with carefully placed shots, but the second game also has a scenario in which hero Isaac Clarke can accidentally mutilate himself. He has to insert data into his brain through a needle which must pass through his eye because…horror games. If you don’t guide the needle correctly, things will go very wrong very quickly. This is a nightmare scenario for anyone who struggles to put in contacts.

Speaking of things going wrong, Doki Doki Literature Club’s hard left turn into horror took many an early player by surprise. As you write poems and try to learn every girl’s favorite word, you start to get comfortable in this narrative adventure with a dark twist. Staying spoiler free here, this levity doesn’t last long. The girls aren’t safe, and their ultimate fates dabble in some truly macabre and mature topics.

Of any game on this list, Eternal Darkness is maybe most deserving of a remake (Dead Space is the next one scheduled), and that’s because its Sanity system is a bit outdated. The game would frequently break the fourth wall, displaying CRT errors like the mute text above, messing with the volume, and faking that a save file had been lost. These were scary in a genius, real-world sense when the game first released, and there’s potential to mess with players’ minds even more nowadays.

Outlast is perpetually terrifying. Psychos chasing you around insane asylums and underground labs while you’re armed with nothing but a camcorder. The vilest of these stalkers is Eddie Gluskin, known as “The Groom.” He turns others into his “brides” by mutilating their (usually nude) bodies. When you wake up strapped to a table with a slowly descending buzzsaw, his heinous intentions become all too real.

Praising P.T. at this stage is like saying oxygen is good: we know. And yet, the ghostly Lisa is still unrivaled when it comes to corridor horror. She can be spotted several times throughout the short (but oh so scary) experience, peeking at you from a balcony as you loop through the same hallway over and over. When you’re inevitably caught, her horrifying visage will be right up in your face, with a gnarly grin that shows she takes joy in latching onto unsuspecting victims.

There are too many classic Resident Evil scares to count, so it’s best to just go back to the beginning. Whether you decide to play through the first game as Chris Redfield or Jill Valentine, you’ll soon encounter the very first zombie in the legendary franchise. There’s a pause before it notices you since it’s busy feasting on someone else’s guts. The slow, hungry turn that follows is iconic: it’s the first sign of the horrors to come.

Like Resident Evil, it’s hard to pin down a single scariest moment in Silent Hill, but we can at least focus on its most iconic monster, Pyramid Head. He first appears at the end of a long, dark hallway, staring creepily at protagonist James Sunderland. Soon after, he assaults some other creatures and tries to chop James down with his giant knife. Pyramid Head is a metaphor for guilt, and as such, he’s unkillable whenever he shows up. You can only run and pray he doesn’t catch you with that way-too-big blade. The rumored remake of Silent Hill 2 and other new games in the series means this monster might be coming after us again pretty soon.

Until Dawn is the game that spawned an entire lane of horror titles from Supermassive Games, including The Dark Pictures Anthology and the VHS nightmare of The Quarry. One of Until Dawn’s core mechanics is motion control, and even the smallest twitch can get you discovered (or killed) when the game prompts you to be still. It’s easier said than done, especially when monsters are literally screaming in your face.