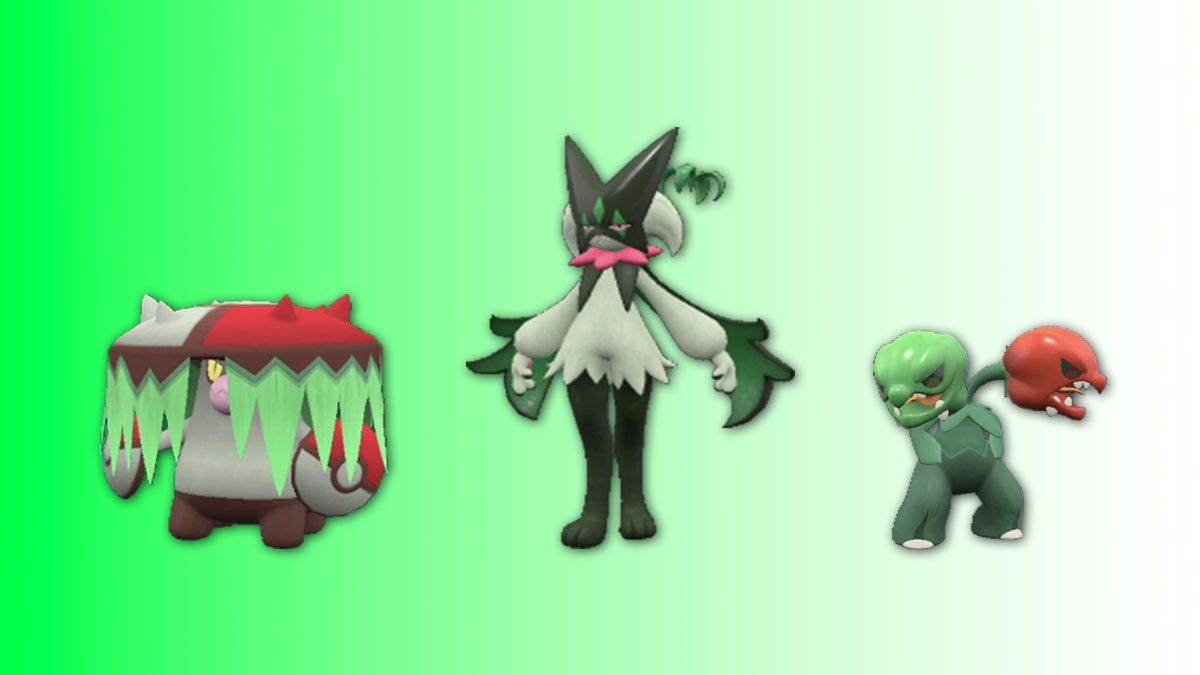 Grass types are classics in the world of Pokémon. Bulbasaur is the inaugural entry in the Pokédex, a trend that continues to this day. But just because Grass Pokémon come first on the list doesn’t mean they’re all great. Gen 9 added a bunch of new ones, and there are some clear standouts. We’ve gathered ten of the best Grass Pokémon in Scarlet and Violet here, listed alphabetically. Evolutions are grouped together, so the actual number of Pokémon shown is above 10.

Related: The 10 best Water-type Pokémon in Pokémon Scarlet and Violet

It took a long time for us to get a tumbleweed Pokémon, but it finally happened with Scarlet and Violet. It’s a Ghost type too, which matches perfectly with the concept of dying, rolling foliage. Plus, it’s a perfect pairing for the Let’s Go mechanic, which is how you’ll evolve Bramblin into Brambleghast.

In the same vein, we never got a hot pepper Pokémon until Scarlet and Violet. Capsakid almost looks like a baby chick, but its evolution Scovillain is unmistakable. Scovillain is also Pokémon’s first dual Grass/Fire type, since it’s such a spicy plant.

You can find Foongus and Amoongus throughout Scarlet and Violet, but their Paradox form is what makes the list for us. It’s a Grass/Dark type (there are two more of those on this list), as demonstrated by its mushroom shape, leafy overhangs, and intimidating stare.

Leafeon has been a fan favorite ever since it was introduced in Gen 4, and it’s just as graceful now. If you’re comparing it to other Eeveelutions in Scarlet and Violet, it’s not the most viable, but on its own, it stands tall among Grass-type Pokémon.

We couldn’t make this list without including Gen 9’s Grass starter. Sprigatito is great against the Water types you’ll encounter in Paldea’s early provinces, and the same goes for its first evolution Floragato. By the time it grows up to be a Meowscarada, it’s added a secondary Dark typing that makes it even more competitive in battle.

What’s not to love about Smoliv? The little anxiety-ridden olive has been a fan favorite ever since it was first revealed. It joins Capsakid as another Pokémon based on food, but its evolutionary line has a third step. After becoming a cluster of olives called Dolliv, it finally becomes a full-on tree by the name of Arboliva. Our little olive gets so much more calm and graceful as it grows up.

On paper, you might not think of this duo as anything special, but they actually get some time in the spotlight in Scarlet and Violet. When you reach the town of Artazon, you’ll have to complete the Sunflora Hide-and-Seek Gym Challenge before you can battle Brassius. As the name implies, you’ll be searching all over town to find the smiling sunflowers.

Not only are these two some of the best shiny Pokémon in Scarlet and Violet, but they’re also some of the best Grass types. Given that they look like Tentacool and Tentacruel, you might find that odd, but they are definitely grassy in Paldea. That’s because they’re walking toadstools instead of swimming jellyfish.

Listed right after Toedscool and Toedcruel in the Paldean Pokédex is Tropius. There are a few different Grass/Flying types out there, but only one of them is a magnificent flying banana tree that also looks like a dinosaur. If we get more Paradox forms via DLC, Tropius would be a great candidate.

Our final Grass type is another dual Dark type, and it’s also the only Legendary on this list. Wo-Chien is one of the four Treasures of Ruin, each of which represents a feeling of humanity. Wo-Chien is the embodiment of grudges, which makes it quite intimidating.