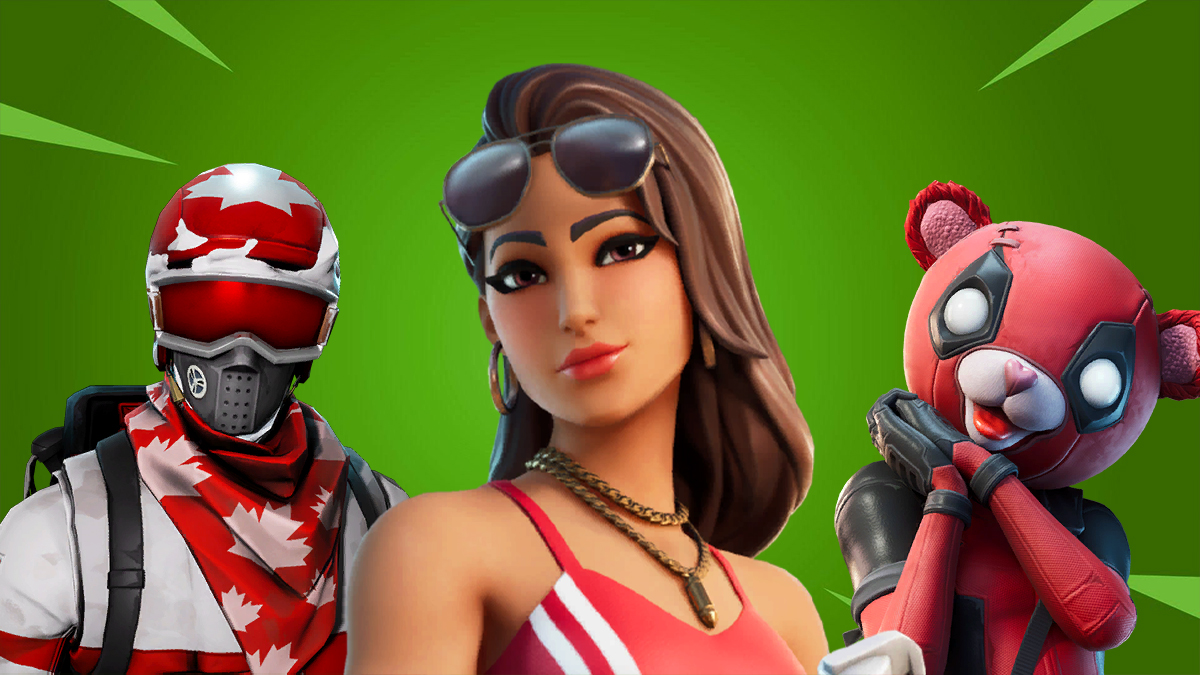 Red is an intimidating color, and if that’s the vibe you want to give off in Fortnite, then consider wearing a red skin into battle. We’ve gathered a list of some of the best ones here, presented in alphabetical order. Just be careful if Fortnite ever drops a fighting bull onto the island.

Before we get too deep into the fantasy and sci-fi stuff, let’s start this list with something practical. The Winter Ski Set includes outfits from all over the world, and those who want to show their Canadian pride can rock an outfit emblazoned with red maple leaves.

Not every Fortnite skin needs to be super aggressive or edgy. Sometimes you just want a super chill beach look, and that’s exactly what Boardwalk Ruby brings to the table. It looks quite comfy.

Candyman’s name might make you think of the horror movies, but in this case, he’s literally a man made of boxes of Valentine’s Day candy. Red-colored jammies for the winter holidays are a bit basic sometimes, so anyone looking to celebrate the day of love can pull off this look.

Narrowing down all the superheroes and supervillains for this list is difficult, but there’s only one red bad guy who should make the cut. Carnage is the most 90s Spider-Man enemy imaginable, with all the edginess of Venom cranked up to 11. You can embrace that same spirit in Fortnite by cosplaying as him.

While we’re on an edgelord kick, let’s talk about Cloaked Shadow. If you want to roleplay as a Nazgûl from Lord of the Rings, this is your best bet. As cliche as this look may be, the shadowy wings and horns do look pretty dope.

Deadpool is red already, but that would’ve been too easy to include on this list. Mashing him up with Cuddle Team Leader was an inspired choice, as Deadpool’s violent tendencies make for a funny contrast to the huggable bear face. You still shouldn’t get too close though.

Beyond the Deadpool mashup, there’s really only one choice for a red-clad comic book hero here. Daredevil has rocked a red-on-red look since day one. If you pick up a Grappler, then you can really live out the superhero fantasy, swinging around just like Matt Murdock does with his grappling cane.

Epic Games might be based in the United States, but Fortnite is for everyone all across the world. El Chapulín Colorado (“the Red Grasshopper” in English) is a great reminder of that. In a game full of hardcore heroes, we also get this parody, created by the late, great Mexican comedian Chespirito.

What is it about flaming skulls and three-piece suits that just go together so perfectly? Fortnite hit upon a perfect combination with Inferno, a fiery representation of a cutthroat businessman. He and Cloaked Shadow should have a battle to see who’s the bigger edgelord.

The Sith Trooper joined Fortnite in celebration of Star Wars Episode IX: The Rise of Skywalker. It’s not the only time we’ve seen Stormtroopers in the game: Darth Vader was flanked by them when he invaded the island. But there’s something much more intimidating about seeing a red one run up on you, blaster at the ready.