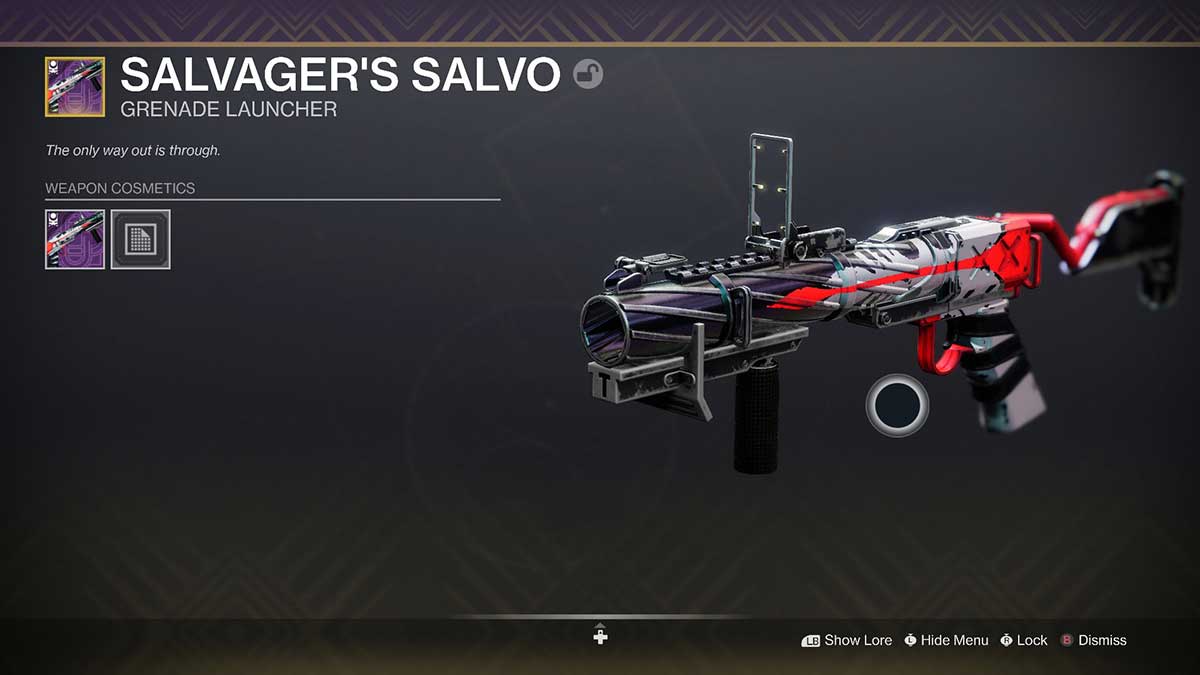 Salvager’s Salvo is the pinnacle weapon for Destiny 2’s Season of the Chosen. It’s a fairly powerful grenade launcher that you can pick up if you’re willing to grind out the grenade launcher kills. However, it’s the Ornaments for this weapon that make it shine. In this guide, we’ll give you some tips on how to earn the Pyretic Ornament by completing the Crucible Salvager quest as fast as possible.

You can pick this quest up from Lord Shaxx. If you can’t see it, make sure you check his second inventory screen on the right. The quest asks two things of you.

If you normally don’t spend too much time in the Crucible, this might seem like a daunting task.

This first part of the quest is probably the most challenging. You need to accurately land 30 grenade launcher shots on enemy players and have them die as a result. This is not made easier because grenade launchers are the most unwieldy weapons in Destiny 2.

To even have a chance of getting through this quickly, you need to equip two grenade launchers. Our loadout consisted of Salvager’s Salvo and The Colony. We recommend that you use The Colony if possible, too – its projectiles actively seek out enemies, almost guaranteeing your kills.

Once your loadout is set, pick up all the Crucible bounties you can carry, select a playlist, and get comfortable.

Focus on getting your grenade launcher kills as soon as possible. Salvager’s Salvo works best if you can judge its velocity correctly. Getting the right lob on a shot will make a world of difference between landing a hit or not. Alternatively, get close to an enemy player and shoot them at close range. This will kill you too, but it’ll register as a grenade launcher kill.

With The Colony or another grenade launcher in your Power Weapon slot, you need to be making the most of it as possible. This means identifying where the heavy ammo is and collecting it as soon as you can. The Colony can help you rack up two kills with every three shots if you land them correctly.

This might mean working against the objective of the match from time to time. However, if you want to get those kills, you need that ammo. Keep pushing for kills like this, and eventually, you’ll pick up the 30 you need.

Valor is the reputation you earn from completing Crucible matches. Whether you win or lose, you’ll earn Valor. You also earn it by completing bounties for Lord Shaxx.

While you’ll probably earn all the Valor you need when trying to get 30 grenade launcher kills, it definitely doesn’t hurt to complete as many bounties as possible. Iron Banner bounties deliver a hefty chunk of Valor, so working through them every time they come up will push you through this quest even faster.

Wins obviously add more Valor than losses. With this in mind, pick a game mode that you’re good at. If you win more often than not in Control matches, then sit in the Control playlist.

Once you’ve earned all the Volor ranks you need and have spent hours missing shots in the Crucible, you’ll be able to pick up Pyretic from Lord Shaxx. While it doesn’t look as good as Toxicity, it’s still a great-looking Ornament to run around with.

We completed this quest in about four hours while an Iron Banner event was on. With eight Crucible bounties and one Iron Banner bounty complete, we managed to generate enough Valor and grenade launcher kills to earn this Ornament without much stress. You should be able to as well.