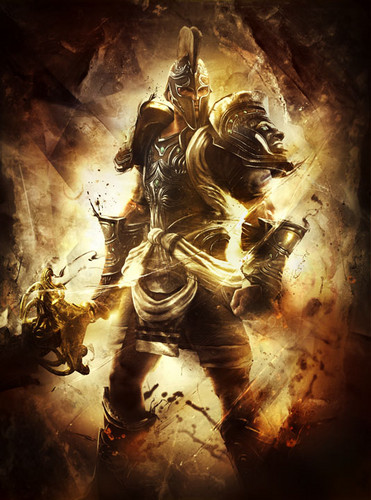 Among the many collectibles in God of War are Legendary Chests. Unlike Nornir Chests, they do not require any special tricks to open them. They can contain some pretty valuable items, including armor pieces, upgrade materials, and runes to enchant your weapons with. Legendary Chests can be identified by the golden light streaming out of their lid. This guide will show you where to find them.

This guide is a work in progress and will be updated as new Legendary Chests are discovered. Be sure to check back regularly.

1. This first Legendary Chest is just on the right side of the path you take upon first leaving Kratos’ home. It holds a Light Runic Attack Gem, Hel’s Touch.

2. This Legendary Chest is located in the Witch’s Cave found by jumping over a few gaps and holds a Heavy Runic Attack Gem, Ivaldi’s Anvil.

3. After returning to the Witch’s Cave, Atreus can solve a sand bowl rune puzzle to lower the platform and allow access to this Legendary Chest. It holds Runic Summon, Murder of Crows.

4. Just to the left of the Witch’s House is a sand bowl puzzle. You can see the runes from the ledge to the left. Climb up the chain and walk to the end of the path so that Atreus can see the solution. It contains a Runic Summon, Storm of the Elks.

5. In the Witch’s Cave near the sand bowl puzzle. It’s locked behind a door requiring Winds of Hel Energy to be brought over from the opposite side of the cave. Holds a Light Attack Rune for the blades.

1. After defeating a Soul Eater during the Favor quest for Brok, you’ll see this Legendary Chest in the same room. It holds a Light Runic Attack Gem, Fury of the Ice Troll.

1. After climbing up and defeating a couple of wolves, you can get to this Legendary Chest by destroying the left poison generator by throwing your axe at the red container. Then freeze the remaining poison generator to reach the chest and get a Light Runic Attack Gem, Charge of the White Bear.

2. On the path just before one of Odin’s Hidden Chambers, it is locked behind a door requiring Wind of Hel Energy which you can find along the left path behind some poison and roots that need to be burned away.

2. Inside the room with the wheel that rotates the light tangles in the Light Elf Sanctuary.

3. Once the rune is solved and you head down below the Lake of Light, in the room to your back right, solve the light tangle puzzle to reach the chest with a Heavy Runic Attack Gem, Thiazi’s Talon.

4. Inside the Lake of Light, after fighting several dark elfs and an Ancient. Holds a Light Runic Attack Gem, Njord’s Tempest.

5. On the way out of the ringed temple after activating the main light. Holds a Light Runic Attack Gem, Strike of the Utgard.

1. Inside Tyr’s Vault. The door opens after you retrieve the Black Rune.

2. At the bottom of the ring around the temple locked by roots that need to be burned. Contains a rare blades pommel.

1. In the giant claw room, bring in the mine cart and position it to get up to where the rock is trapping the cable. It’s on the left. Holds a Runic Summon, Falcon’s Dive.

2. After leaving Sindri’s shop after the dragon fight, in the tunnel on the right. Holds a Light Runic Attack Gem, Tyr’s Revenge.

1. At the very top, holds a Runic Summon, Bitter Squirrel.

1. It’s just sitting inside the final storeroom on the right and holds a Light Runic Attack Gem, Wrath of the Frost Ancient.

1. Climb to the very top and ride the rope down from inside the shipwreck. Holds Ymir’s Breath, a rare pommel.

1. Behind the rune door. Holds a Heavy Runic Attack Gem, Mists of Helheim.

1. At the top where you once fought a battle behind a gate that is now open.

2. At the bottom near a wheel that you have to unlock first by clearing out vines.

1. In the room with the traveler, pull out the rock and climb it, then rotate the wooden shard that is hanging from the ceiling in order to climb over.

1. Just to the left of the first barricade that you have to burn away.

2. At the very first gate down the stairs is a tomb that must be opened by bringing Winds of Hel Energy all the way back to it.

3. After removing the obstacle keeping your ship from floating higher, use the lift on the inside to go up a level and then climb back down in order to pass underneath it to find this chest. Holds a Light Runic Attack Gem, Icarus Storm.

4. It’s just underneath the main bridge near the Hidden Chamber of Odin and behind some world of tree sap.

Cliffs of the Raven Legendary Chests

1. Inside the enclosure down at the beach. You will need to bring Wind of Hel Energy down from up above to unlock it.

1. Inside the area behind the rune protected gate, after fighting a troll and unlocking the door. Contains a Light Runic Attack Gem, Leviathan’s Wake

1. Next to the reaver ship behind a gate. Destroy the branches on the right so that Atreus can get in and open it for Kratos.

1. On the east side of the island covered in roots that must be burned off.

2. Locked inside a small tomb on the western beach. The video above shows how to get it open.

1. Sitting on a grassy ledge on your way out of the stronghold.

With all these Legendary Chests collected, Kratos and Atreus should be very well equipped. If you’re looking for other collectibles, be sure to check out our God of War Guide Hub.