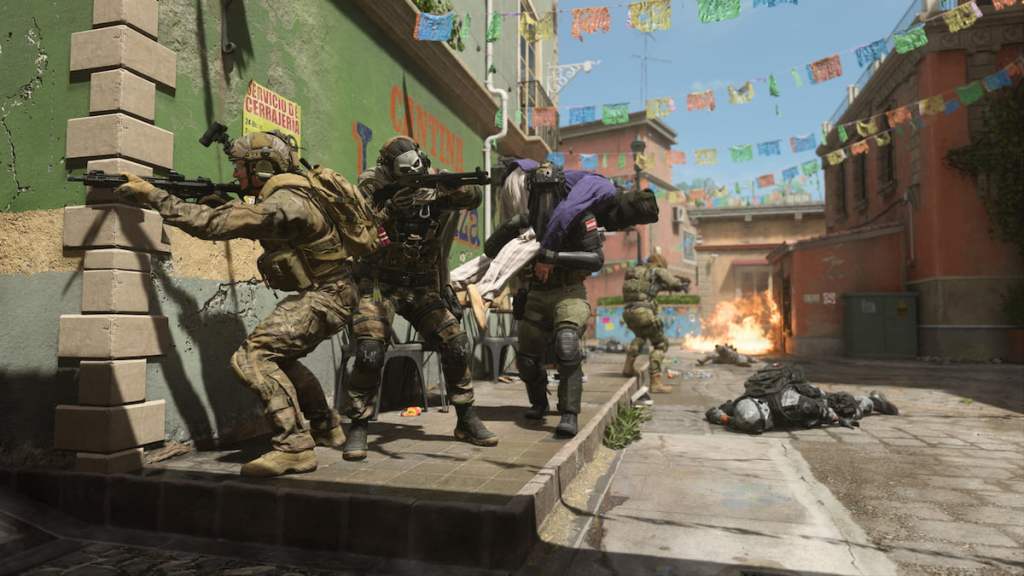 From the opening moments of your first match, it will become apparent that Call of Duty: Modern Warfare 2 is not just a revamped model of the series’ typical product. The franchise has long been prideful of its arcade-style gameplay with a grand hook to make players feel like super soldiers with unfathomable speed and lock-on aim. For the first time in series history, the latest entry shuns this concept entirely in order to morph into a gritty, tactical shooter that holds only remnants of its predecessors’ features to prove it is a mainline title. As a result, the final product is a delightful change of pace that comes at the cost of the franchise’s most beloved and simplistic qualities.

Gameplay built for the strategic and patient

Those who have wanted Call of Duty to be grounded in reality will be pleased with Modern Warfare 2’s adjustments to the standard gameplay mechanics. The most noticeable change can be discovered during gunfights. Whether you are wielding a newly-unlocked pistol or an SMG with several attachments, every gun has a chance to outmatch your opponent’s. This is mainly due to weapons having truer-to-life bullet damage compared to previous games, as anything from one headshot or a couple of shots to the body can swiftly take down any player. The focus on realism even seeps into player movement. Compared to 2019’s Modern Warfare, you are not as light on your feet, and additional weight will be tacked on once an assortment of weapon attachments is applied.

These may sound like minor tweaks, but their effects deeply impact how players go about each match. With movement being slowed, aggressive gunners become much easier to catch, while those sitting in nooks and crannies can take advantage of the low times-to-kill and wait for enemies to pass through. This ultimately results in games being played with a degree of strategy that longtime veterans will not be accustomed to, as the gameplay changes encourage checking each corner and using vantage points methodically. Although a far departure from its predecessor, outwitting opponents and working thoroughly with teammates was truly more rewarding than imagined. Admittedly, there were times I simply desired to rush to opposite ends of maps. The initial outcomes were certainly not kind, but I eventually solved where enemies were likely to await me in later matches.

For better or worse, every weapon in the multiplayer has an array of realistic behaviors. It is a pleasant surprise to unlock a fresh, new gun and discover the feel of its handling and the sounds from its muzzle being widely different from the 54 others. To stumble on such a level of detail fed my interest to level up and experience the rest of the game’s arsenal. That said, the characteristics they emulate of their real-life counterparts do dampen the fun. Several base weapons have incredibly rampant gun kick and sluggish aim-down-sights times, so much so that no particular batch of attachments can make them feel powerful. They still serve singular purposes, achieving eliminations from specific ranges, but grinding through weapon levels in the hopes of having an all-around powerhouse can leave you disappointed.

For almost two decades, Call of Duty has relied on longstanding modes such as Domination, Team Deathmatch, and Search and Destroy to keep fans entertained. Although they continue to hold up and blend well with this tactical style of gameplay, Modern Warfare 2 is the first title in a long while that shines brightest with its new and reworked modes. For one, Ground War has taken a massive step forward, providing 64-player battlefields with a diverse selection of tanks, cars, helicopters, and boats. What impressed me the most is the detail put into each of its five massive maps. This includes standout Sariff Bay, an expansive seaside location that provides players the opportunity to swim and stealthy play in its waters or spot enemies from one of the many rooftops in its downtown. Altogether, the mode gives players a sense of freedom that is rare to find in most current-gen first-person shooters.

There are even a pair of captivating, new game modes for 6v6 play — those being Prisoner Rescue and Knock Out. Similar to Search and Destroy, both are round-based and disable respawns, though they lend twists that uniquely separate them from the pack. Prisoner Rescue tasks teams with either protecting or capturing two hostages each round and pulling off these feats then turn into points. Meanwhile, Knock Out takes a simpler approach, only requiring each squad to hold a bag of cash placed at the center of the map for 75 seconds to secure a round win. Both modes speed up the pace of play, as each highlights the objectives at all times to bring teams together for hectic shootouts. Most importantly, all players can be revived by teammates at least once, so expect these bombastic battles to go on for a lengthy period of time.

Currently, each of the standard game modes are home to just 10 maps. It is undoubtedly a small amount, though it is difficult to take issue with when each has a defining individual trait that makes you eager to jump in it dozens of times over. Zarqwa Hydroelectric is a prime example, a desert location that features open and secret water tunnels players can swim through to traverse the map undetected. Crown Raceway has also seemed to already gather a cult following. It is set in the center of an F1 raceway and holds a maze of wonderfully designed buildings that span from garages, eateries, to even lounges. There is no map that lacks in size either, as each one lends room for weapons of all ranges to succeed.

Fixing what was never broken

The only major gripe I have with the multiplayer can be found outside of combat, as its UI attempts to be as complicated as possible. The revamped Gunsmith and progression system’s menus are the biggest culprits of all. Modern Warfare 2 partially forgoes the traditional weapon unlock method of having to progress your overall rank in favor of the newly-introduced Weapon Platforms. These take the shapes of progression trees which task you with leveling up guns in a particular order in return for new ones.

Although confusing, it is not a terrible way of pushing players to use each weapon offered, especially as attachments can be shared between those in each platform. However, with attachments entwined in this system, you have to dig through a variety of progression trees and menus in order to understand their unlock method. To make matters worse, some attachments don’t even have their methods detailed at all. In sum, while a unique system, solving what needs to be unlocked next is a frustrating, time-consuming process that has me questioning why the system was ever introduced.

Perks have also returned in the sequel, though with an overhaul to how they are chosen. The multiplayer grants players and their custom loadouts the option to sport four at a time with Perk Packages. The packages consist of two Base Perks, one Bonus Perk, and an Ultimate Perk — the latter being home to the best possible abilities. However, there is a catch. Players will have to earn their Bonus and Ultimate Perk by either obtaining eliminations and objectives or waiting up to four minutes for them to kick in. Although the thought of bearing four perks first had me worried, it gives players a chance to restore what has been taken from the core gameplay, whether that be the ability to have additional speed or reduced damage from explosives. It is also worth noting that the perks are also perfectly sorted so that no one Perk Package can make a player overpowered.

I will confess that with each Call of Duty that releases, I reminisce over those that were proceeded (yes, even Ghosts). It is a force of habit for hardcore fans that see one of their favorite franchises change. For the sake of this feature, I went back to 2019’s Modern Warfare and now can confidently say that developer Infinity Ward has far surpassed its own talents since then. The latest installment is void of impactful bugs, aside from the rare framerate drop on Ground War maps, the designs brought to new modes and maps are the best at launch in years, and the selection of weapons should make both newcomers and veterans very satisfied.

Despite its overly complex and lackluster progression system, Modern Warfare 2’s multiplayer is still very much worth exploring. Its strong emphasis on realism is definitely unexpected, but the gripping, tactical gameplay it supplies makes for exhilarating matches that you can trust will never turn dull. Even if its seasonal format does not provide content that lives up to expectations, the online component has more than enough quality features to keep you glued for countless action-packed hours.