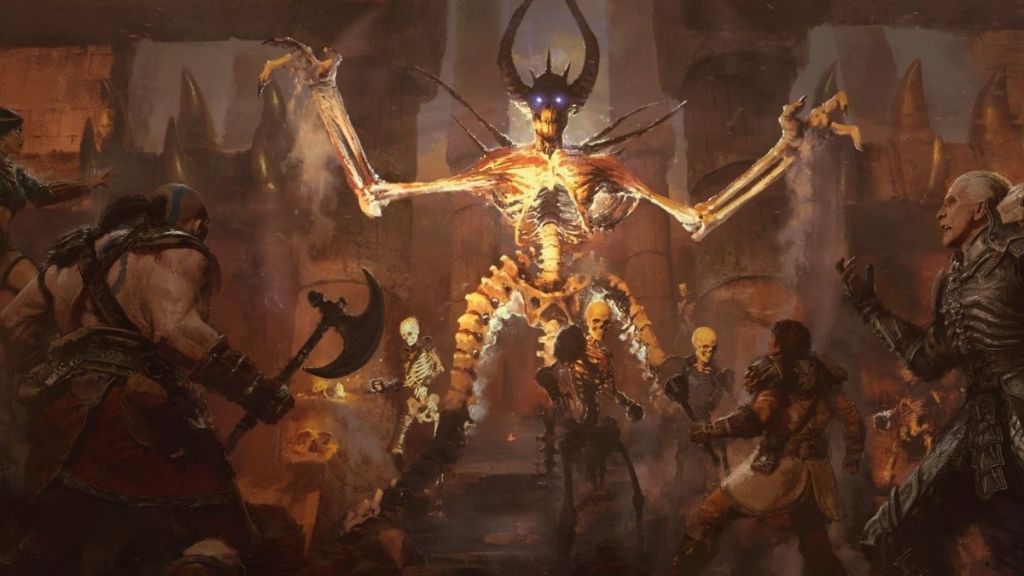 In Act III of Diablo II: Resurrected, players face off against the eldest Prime Evil himself: Mephisto, Lord of Hatred. Despite being the “weakest” of the Prime Evils, he is a master magician and still can blow away any careless player who steps too close to one of his magical attacks. From Travincal to the Council of Zakarum, Mephisto’s keen corruption has led the entire area to ruin, putting up a protective, malevolent guard around Act IV’s Pandemonium Fortress. Knowing that, how does one prepare to fight off against the grandfather of mankind?

You can find Mephisto in the third level of the Durance of Hell. You access the Mephisto’s lair by destroying the Compelling Orb in Travincal, which opens a portal to his hideout. Just like many lairs, his is winding and complicated, so just in case you die, make sure to get all the waypoints along the way.

Mephisto’s final lair is a grouping of four final rooms: a center room with a fountain of blood, two side rooms with corrupt Zakarum council members, and a back room that holds Mephisto himself. The front three rooms will have a host of tainted officials, while the back will randomly spawn restless spirits.

Playing much like an ultra-powerful demonic mage, Mephisto employs a handful of powerful abilities based on lightning, poison, cold, and magic damage. The attacks you should be most concerned about are his Charged Bolt, Poison Nova, Frost Nova, and a large, spherical, white magic missile that can take out a mercenary hireling in one hit.

Unlike Andariel or Duriel, getting close to Mephisto is key. While his Nova attacks are still a danger, Mephisto’s melee attack is weak and he doesn’t respond well to being closed in on. You can cope with the damage by using anti-cold or lightning potions, as well as resistant gear. Moreover, while all boss battles should require a good stock of potions, Nightmare and Hell level Mephisto makes them vital. After all, he becomes more and more immune to life and mana leech, meaning you can’t rely on stealing his health to survive (looking at you, Barbarians).

When it comes to positioning your fights with Mephisto, the system is pretty simple. Walk into his back room, get his attention, and then back up into the center or side rooms. Why? Because if you stay in the back rooms, he will sporadically summon restless spirits that are hard to hit and get in the way. In the other rooms, you can focus on fighting Mephisto by himself.

If you want to be cheeky, though, you sometimes can lure Mephisto into the central room and get him stuck on the fountain of blood. This leaves the eldest Prime Evil a sitting duck for you to crush in a flurry of (likely ranged, as to not “un-stick” him) blows.