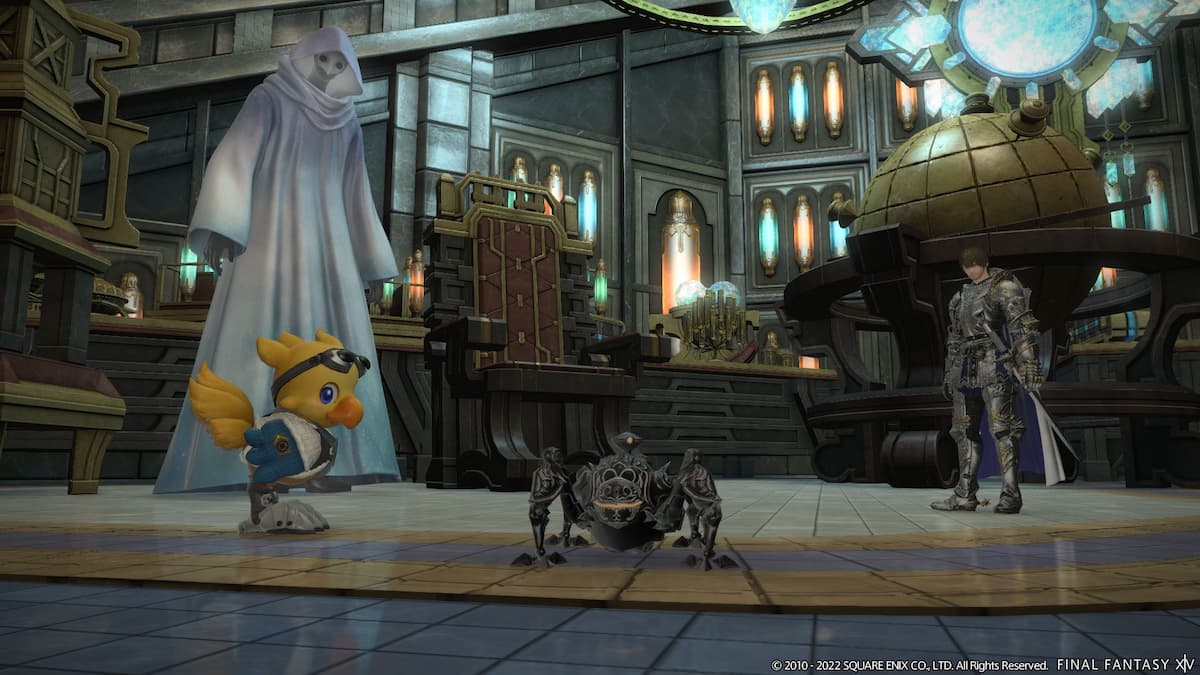 When we last saw our favorite Chocobo Alpha in Final Fantasy XIV, he and his miniature Omega minion had returned from their adventures to help the Warrior of Light create the Ragnarok ship that would lead us to victory against the Final Days. During our time in the Endwalker zone Ultima Thul, we saw the remnants of Omega’s world, hinting that the story started in Stormblood may not have been as wrapped up as we thought. The quest A Heartless Hypothesis will reunite you with Alpha on a new journey called Omega: Beyond the Rift to discover secrets about the nature of artificial life and free thought.

Where to start the A Heartless Hypothesis quest

You can find a Bespectacled Technician NPC at X:10.9 Y:14.3 in Old Sharlayan provided you are on a level 90 character and have completed the necessary prerequisite story quests. She will offer you the A Heartless Hypothesis quest and tell you to meet her at X:13.5 Y:27.2 in the Ragnarok hangar of Labyrinthos.

There, you reunite with your Ironwork friends and find out that Omega transferred its consciousness into the mini omega minion upon its defeat. It now has no more combat capabilities than an infant and wants to learn why its creations were affected by Dynamis during the Final Days.

You are teleported to Radz-at-Han and escort Omega to the Kama area to ask questions of the townsfolk. You then speak with Djinabaha at X:8.1 Y:13.4. He sends you on an errand that has you speak with Nashvan at X:10.0 Y:13.4 to start the next quest.

Omega will then offer the Goodbye, Σ◡|◡|△ follow-up quest and teleport you to Camp Broken Glass in Garlemald. Speak with the designated people in the camp and then talk to Omega and Alpha at X:14.8 Y:30.1. After warming Omega up, you head to Victor’s Spoils at X:33.2 Y:25.3 and speak to Omega again to have a conversation with Manius.

Related: When will the Omega: Beyond the Rift side quest story be available in Final Fantasy XIV? Answered

You are then ported to Beastways Burrow on Mare Lamentorum. After a conversation with Growingway and an inspection of the grounds, you proceed outside to ride Argos to meet with the Watcher at The Nethergate. After a quick but important conversation, you all head back to Labyrinthos with the answers you need.

There, you have one last extremely heartwarming cutscene before Omega departs. You are then given the Flow Together Orchestration Roll as a reward.

Players looking to see more stories in Patch 6.15 can unlock the Arkasodara tribe quests and the custom delivery NPC Ameliance Leveilleur, as well as continue the Hildibrand and Tataru’s Grand Endeavor storylines.