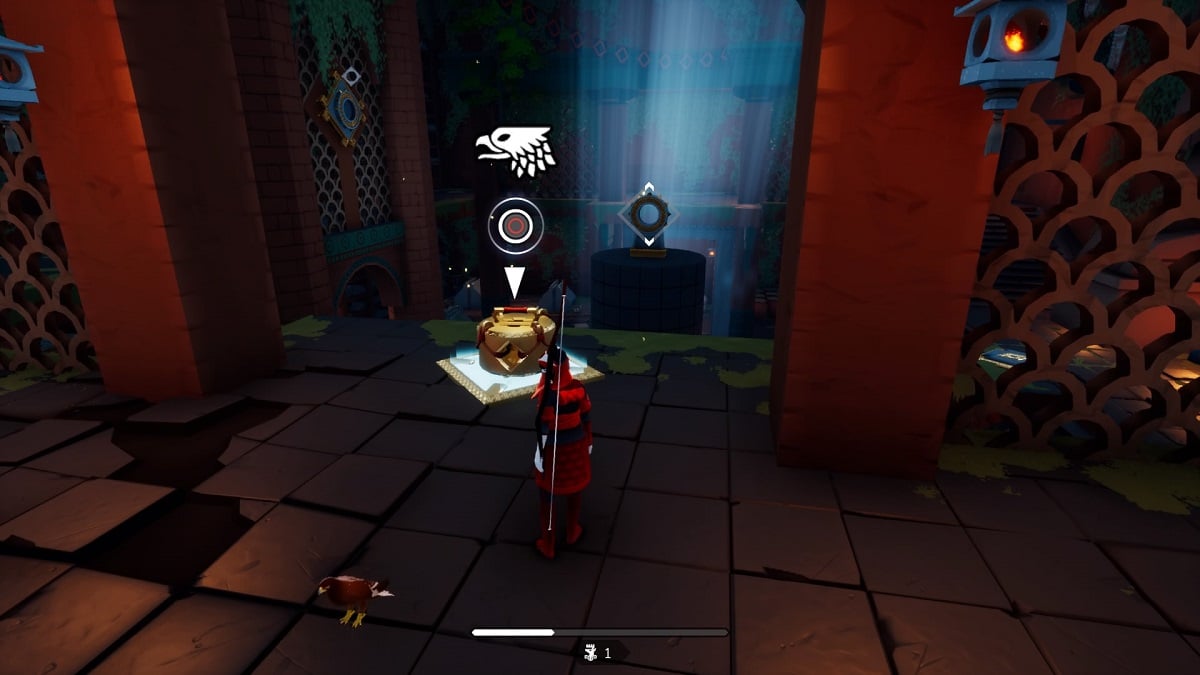 The monastery puzzle is an optional side quest in The Pathless. You don’t have to solve it to beat the game but, if you want to get more crystals to earn more falcon flaps, you will want to beat it. The puzzle can be found during the Cernos chapter, and you will need to locate it using your spirit mask.

Be on the lookout for the building in the image above. Head inside using your falcon’s flap ability, or by climbing the walls next to it. Head into the building with no locked gates at its entrance. Once inside, fire an arrow through the circular target in the center of the room. It will glide into another target, and unlock a gate with a movable block inside. Command your falcon to grab it. Head up the stairs to the right and tell your falcon to place it on the pressure pad.

Push a lever next to the first target to raise it. Fly up to the right and land on the platform above. Go into a small side room and look down. Use your spirit mask to see a movable block in the room below. Drop down and command your falcon to grab it. Shoot the talisman to unlock the gate and head into the main room.

Drop the block and fly up to the platform above. Command your falcon to grab the block again and drop it onto the pressure pad in front of you. This will release a talisman you can shoot on the wall, which will lift a gate with another block behind it. Tell your falcon to put that block on one of the two pressure pads below.

Fly back up to grab the first block. Carry it down to a pressure pad with a grate in front of it. Drop it on the pad and shoot the talisman that opens behind the grate. Head through the gate that opens and press another lever. Grab the block for the final time, and place it on the second pad in the main room. The targets will now be lined up. Fire an arrow through all three to release the crystal and earn a bronze PlayStation 4 trophy for your collection.