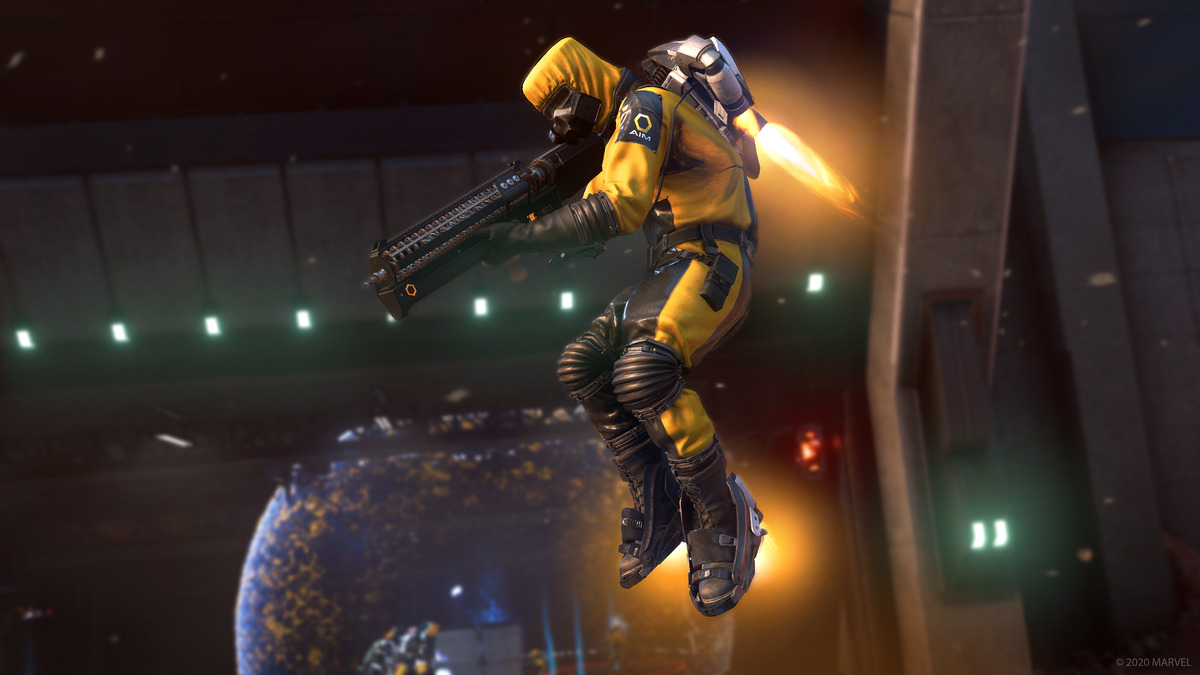 The open levels in Marvel’s Avengers will provide you with a number of opportunities outside of the main quest — there are AIM prisoners to rescue, strongboxes to open, and loot shacks to break into. These loot depots aren’t exactly the most difficult brainteasers, but it may be unclear how to open these doors at first. Once you get the hang of it, you’ll be looting these stockpiles with no problem from here on out.

You’ll probably see your first AIM depot in the campaign mission Missing Links. Some of these bunkers will use floor switches that glow yellow. Step on one to turn it blue; there will usually be more than one floor switch, so walk over all of them, and once you do so, the switches will turn green and the door to the AIM depot will open. If you can’t find the panels, use Tactical Awareness by pressing up on the D-pad; you will see cables running from the door to the panels.

Near a locked AIM bunker door, you may find these strange yellow hexagonal stations. These are the switches for opening that door, and pelting them with attacks until they turn blue will activate them. There are usually four to a door, and Tactical Awareness can help you find just where they are. Outdoors, you may see one on each side of the door, and then two more above them on the second floor. Indoors, these switches are scattered about — go around the door to its left to find a switch on your right. Another is behind the loot room. The other two should be on the second floor above the door. After hitting all four, the blue will turn into a friendly green.

Some switches for opening doors require ranged attacks instead. In some instances, you may find two switches, one on each side right above the door to the loot depot. But in the large, open levels, you’ll usually find these round switches on towers adjacent to the depot. Sometimes, these towers will have just one switch for you to hit. But for the most part, these towers will be on the left of the depot and have four of these switches. Hit them from bottom to top — one in the front, one in the back first, then look in the middle section of the tower (they are divided into thirds by platforms) for a switch on the right to hit that. The last switch will be on the top part of the tower on the left side. The switches will turn from yellow to blue to green, and there will be a nice little chime when they turn green and open the door.

The most straightforward way of opening some of these doors is through hackable terminals. Simply go to the terminal, follow the button prompt (square on PlayStation or X on Xbox), and the door will open. However, players have found that only Iron Man and Black Widow are able to open these doors — probably because they’re the most tech-savvy Avengers. Other characters will just receive an “ACCESS DENIED” message, which can be frustrating if you’re playing as a different character in single-player.

These large and shattered doors are just asking to get busted open. As Hulk, Ms. Marvel, Thor, or Captain America, hold the Heavy Attack button and you’ll unleash a Power Attack that will break the door. Unfortunately, Iron Man and Black Widow have no native way of opening these doors. Iron Man does have a workaround for breaking open walls by using the Hulkbuster, but some would rather save that ability for combat instead.