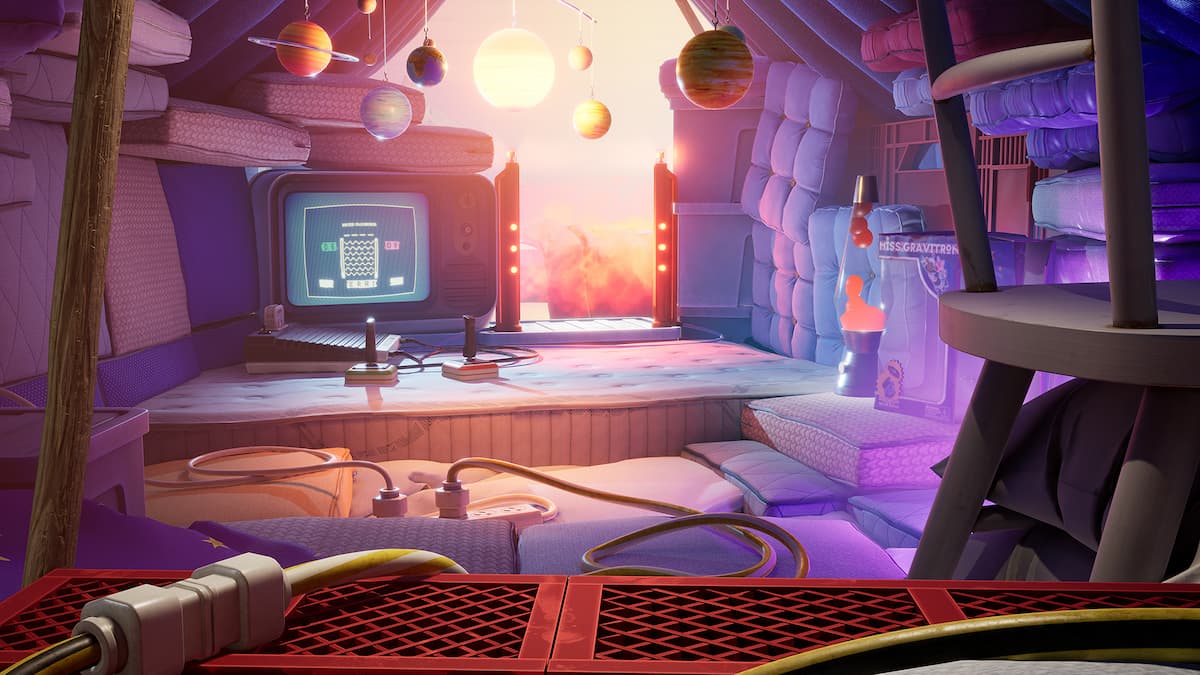 May and Cody are on a questionable mission — the two parents believe that getting their young daughter Rose to cry is the only way to turn them back human. They plan to “kill” Rose’s elephant queen toy, but the two will have to go through the labyrinth known as Rose’s Room to get all the way to the top of the shelf. The two will have cool powers, though — May can walk on walls or ceilings through special starry paths, while Cody can either grow or shrink in size on command. That’s just the start of it, however. This chapter has 10 segments, the largest story chapter in the game.

There are some goodies and interactive bits in the Pillow Fort, though this is mostly a transitional section. Look for the Plastic Prison Breakers achievement in this section, along with the Tank Brothers minigame. You will reach a classic video game console; take control of the joysticks and play these simple visual puzzles to advance to a space-themed section.

Rose’s toy Moon Baboon will try to throw a wrench in your plans, defending her after hearing your plans to make Rose cry. Catch up with him, but there are two gauntlets of puzzles to beat, and you’ll have help with your new powers: May’s ability to walk on walls and ceilings, and Cody’s ability to grow or shrink. Generally, look for paths with glowing stars on them that May can walk on, and Cody’s large size will come into use for large buttons and switches, or for anything that needs weight — similarly, only tiny Cody can fit through small holes.

To advance in this section, you’ll need to activate toy robots — May has to pull the lever, while tiny Cody has to fit inside to realign the battery into its proper position. Activate the first robot and float up an anti-gravity elevator to three portals. There will be two areas like this, each with three puzzles to solve to progress. These six puzzles will test your logic and problem solving with your gravity-defying and size-manipulating abilities.

Be sure to catch a portal to the Space Walk minigame before doing the first set of three puzzles; look in the middle of the space lift you used to get up to the three portals. For your reference, here are the first three puzzles in a nutshell:

Look for the Laser Tennis minigame before reaching the next three puzzles. The other three puzzles are as follows:

Turn both wheels after you finish the last three puzzles. Complete a pipe puzzle with ground-pounding, and then prepare to challenge Moon Baboon to a boss fight.

How to defeat Space Baboon in It Takes Two

The gist of the Moon Baboon boss fight is standing on buttons to raise up his power cores, while the other player leads his lasers to destroy his own cores. After destroying his laser gun, jump on his homing missiles and ride them with flight controls towards his ship. Cody will then shrink and platform to destroy his ship, but make haste — May has to survive a laser hell.

After this, May will control Moon Baboon’s ship while Cody controls the laser and radar; the May player should use Cody’s screen as reference to find Moon Baboon.

The mission to assassinate an elephant doll is now clear. Before undergoing some platforming with number blocks, find the Rodeo minigame and the A Daring Devil achievement with a toy car. Then, a challenging coordination puzzle will have one player grind on rails, while the other player stands on animal-labeled buttons to make way for the other player. Screen looking is recommended here, although the player on rails can also just call out which animal is obstructing them.

Don’t forget to find the Feed the Reptile minigame behind the abacus. Bounce up some platforms and team up for some childish school activities. Subsequent puzzles involve a marble maze, quick wall-jumping, propelling each other with whoopie cushions, and gliding through a difficult obstacle course with fidget spinners. The finale of this long segment will take place in a trippy kaleidoscope.

You need to make way for a hand cart, so complete this Train Station set by placing townspeople figurines in the correct spots. Place the railway worker on the gear, two halves of a couple on the larger red circle to have them kiss, and the conductor in the stall, which is opened by the couple. The hand cart will then be able to pass.

One player will control a large green dinosaur acting as a crane, guiding the smaller red dinosaur through what is basically a platforming section without jumping. Instead, the red anklo can ground pound instead to activate switches. These will move the platforms up and down and left and right, while also switching which side the handles for the green dinosaur is on. One essential tip: remember that the green dinosaur can hold on to handles to prevent them from switching sides, even when the red dinosaur hits the switch. Don’t forget about the Snackosaurus achievement while you have both dinosaurs.

Work together to control a paddleboat; to turn right, the player on the left side of the boat should paddle more, and vice versa. Run in opposite directions for sharper turns. To defeat the Giant Octopus boss, make sure you shoot the tentacles as self-defense before focusing on the octopus itself. This entire section is an exercise in coordination and prioritization.

Hopefully, circuses don’t creep you out. Puzzles include moving a marble with hamster wheels, shooting a player out of a cannon to hit targets (remember that the player shot out can control their trajectory), riding a unicycle on a tightrope (don’t pedal too slowly or too quickly), and a trapeze that will involve coordination for both players to pass the marble to each other.

Once Upon a Time

Explore the town before entering the castle — nab the On Rails Experience achievement and the Birdstar minigame before breaching the gate with a bowling wrecking ball.

Storm the castle with your new magical powers. Cody has ice mage abilities: a freeze attack to hit enemies and freeze lava to make platforms, a teleport for getting past bars, and a long range ice attack. May has a fire sword with a standard slash attack and a dash ability that can get her across gaps. There are three boss or boss-like sections here:

Retrieve an escaping elephant queen with a claw machine. Drop the claw where the queen is about to run to. Then, murder this innocent plush and feel bad about yourself.