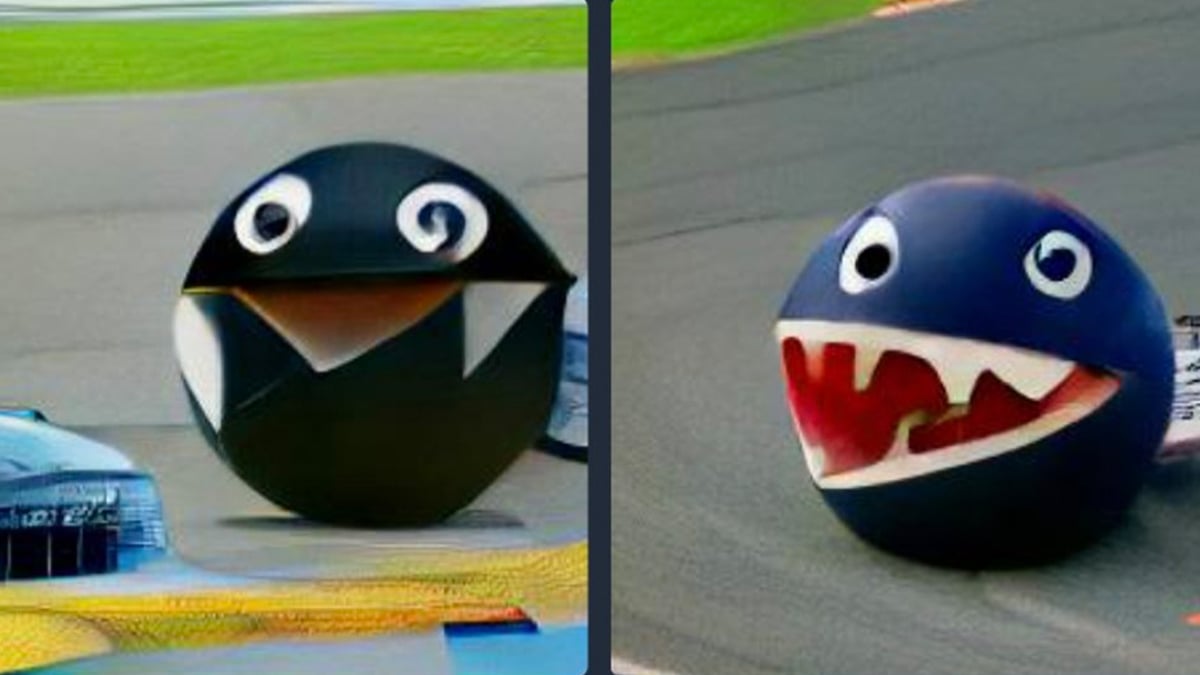 Dall-E Mini has taken the internet by storm. The AI art generator can take any prompt you give it and create something new. It’s not always pretty, but it is often quite creative — and the meme potential is off the charts.

We visited the Weird Dall-E subreddit to find the best and funniest examples of what people have created with the AI program. You can find our favorites below, then head to the forum to see even more examples. Visit the Dall-E website to try out your own ideas too.

Giuseppe Arcimboldo was an artist known for painting portraits where the person’s face was constructed out of things like fruits, vegetables, and other plants. Wario’s bulbous nose would probably be a strawberry if this were a real painting. It’s an inspired idea from lolainslackss.

Chain Chomp at a NASCAR Race

Is NASCAR the closest thing the real world has to Mario Kart? Maybe, at least until Super Nintendo World opens at Universal Studios Hollywood. A Chain Chomp dashing across the track is funny enough on its own, but the derpy face in the results are equal parts hilarious and adorable. Nice work, essenger.

Ballz0fSteel noticed that Fortnite promo art sometimes looks like band members posing and decided to combine that with metal album covers. The results oddly look like Mortal Kombat characters in a few places, and every would-be band name is just as unreadable as actual black metal logos.

Someone had to do it, and llamango was that someone. What’s funny is how Dall-E seems to treat green and black as ‘gamer colors.’ You can make out what is probably meant to be the Razer logo on a few of these, so look out for that April Fool’s Day product in the future.

AspenGoat had the dignity to at least give gamers a toilet, which incorporates the back and shoulder padding we’re accustomed to seeing on gamer chairs. Somehow these results also generated what appear to be two very normal toilets. Maybe they play the Super Mario pipe sound when they flush?

These little fluffy friends from muzuka are giving the Chain Chomp a run for its money in the cute department. The idea of creating headsets appropriately sized for household pets is hilarious, and it looks like a few of them even got to try the PSVR2 before the rest of us.

Jabba the Hutt in Animal Crossing

Imagine opening up your island and having this big boy show up. One of the funniest parts of this creation from Thechizz2 is how Jabba seems to be having a normal conversation with the villagers in a few screenshots. One thing’s for sure: Jabba and Tom Nook would not get along.

Pokémon X and Y’s Kalos region is based on France, so this idea from zRedHawkz just makes sense. Good luck trying to guess what Napoleon’s actual Pokémon lineup is though — is that a bipedal Eevee or a demonic Pikachu in the center? Scarlet and Violet’s Lechonk would be a perfect choice for the Frenchman’s team though.

Bloober Team Silent Hill remake rumors aren’t slowing down, but TheUnhappyClown decided to take matters into their own hands. McDonald’s fast food joints are everywhere, so it just makes sense that it would have a franchise in Silent Hill. You definitely don’t want to meet this version of Ronald McDonald.

A Toaster in Breath of the Wild

Finally, we have this goofy idea from amitgeva. Dall-E interpreted the toaster in a few ways, including turning it into a backpack for Link. Considering all the cooking he does in Breath of the Wild, toasting up bread would be a godsend. Too bad we have to wait until next spring to see if he’ll get any new culinary tools in Breath of the Wild 2.