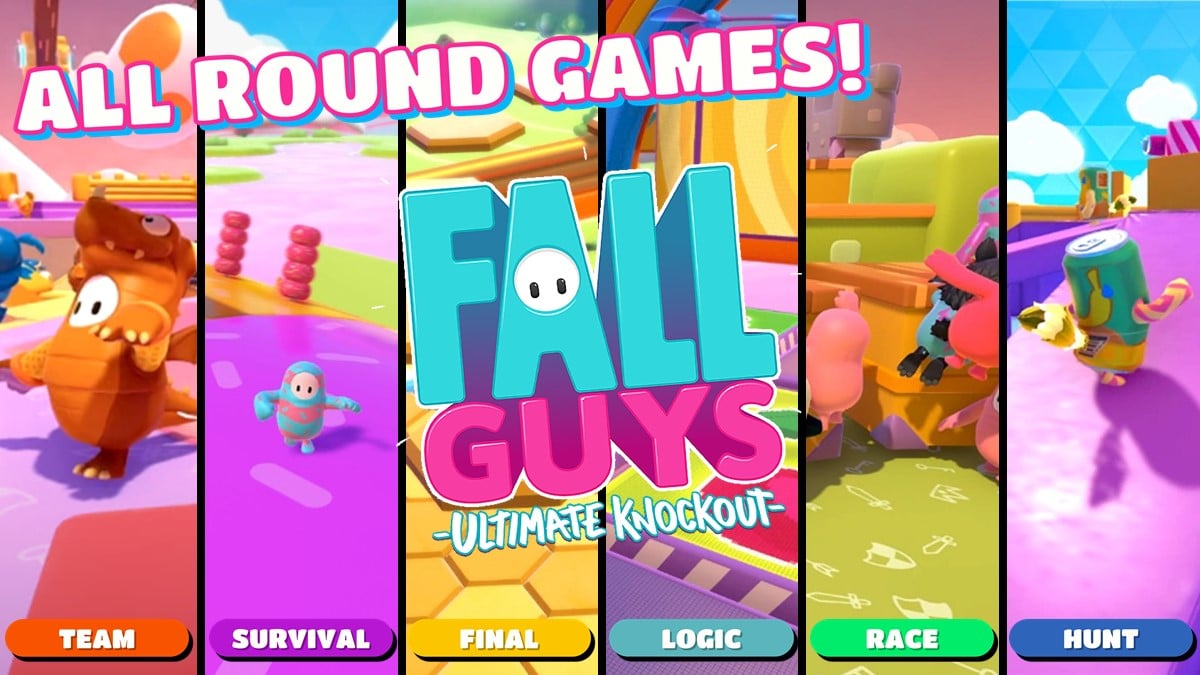 Fall Guys: Ultimate Knockout took the world by storm with its unique take on the battle royale genre. One of the qualities that set it apart from its major competitors is that each “show” filled up with 60 players at the start is actually an amalgamation of smaller games called Round Games.

Round Games come in six different varieties: Race, Hunt, Survival, Logic, Team, and Final. Often, the team and final games would also fit into another category, but due to ‘team’ or ‘final’ being their most standout quality, they are not organized this way.

Here are all 66 Round Games currently featured in Fall Guys: Ultimate Knockout.

Race games are the most common type of game and the only type that shows up until the final round in Gauntlet Showdown. Many race maps have variants called Gauntlet Remixes, in which select obstacles in the map have been changed. To qualify for a race, most of the time, you must make it to the finish line within a certain set number of players allowed to qualify that round.

Related: How to survive Slime Climb in Fall Guys

Unlike the race mode, Survival games usually have a set number of players that will be eliminated, instead of a set number who will qualify, or it ends after a certain amount of time, in which all players can qualify if all players survive. It’s extremely beneficial to get good at this game mode, as half of the Final games would be in the survival category if they were not final games.

Out of all of the basic round types, Hunt games might be the most cutthroat. It’s every player for themselves in that, if you win, you usually took that shot of winning away very directly from another player. There aren’t currently many hunt games directly in the hunt category, though more games in the Team and Final category would fit under this subject.

Logic games are a bit of an outlier — test your memory and thinking skills, and very often, all players will make it through. This is because there are many challenges in logic games, and if everyone completes them, no one is eliminated in that round.

Team games are unique in that you are suddenly working with players you’ve been playing against for the rest of the show. Some of these games would fall into other categories outside of the team label, like hunt or race, while others can’t really be categorized. That said, there is not currently a survival-style team game. The poorest performing/losing team is eliminated, everyone else is safe.

Related: How to use the golden 5-point bonuses in Fall Guys team games

Every Fall Guys show ends with one of the six Final games. These games are unique in that, while once in a blue moon, there can be a tie; generally, Final games only have one winner. In a survival-type Final round, players will be eliminated until only one is left. In a race, only first place gets the crown. In a hunt, only the best hunter gets the win. Here is where legends are born.

Related: How to win the Final Round in Fall Guys

These are all the round games currently out in Fall Guys. New round games will be added in the future, and this article will be updated accordingly when the time comes.