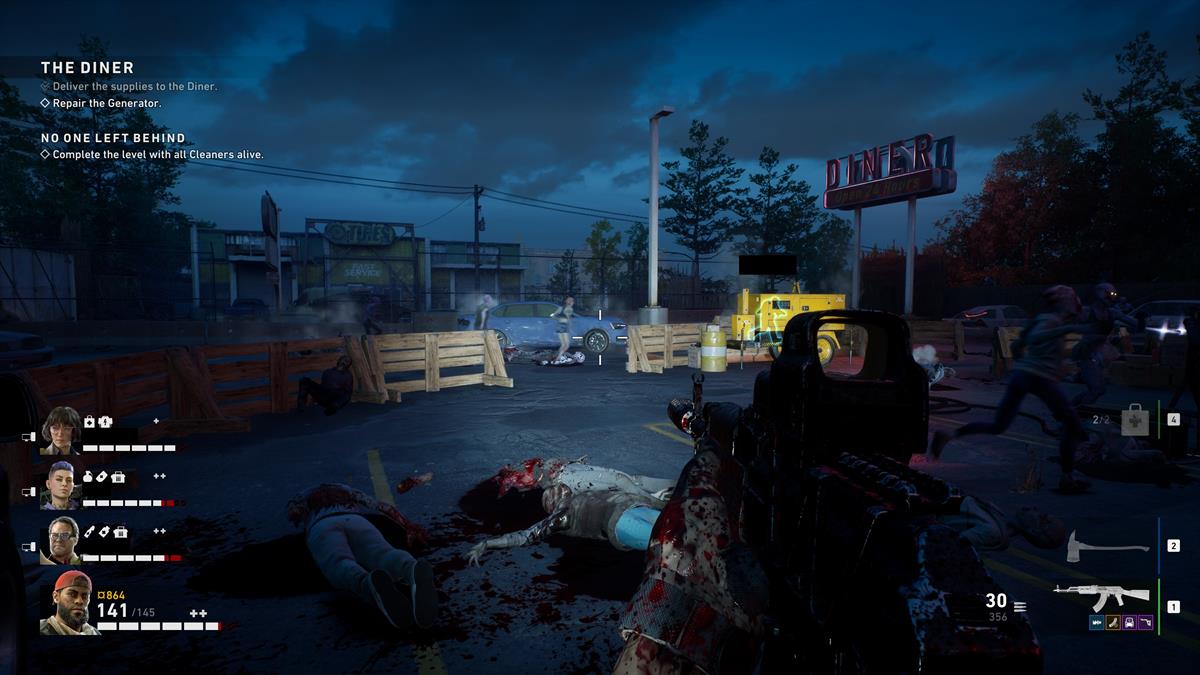 Back 4 Blood has eight playable characters, out of which four are available when you start the game, and the rest can be unlocked. Given the card/deck-building system, any character can remain viable. However, there are a few abilities and perks that each character has by default, and some of these are absolutely necessary. Here’s our Back 4 Blood tier list to determine the best characters in the game.

Our Back 4 Blood tier list is primarily based on mission runs on higher difficulties (i.e., Veteran or Nightmare). Likewise, it bears mentioning that all characters are flexible enough, but their own perks might pigeonhole them into specific roles. As such, if someone already excels in a particular role, then their counterpart might be ranked lower.

Saying that Mom is a lifesaver is an understatement. The additional support inventory slot and extra lives for teammates mean that she can keep everyone in tip-top shape. The free and instant revive is also a clutch skill that can save you from team wipes on higher difficulties. You can learn more in our Mom best cards and build guide.

It’s easy to say that Hoffman is a mandatory pick if you’re trying tougher challenges. He basically gives everyone a lot of ammo. Considering that the game throws multiple elites and bosses your way, you’re going to need a lot of bullets. You can learn more in our Hoffman best cards and build guide.

Karlee is pretty much invaluable when playing on higher difficulties. She can warn your squad when there are mutated Ridden nearby, allowing your team to prepare. Likewise, her boost to team use speed means that you can apply bandages and interact with various items a lot faster. This includes repeated runs to farm Supply Points in one particular mission. Lastly, having an extra quick inventory slot allows her to bring an additional stun gun or defibrillator. You can learn more in our Karlee best cards and build guide.

Evangelo’s perk is a more useful variant of the Breakout card. This is a godsend on higher difficulties since the Director likes to spam special infected on a whim. He’s also got some decent boons, such as increased movement speed for the team and an innate boost to his stamina regeneration. He can be one of the speediest characters in the game. Moreover, even without Holly’s perks, Evangelo remains a great choice for melee-focused builds. However, thanks to mobility and stamina regeneration, he offers more flexibility. You can learn more in our Evangelo best cards and build guide.

Similar to Mom, Doc fills that ideal spot as a squad’s dedicated medic. However, this doesn’t mean that you should ignore her if a teammate already chose Mom. These two can actually be thought of as Back 4 Blood’s dynamic duo, thanks to their healing capabilities. Doc just happens to rank a bit lower since her perks, while amazing in their own right, aren’t necessarily noticeable in clutch situations. You can learn more in our Doc best cards and build guide.

Jim’s Seasoned Hunter perk is something you’ll want when up against special infected and bosses. By shooting their weak spots, you can bring them down a lot faster. His Clean Kill perk, meanwhile, makes him one of the deadliest characters in the game. The only downside is that keeping stacks high by avoiding damage can be a nuisance when there are too many mobs to deal with. Even if you managed to get it up to 50%, you could lose it the moment you get hit just when you need to snipe a boss. You can learn more in our Jim best cards and build guide.

Holly is an absolute monster in melee combat. Her perks give her increased resistance, and she gains extra stamina when she kills foes. She can reliably complete most missions without ever using a firearm as she’s just relying on spiked bat swings or machete slashes. The problem is that, on higher difficulties, this is an extremely risky playstyle, and mistakes will absolutely punish you. You can learn more in our Holly best cards and build guide.

Walker suffers from “beginner-friendly character syndrome.” Being one of the most straightforward characters in the game, he doesn’t really offer a lot in utility or survivability. Model Soldier is great, sure, but the rest of his abilities and perks are negligible in the long run when compared to what others bring to the table.