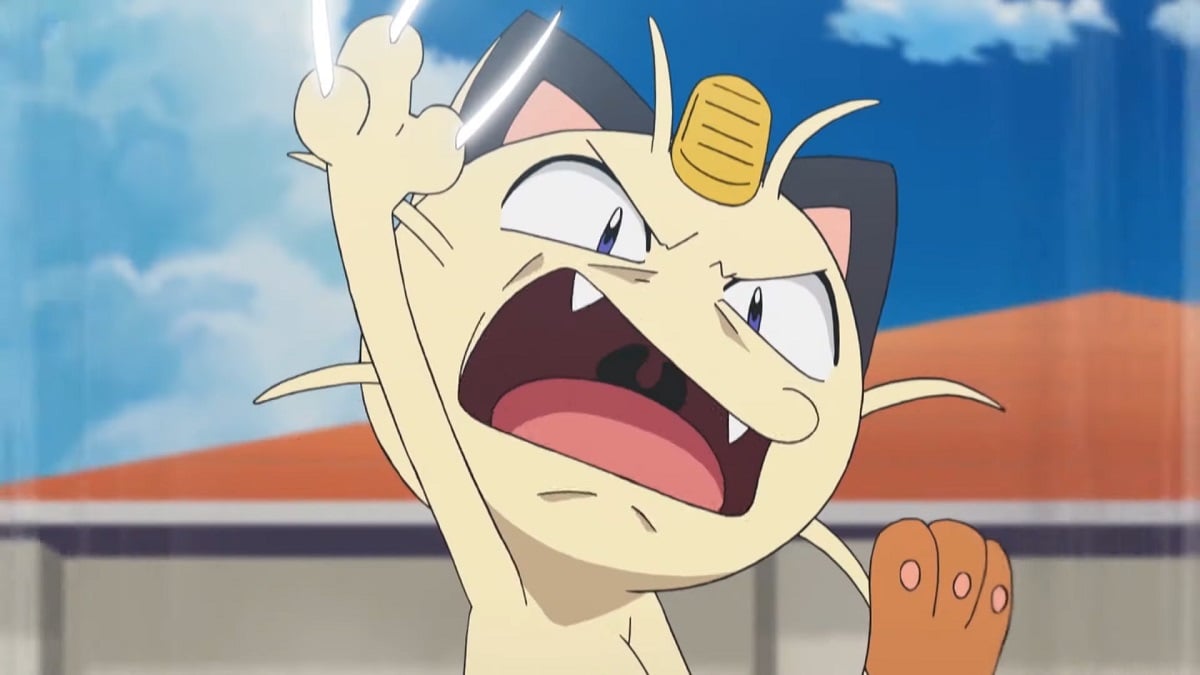 Feline Pokémon have been in the series since the series began on February 27, 1996, and many varieties have appeared in the games since. We have included all the Pokémon with cat-like features and will be ranking them from best to worst. We’ll be grading them on cuteness and handiness in battle — but mostly cuteness, to be completely honest with you.

Shinx is one of the first Pokémon you’ll discover in Gen 4 (Pokémon Diamond & Pearl). It’s absolutely adorable with its black and blue fur, cheerful eyes, and yellow starred tail. It’s also useful in the early game as it provides electric attacks and paralysis moves against your foes. Shinx also has a terrific ability called Guts. This little guy’s Attack goes up by 50% while having a status ailment like poison, paralysis, or burn. While Shinx is super cute, some of the fairy types are even better.

Meowth is the cat that started it all. He’s a popular character in the animated show, providing comic relief alongside Jessie and James. The Pokémon itself can be quite cute around others of its species and humans. “It loves to collect shiny things,” says the Pokédex in Pokémon Sword & Shield. “If it’s in a good mood, it might even let its Trainer have a look at its hoard of treasures.”

As soon as the starter Pokémon were revealed for Pokémon Scarlet and Violet, our direct attention turned towards Sprigatito. It’s an adorable grass-type Pokémon that’s only just a little over one inch and is nine pounds, according to the Pokémon Database. It has an uplifting smile and looks so happy to be around its friends and trainer. We think it’s one of the cutest Pokémon in existence and it hasn’t even come out yet. We can’t wait to train it this November.

For a long time, we thought Raikou was a dog, but after closer inspection, it certainly has a cat-like appearance. This legendary Pokémon moves at the speed of sound as in Pokémon Gold & Silver, he ran away from the battle towards another city in an instant on the map. It has magnificent electrical powers and a high-speed rate in its attributes. It has cool spiked whiskers, a cute blue lightning-shaped tail, and sharp feline-like claws.

One of the many Eeveelutions that actually looks like a cat, Espeon is a psychic type that has a two-pronged tail. In fact, the tips of the tail help it predict the opponent’s next move, according to the Pokédex in Pokémon Crystal. We just want to pet its adorable purple fur.

The first evolution of Shinx, Luxio, is still adorable but it looks a little angrier than before. It’s starting to grow a mane, and while it always looks upset, it has a cute little red nose. Luxio also majorly helps in battle with its Rivalry ability, which improves its damage against the same gender. This makes it better than most other electric types.

Talking about powerful Pokémon, Solgaleo is a fierce cat in any arena. Evolved from Cosmog, this psychic/steel type sends out energetic light that “radiates boundlessly,” according to the Pokédex in Pokémon Shield. The lion-like form of Solgaleo just shows its mighty strength and ferocity. There is next to no cuteness as it seems angry all the time, but it is certainly powerful.

Luxray is Luxio’s evolution, and it looks even angrier than before. Its eyes tell a tragic story as they’re devoid of positivity. Its hair reflects the electric energy kept inside it as it’s flared up like Goku’s Super Saiyan form in Dragon Ball Z. It also has the Rivalry ability, just like Luxio, so it will be even more effective in battle.

Another electric cat, Zeraora, was the last Pokémon to appear in the Pokédex in Ultra Sun and Moon. It stands on two feet and has a cool superhero-like design with its patterned fur. We also like the blue lighting whiskers on the face. It also sounds badass and surprisingly dark for a series like this; according to the Pokédex in Ultra Sun, it “electrifies its claws and tears its opponents apart with them.”

This feisty cat is the evolved form of the starter Litten that’s available in Pokémon Sun & Moon. Acting as the predecessor to the mighty Incineroar, it offers up an ability called Blaze, which improves its fire damage by 50% when it’s low on health. It also has a little bell around its neck, creating a collar-like look.

While its pupils are a strange mix of black and red, Litten makes for an absolutely adorable starter Pokémon. After being defeated by Torracat, it adorably licks its master’s face, letting him know that it’s okay. This feline eventually evolves into Incineroar, one of the strongest Pokémon in the Alola region.

While not as iconic as its earlier form Meowth, Persian is fondly remembered as being Giovanni’s main pet in Team Rocket. While effective in battle with a strong Speed stat, the Pokémon is known as a bad pet as it’s mean to its owner. “It is tough to raise as a pet because of its fickle meanness,” says the Pokédex from Red & Blue. Gold also says that “it will lash out and scratch for little reason.”

With a sweet smile and shining eyes, Delcatty is a wonderful cat companion to have around in your party. It also has a neat ability called Wonder Skin, which halves the accuracy of status moves by default.

Standing at one foot, this little puffball is absolutely endearing until you realize how tragic of a life it lives. It keeps the same blank and somewhat creepy stare as it contains the psychic power within it. Despite this sad element of the pocket monster, it is helpful in battle as it has the Own Tempo ability, which makes Espurr impervious to being confused.

Meowstic is what happens when the once-kind Espurr lets loose its power. It’s a powerful psychic user that, according to the Pokémon X Pokédex, “when in danger, [..] raises its ears and releases enough psychic power to grind a 10-ton truck into dust.” Both the male and female versions have different colored fur.

Purrloin is such a cute Pokémon that it gets away with thieving people just because of its appearance. It’s relatively low on all its stats, making it one of the weaker cat Pokémon in the series. Purrloins are quite mean as well. “Their cute act is a ruse,” says the Pokédex in Pokémon Black & White 2. “They trick people and steal their valuables just to see the looks on their faces.”

Liepard is the evolved form of Purrloin and is more successful at being stealthier than its predecessor. It’s still relatively low in all of its stats, but its major plus is its high speed in battle. It has long yellow whiskers and strange triangles on its fur.

Weighing almost nine pounds, this cat has an astonishing swishy tail that reaches above the top of its noggin. It has an odd face with an almost sinister set of eyes staring back at you. If you care about accuracy, Glameow has the Keen Eye ability, which makes moves that lower their accuracy null and void.

Skitty is a Gen 3 Pokémon that is present within 20 versions of the series since it debuted. This little feline is established as a bit of a klutz within multiple Pokédex entries as it gets distracted easily by objects and makes itself dizzy in excitement. The overall form of the cat seems unnatural, and the pins coming out of the tail is ghastly, making it lower on the list.

This is the part of the list when the cat Pokémon take a turn for the worst. This evolved form of Glameow always gives nasty stares toward its foes, and its whiskers are obnoxiously large. Despite its large size, its speed is surprisingly high. It may also be helpful in battle against fire and ice-types as its ability Thick Fat brings down the damage of their attacks by 50%.

Perrserker is a unique evolution from the Galarian version of Meowth, and it looks like it’s trying to recover from a hangover. It is droopy orange eyes that you wouldn’t want to see around a back alley and a beard that desperately needs to be shaved. However, it does have high strength and defense rates, so it may be an asset in battle.

While researching for this article, we thought Pyroar wasn’t a real Pokémon. It has a strangely drawn mare of hair that looks like it’s from a wig shop, and the face seems structured like Arnold Schwarzenegger. The female version doesn’t fare much better as it has a long trail of hair behind it like a flame. However, it is very loyal to its pack and despite its strange appearance, it can put out a fiery breath that reaches above 10,000 degrees Fahrenheit, according to Pokémon Y’s Pokédex.

Litleo will be in our nightmares tonight. That blank stare from its eyes looks demented as he pounces on its prey. Everything else is cute about it like the little red mohawk and its paws, but those eyes will keep me up at night. On the other hand, it does have a great effect called Moxie, which increases its attack stat with each fainted opponent.