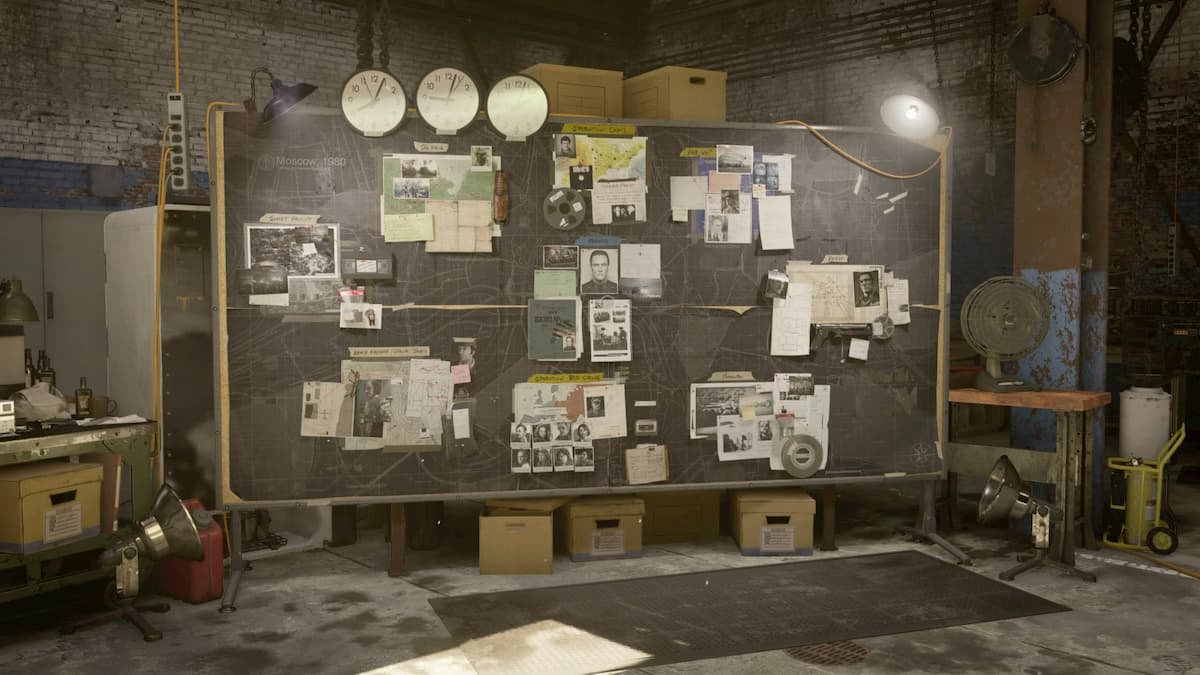 Almost every Call of Duty single-player campaign contains collectibles in the form of intel. However, Call of Duty: Black Ops Cold War from developer Treyarch added a sense of purpose to their collectibles. Evidence found through the story missions of Black Ops Cold War has a function in helping you solve mysteries behind the game’s side missions. Here’s where to find the six pieces of Evidence that help you complete Operation Red Circus and Operation Chaos.

Your first piece of Evidence doesn’t come from you finding a physical object, but rather through an interrogation. The opening mission has you chase down a character by the name of Qasim Javadi. Once you catch up to him on a rooftop, you can play good cop or bad cop. Don’t be keen on throwing him off the roof right away; you have to ask him the question: “Who’s Arash meeting with?” This will give you a coded message. Do with him whatever you want to afterward.

Brick in the Wall evidence

The Brick in the Wall mission has two pieces of Evidence to find. The first one is tied with the optional objective to find a captured informant by the name of Richter. Follow the objective waypoint to Richter and you’ll go down a basement. There are three inattentive guards (one who is straight-up sleeping) near the tied-up Richter. Off these three guards, and near Richter is a table with an audio reel on it.

The second piece of Evidence is in the home of Kraus. After sneaking past or tranquilizing his wife, you’ll have to go upstairs to find his briefcase for the main mission. Don’t be too in a hurry though — you’ll see the shadow of Kraus on the second floor, so wait until he’s gone to go up the stairs. He’ll come back eventually and you’ll have to hide. You can do so in his kid’s bedroom in the corner, but to the left of that bedroom is Kraus’s own bedroom. Inside the right side table drawer is the evidence you need.

There are six pieces of photo intel you can take for an optional objective in Redlight, Greenlight. If you take photos of three of these, you’ll unlock a piece of Evidence. The third photo scene is on the second floor of a bar in the Soviets’ fake 1980s American town. The notification for you finding Evidence may or may not pop up, but hit the pause menu to confirm whether or not it registered in your game.

Echoes of a Cold War evidence

After sniping and shooting your way into the command center of this familiar base, you’ll hear some sort of audio recording. Check the table in the center of the room and you’ll see a tape playing — it will be pretty difficult to miss. Nab it to get one step closer to solving Operation Red Circus.

The piece of Evidence in the Desperate Measures mission is a wily one. We found it in the Records room, but other accounts have placed this Evidence, which is a watch containing a dead drop list, in other areas of the KGB headquarters. Check the War Room and the Server Room as well. Do so while you’re in control of Belikov and before you successfully obtain a keycard. Otherwise, you may miss your opportunity to find the watch and you’ll have to start the mission all over again.