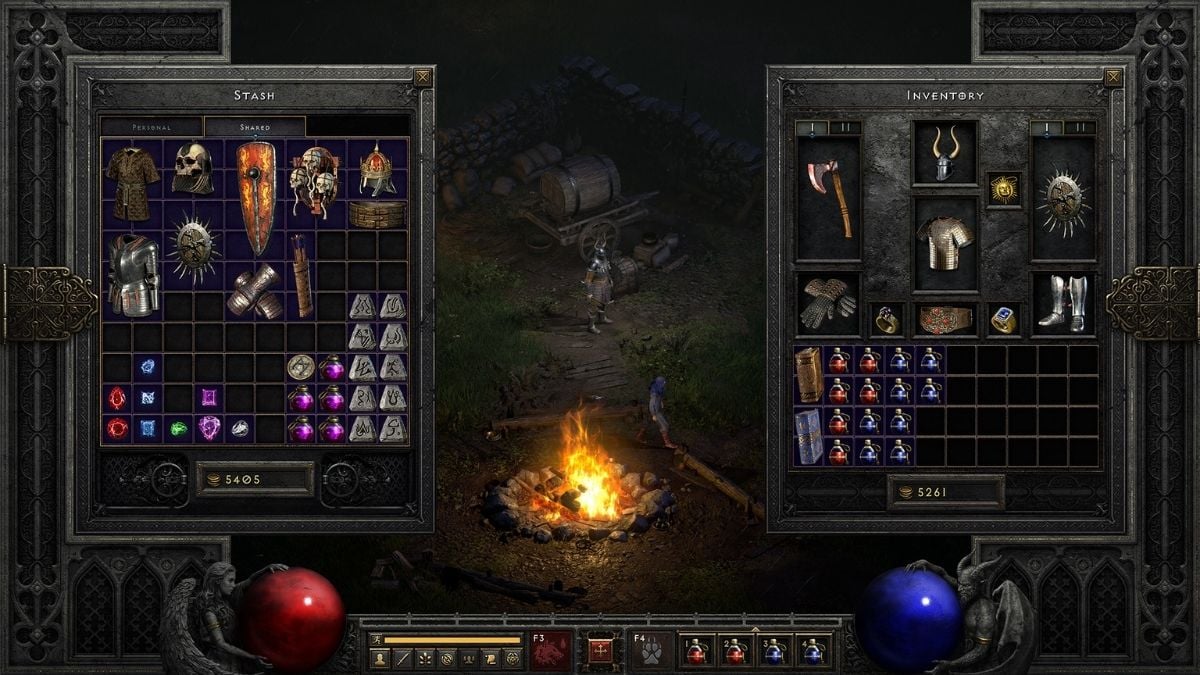 One of the hardest parts of Diablo II: Resurrected isn’t the monsters, or the complex builds, or even monitoring your mana levels. It’s your inventory.

The inventory in Diablo II is a measly 40 tiles, which may seem like enough until you consider most gear is at least three to four tiles large. Then you also need health and mana potions. Also, town portal and identification scrolls are vital ways to your survival and gear-finding abilities, so you also have to fit those in your pack. If you have four potions, four scrolls, and four spears (eight tiles each), that’s it, that’s your entire inventory. So, let’s make sure you make the most of it.

When it comes to scrolls, the easiest way to deal with the problem is to buy the Town Portal and Identification tomes sold by Akara. Together they do take up foud tiles, but you can put up to 20 scrolls in them, minimizing scrolls stress and putting them all in one place for easy use. Then, once you save everyone’s favorite NPC, Deckard Cain, you could hold off on identifying items until you get back to town and he’ll do it for free. That means you could get rid of the Identification tome and get two more tile spaces in your inventory.

Potions are vital to your health and safety, but enemies do drop them quite a bit. Try your best to not hoard them, only putting what you need in your belt slots to keep things organized. You can add a few extra in your inventory if you’re concerned about emergencies, but otherwise, keep your potions to a minimum.

As much fun as seeing near gear is, it is wildly important that you stay conservative about how much you actually pick up. Some great items are huge and bulky, so try to only keep the things you’re most interested in using or what will get you the most gold. If a wand is only 100 gold and made solely for Necromancers but you’re an Assassin, probably don’t keep it. The same goes for any item that is crude, low quality, or broken. They aren’t good to use and aren’t worth much money, so you’re just wasting space. As the game goes on, you eventually will probably disregard white (and even some blue) gear entirely.

Also, when it comes to charms, don’t overdo them. At least while you’re leveling. Just because you can carry 20 inventory charms doesn’t mean you should. If you love charms, stick to a handful of favorites.

You don’t get the Horadric Cube until the end of Act II, but this artifact is absolutely game-changing. It takes up a square of four tiles in your inventory, but it adds 12 tiles of its own storage. There’s a reason Diablo fans love this little cube.