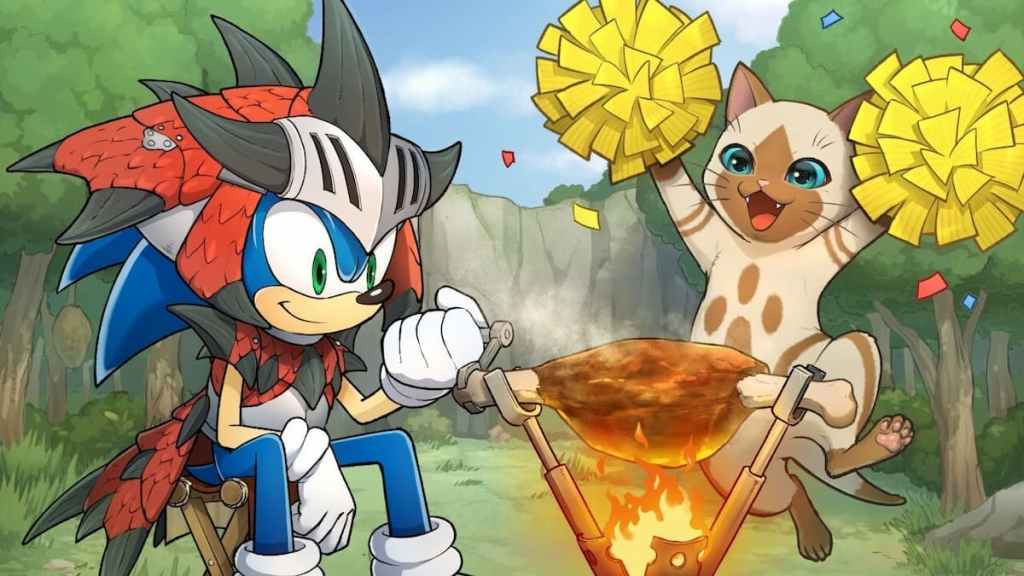 Sonic fans are a passionate bunch, to say the least. If you’ve ever Googled “your name plus ‘the hedgehog,'” then you already know — if you can think of it, Sonic fans have drawn it. That includes Sonic Frontiers fanart, and there are some truly impressive pieces out there. We’ve rounded up some of the best right here for your enjoyment.

We’ll start with this absolutely astounding piece by FerocitySHG, which shows Super Sonic going up against Giganto, the first Titan you take on in Frontiers. The rendering here is so slick it could be official art for the game.

Here’s another incredible illustration by Legitimategamerz, who copied the pose from Super Sonic’s debut in the Tokyo Game Show trailer. So much of the game revolves around unlocking Super Sonic, so it’s a great choice for fanart.

Sonic doesn’t go to the Starfall Islands alone in Frontiers: his longtime pals Tails, Amy, and Knuckles are there with him. PeachyOwlArt drew the gang together, and she even added Amy’s heart-shaped Memory Token as a nice touch.

Speaking of Amy, her cyberspace imprisonment reminded KitareHamakura of how Tikal was trapped inside the Master Emerald in Sonic Adventure. The result is this quick but funny comic riffing on the ladies’ two predicaments.

Not everyone on the Starfall Islands is friendly, of course. In fact, Sonic is hounded by Sage throughout his entire adventure. VictoryRina decided to draw up the villain in an even darker shade of red, giving her a pretty nasty stare in the process.

A few different artists got the idea to re-imagine Sonic Frontiers in the style of the original Sega Genesis games. We’ll start with this snazzy title screen by akanehedgehog. We can almost feel Sonic getting ready to wave his finger at us.

Artist miniluv73 drew up what one of those retro levels might actually look like. The full Sonic Frontiers UI is here, from Sonic’s stats, to the Skill Piece counter, to the speedometer, to the collection of rings, Chaos Emeralds, Vault Keys, and Memory Tokens. The crowd of Koco is a nice touch too.

Here we have another retro-tinged mock-up from KellyTheSeyky. This one actually predates all the others on this list: it shows Sonic running through the forest from the game’s first trailer. The UI here looks really good, and it gives us major Sonic Advance vibes.

Instead of going to a retro video game, SlySonic took inspiration from the early 90s TV show Adventures of Sonic the Hedgehog. Sonic looks just like his cartoon counterpart, and this version of Sage fits right in with the style. Now we want to hear what Jaleel White would sound like in Frontiers.

We’ll finish up with this piece by ShadowLifeman, which combines fanart with fan fiction. Lifeman’s piece imagines what a Phantom Sonic would look like in Frontiers. Phantom Copies first appear in Sonic Forces as evil clones of existing characters, but they could totally exist in Frontiers’ Cyberspace too.