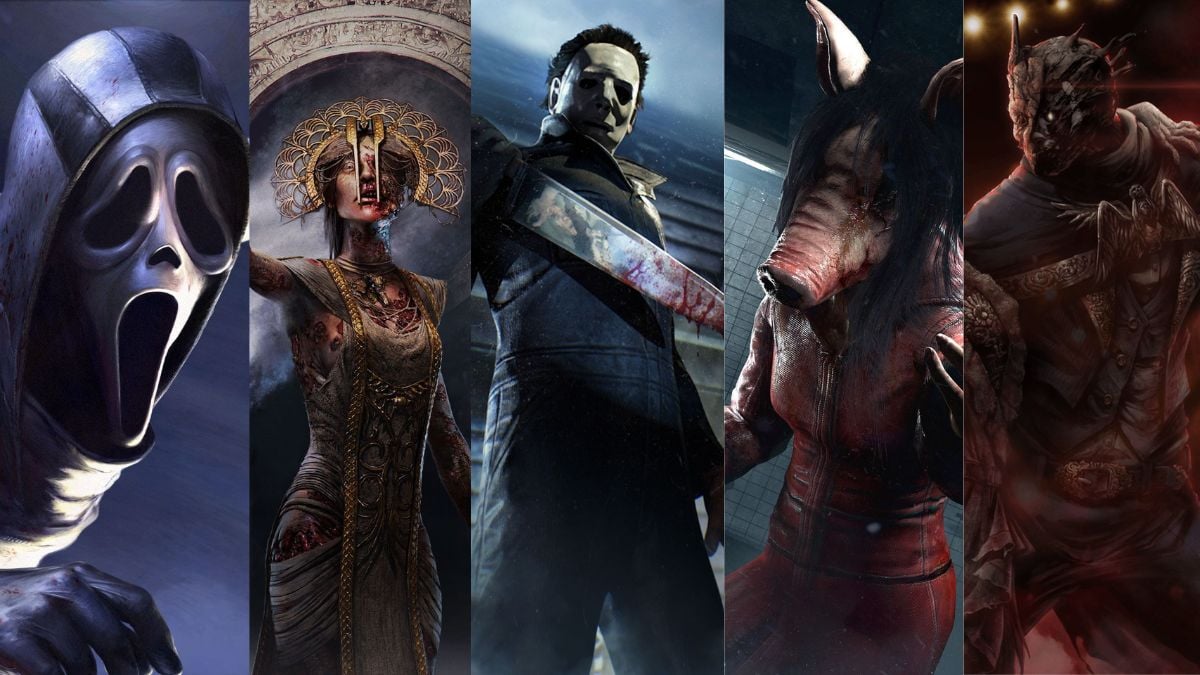 Half the fun of Dead by Daylight is the amazing Killers that chase you around every map. They’re characters full of personality and charm, but also quite a bit of spookiness. While they’re all fun in their own ways, some of these Killers strike fear into players’ hearts, and others just aren’t up to snuff. Let’s go on an adventure from the wimpiest to the scariest Killers in Dead by Daylight.

The Plague is a stunning figure. She’s a favorite of fan art and cosplays because of her golden disposition. However, despite the game artist’s best efforts, she simply isn’t as scary as the others. Yes, she is a literal plague beast with gruesome body sores and a deadly flail, but it isn’t enough to make her all that frightening. She’s more like a morbid work of art.

Inspired by the classic Nightmare on Elm Street film, Nightmare bares his claws every time you meet. Unfortunately for our beloved Freddy Krueger, he’s just not all that intimidating. It takes so long to make Survivors feel any sort of anxiety. Since he has to force them to fall asleep before he can even hit them, they know exactly what’s going on the entire time. A lot of the trepidation is sucked right out of the situation. He’s snooze-fest, not scary.

As a Killer, The Pig, AKA Amanda Young, isn’t all that strong. She relies a lot on her Reverse Bear Traps and surprising Survivors. But with her red jacket and literal pig’s head, sneaking up on them can be hard, and the Reverse Bear Traps are fairly easy to figure out. Mechanically she’s not very frightening, but also some fans just think she’s sorta adorable and silly.

A lot of the Killers in Dead by Daylight rely on their bizarre, inhuman shapes and sizes. It helps make them all the more frightening. Though a good Legion player can be a terrifying surprise, running down Survivors in a heartbeat, the design alone isn’t what’s scary. Under the mask, it’s very clear Legion is just, well, a guy (or gal). So, while a good Legion can be a terror, it can be hard to be scared of the Killer themselves.

Okay, let’s all be honest for a moment. Yes, The Wraith is a solid Killer. He’s powerful, mobile, and a serious threat to any Survivor. But when he bongs his little Wailing Bell, it doesn’t strike fear into everyone’s hearts. You run, but when it comes to seeing the Wraith’s face itself… He’s just kinda adorable. There’s a reason he’s one of the hottest romance options in the Dead by Daylight dating sim, Hooked on You. The guy even has romantic art, commissioned by Behaviour Interactive themselves. He can kill you, sure, but with those cute glowing eyes of his, he looks surprisingly charming the entire time.

No one is quite a jump-scare queen like the Hag. With her spooky, inhuman design, she’s a fright in-game. Many a Survivor can be thrown completely off-kilter if they run right into a Hag trap. While she is a strong killer, her fright factor can lose some of its luster if you aren’t very frightened by jump-scares. At the end of the day, Hag is undoubtedly one of the top scream queens in the game.

There are few things scarier to Dead by Daylight players than silent, unsettling stalking. They’re pretty used to keeping an ear out for threatening sounds and clues, but when a Killer is just lurking in the background, waiting, it can throw even veteran players off their game. Despite the cartoonish mask, Ghost Face‘s speed and skulking turn him from a joke into a terrible fright.

When it comes to the Dead by Daylight roster, it’s the smaller killers with unique skills that tend to get the most spooks. However, the Oni is a special kind of hulking terror that sends Survivors to their knees. A deadly combination of power and violence, the Oni can down a Survivor in one fateful swing and instead of cleverly sneaking, charges his way across the map. With an Oni, it truly feels like you’re being hunted by a predator instead of a straight-up Killer. That’s terrifying.

As much as we love The Plague, The Spirit is what the Plague wishes she was. The Spirit is beautiful and haunting, but she also actually has the ability to scare players. Not only are her glass-shatter-inspired movements and sounds irksome, but her phase-walking leads to a host of surprising jump scares. She’s one of the best Killers in the game for design and power, so all Halloween lovers should bow down to Rin Yamaoka and her ghostly katana.

What else is there to say? Of course everyone’s favorite not-so-shirtless daddy Myers is the scariest man in the game. Looking up from a generator to see a Michael Myers, AKA The Shape, staring at you from a dozen yards off is the most horrific feeling. Worse, he’s got an entire arsenal of ways to spook people. At the beginning of the game, his stalking and staring are deeply unsettling. But once Myers has higher levels of Evil Within, he starts downing Survivors left and right. And if he has Tombstone or other late-game perks? Any good Myers player will make you want to cuddle up in your blankets to recuperate from the experience. It’s no surprise that the iconic Halloween killer is also the iconic spooky Killer of the Halloween-holiday-inspired Dead by Daylight, too.