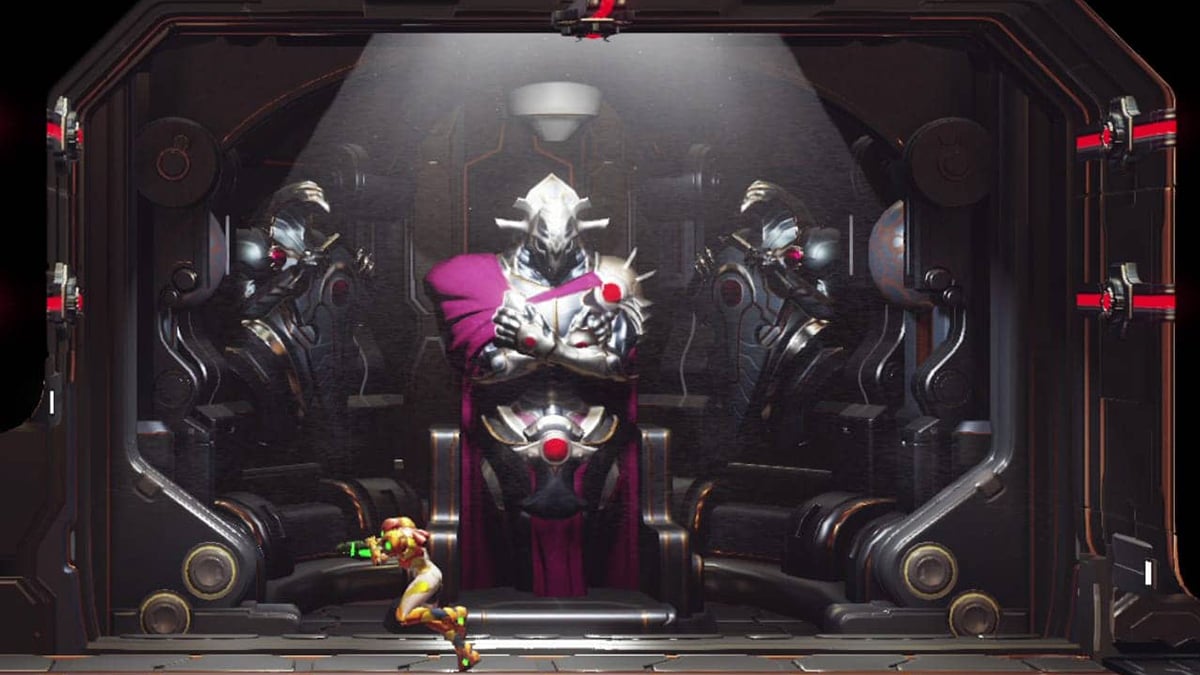 It wouldn’t be a Metroid game without some Chozo ruins, and Ferenia ticks that box for Dread. This rundown base is where you’ll meet Quiet Robe, but that character is far from the only thing to find here. The Chozo have plenty of secrets, after all.

Those secrets include collectibles like Energy Tanks, Missile Expansions, and Power Bomb Tanks. If you want to find them all in Ferenia, we’ve got you covered.

This is found in a room adjacent to the southeastern Save Station. Head there, defeat or dodge the laser bot, and enter the Morph Ball tunnel to drop through the Pitfall Blocks. You’ll see the Energy Part in the lower part of the room; roll in and drop a Bomb to reach it.

Getting this Missile+ Tank involves one of Metroid’s infamous Speed Booster puzzles, though this one isn’t too bad. Start from the tram to Ghavoran and run toward the structure, activating your Speed Booster ability as you go. Once inside, leap onto the ledge and wall jump backwards above the door to maintain momentum. Slide as soon as you land on the ledge to slip past the Pitfall Blocks and roll into your Morph Ball into the pocket on the left – store a Shinespark jump as soon as you do. Now quickly roll back a few feet, blow away the Bomb Blocks, and release your Shinespark to rocket to the ceiling above. You’ll catch the ledge with the Tank on the way down.

There are some hidden Bomb Blocks near the flooded area southeast of the tram to Ghavoran. Approach from the high ledge on the eastern side and use your Morph Ball jump to leave a Cross Bomb in the air. When it explodes, you’ll see the path up. Use your Space Jump to wriggle in there, where you can grab the Missile Tank inside.

There’s another Speed Booster puzzle in the room to the right of the western Dairon elevator. Charge up from the elevator room, store a Shinespark when you move through the door, wall jump up to the ledge, and quickly slide into your Morph Ball form. From the corner, you can launch diagonally right into the Missile+ Tank. Alternatively, you can Bomb through the blocks and launch straight across in midair if you’re fast enough.

You’ll find yet another Speed Booster puzzle in the cold section by the EMMI Zone. To dash through the left-hand wall, you’ll need to charge up from the other side of the nearby door. Once through, you’ll need to make a second pass. This time, store a Shinespark as you hit the spot you just broke through, shoot through the blocks below, and tuck into your Morph Ball at the bottom. Then you can launch yourself directly to the side, right through the icy tunnel. The Missile Tank will be above you at the exit.

This one’s easy to find. There’s a tower in the southeastern corner of the map. When you reach it, scale to the top by shooting out the various Beam Blocks. In the top-right corner is a Missile Block you can destroy – it’s holding the Expansion inside.

This Missile Tank is right next to the Cyan Teleportal. Shoot out the Beam Blocks and Space Jump up to reach it.

Start from the eastern elevator to Dairon and go through the next door. Climb to the upper ledge, then Space Jump up to the tunnel in the ceiling in the next chamber. Tuck into the duct with your Morph Ball and Bomb the block along the way to reach an Energy Part.

There’s a tricky Bomb block above the water right by the room where you get the Space Jump ability. To destroy it, roll of the upper ledge, bank left, and drop a Cross Bomb to open the way. Now take the Morph Ball tunnel into the next room. Jump onto the right end of the platform – the rest is made of Pitfall Blocks – and use your Wave Beam to shoot the explosive rock in the corner. Now you can drop through those Pitfall Blocks and Space Jump your way up and around to the Missile Tank.

You’ll need to do another tricky jump to reach this Missile Tank. From the previous one, weave south through the Beam Blocks to the room with the sloping roof. Take the Morph Ball tunnel to the next room. To destroy the Bomb blocks here, you need to leap toward the wall and deploy a Cross Bomb in midair. Now quickly loop back around (since you’ll likely fall through the Pitfall Blocks) and Space Jump your way up to the ledge with the Expansion before the Bomb blocks reappear. You can also use a Power Bomb, if you have them, to forgo the need to loop around.

There’s a block puzzle above the Energy Recharge Station east of Ferenia’s large central chamber. Screw Attack through the blue blocks on the left to get up there, then roll off the top ledge and deploy a Cross Bomb to destroy the Bomb blocks. Quickly loop back up here to the lower row of Bomb blocks so that you can yank away the Grapple Beam Block. Now you’ll need to repeat the Cross Bomb maneuver, loop around, and catch yourself with a Space Jump to grab onto the tunnel ledge. Roll into the next room, Bomb the blocks in your way, and jump up to grab the Energy Part around the corner.

There’s a whole section to the left of the western elevator to Dairon, but you’ll need the Gravity Suit to move through the cold zone and the Wave Beam to go through the door to get there. Weave through, back around to the elevator, and you can shoot a cracked wall and the explosive sac beyond to connect the path back to the elevator. There’s also a Speed Booster puzzle here. Run right to left in the tunnel to charge up, then run up the ramp using your momentum. Store a Shinespark jump at the top of the ramp, quickly tuck through the Morph Ball tunnel, and Space Jump up the next hill. From there, launch straight up to break through and reach a ledge holding an Energy Part.

This Power Bomb Tank is in the ceiling in the lower part of the EMMI Zone. Drop a Power Bomb from below (it’ll still clear the block up here), then Space Jump up to reach the Tank.

There’s another Power Bomb Tank in the large central chamber. Drop a Power Bomb from the platform above it to clear the blocks, then Space Jump into the small gap from below to grab it.