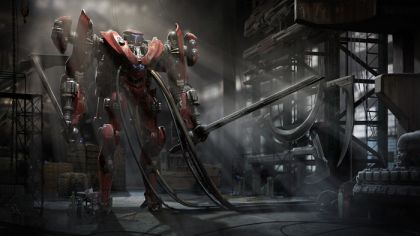 Spark Plug Games has just announced “MechRunner” for PlayStation 4, PlayStation VITA and PC. It’s an endless action game that casts you as a powerful mech in stunning cinematic battles against a relentless robotic army.

MechRunner will feature three main characters (Jesper, Allison, and Gen. Petrakoff) in an event that takes place on June 30th, 1908 where a mysterious explosion takes place over the Tunguska River in Siberia, Russia that wipes out trees and wildlife for over 800 square miles. To this day it remains the largest “impact event” in our planet’s recorded history.

The game is a “runner” in which the player is constantly moving forward while tracking down lethal O.S.O. forces but what makes it special is that you’re piloting a giant robot capable of some serious destruction! Other endless runners feature action elements, but none like this. Heat seeking missiles, heavy caliber bullets, laser cannons, and concussion bombs meet destructible buildings, debris littered streets, and tons of slice-able enemies to create a fast paced, visually stunning experience!

Listed below are features that MechRunner will offer:

Watch debut MechRunner trailer for PlayStation 4 below and also take a look at few in-game screenshots.